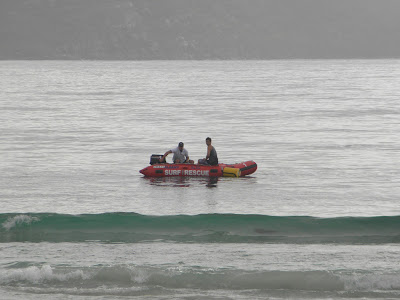 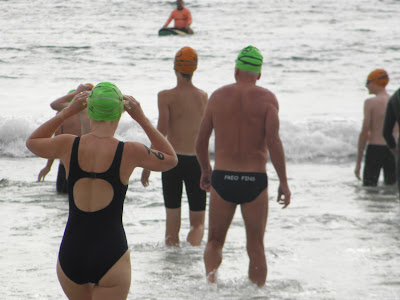 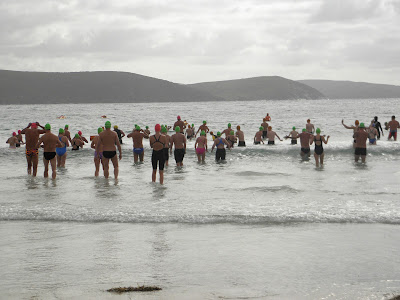 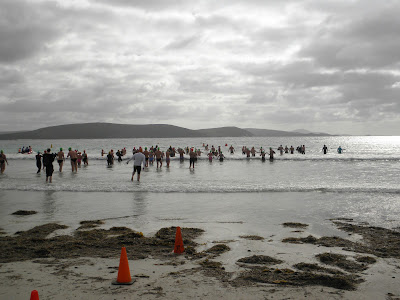 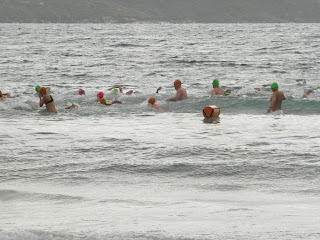 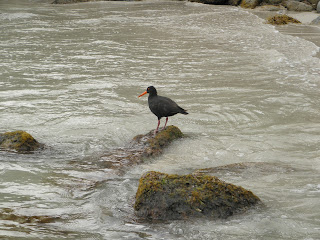 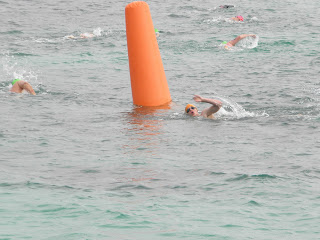 Into the sea ...
Stormboy's father and I watched him compete in the Surf Lifesaving Club's Open Water Swim on Sunday morning. Stormboy would just die if I posted the photo of his (buff) self of thirteen years emerging from the waves - but that is him in the last shot, rounding the final marker for the run home.

I was so proud of the boy! Like me, team sports leave him quite cold. Our frailty lies in having no hunger for the ball - if you actually get hold of it - every other bastard is gonna jump on you and wrestle it back. Stormboy has found his athletic niche in those steady, meditative laps of the pool and understanding the power of the breaking wave.

As a babe, he wriggled out from every name we tried to pin on him. When he was three weeks old, an Aboriginal woman sat next to me in the park and asked what he was called.
Rueben ...
Sonny ...
Joshua ...
"He doesn't have a name yet. He's a tricky one." I told her.
She snorted and looked at me. "He's got no name? You gotta give him a name!"
Another week later and he was annointed with the name of the ocean dwellers of Celtic legend. It was perfect. And so it goes.
Water water ... and into the sea.
Posted by sarah toa at 7:52 PM 11 comments: 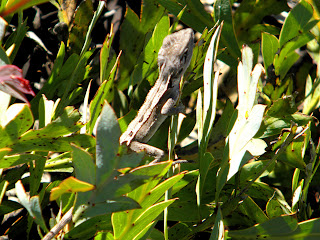 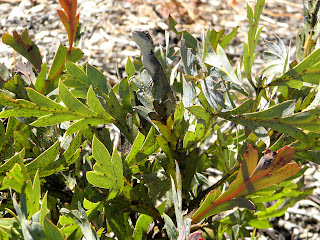 For folk interested in the Fitzgerald Biosphere, the Narpalungup Nature website is one of those gorgeous, bright riverstones ... the Ravensthorpe Ranges, the Barrens (as pictured), Pallinup, Bremer Bay and the Fitzgerald National Park.
http://narpalungup.com.au/
Posted by sarah toa at 5:05 PM 1 comment:

It is so hard being an idealist in this world. I  once adored the man "who dances like a broom", (thanks Seashell) who sang songs of nuclear disarmament and treaties. Suddenly I am a groan up. The tooth fairy was extorting me for the teeth I forgot to leave in a glass of water, Santa thought I deserved puppy poo on the fireplace rug and Peter Garrett, the Environment Minister was soothing us rabble with platitudes about ending Antarctic whaling while he tried the "okay, but just put it in a little bit" line with the International Whaling Commission.

Tooth Fairy, Santa and Peter Garrett aside, (and this is a slight digression but bear with me) there is another man who manages to blunt every nasty needle taken to an idealist's balloon. (Now, how was that for a mangled metaphor? I've outdone even myself.) I met this man in a field surrounded in Karri trees, during the mid 1990's Forest Blockades. It was night time and all around me leapt other idealists of the same ilk; their bodies painted with ochre, their fire poi primed with kero in the long grass, awhoopin' and ahollerin' among the teepees and bonfires and naked babies and ladies.
A tall man in a green shirt stood beside me. "Hi, I'm Bob." He shook my hand.
"Well, of course you are Bob!" I was so blown away that Bob Brown needed to tell me his name that I completely forgot to tell him mine. Dammit.

So, this post is about Bob Brown, Wikileaks, spy planes and Peter Garrett. On New Year's Day and the next, Wikileaks released the embassy cables between Tokyo, Canberra and the ominously titled 'State' (I think that means the U.S.) discussing last year's IWC talks. Anyone who has been reading A WineDark Sea from this time last year will know I am particularly interested in last year's spy planes controversy. Japanese whalers, The Institute of Cetacean Research, hired public relations company Omeka Communications to hire Australian planes to find the whereabouts of the Sea Shepherd fleet. Some of these planes refuelled at my local airport. Once the Sea Shepherd protestors were spotted, the whalers were able to peacefully kill whales somewhere else without being chased, harrassed or having butter bombs thrown at them.

About this time last year, Bob Brown started agitating for an inquiry into the practice of the Japanese hiring Australian planes. " ... the Australian Government is doing nothing about it and is allowing Australian facilities to be used against the whale protesters."  He raised the point that if Australian ports were closed to Japanese whalers, then why are our airports open?
(www.abc.net.au/news/stories/2010/01/06/2786195.htm)

Albany airport workers reported a refuelling operation supported by "truckloads of cash." The Humane Society considered taking aviation companies who hired planes to the Japanese whalers to court. Once they had proved that the whalers were working inside the Australian Economic Exclusion Zone, it was possible that the aviation companies could be charged with aiding a criminal act.
The whole story seemed to fall to bits when the Ady Gil was rammed and sunk.

But maybe it didn't. The Wikileaks cables show that Tokyo, Canberra and the State were a bit alarmed with Bob Brown's calls for an inquiry into the spy planes. A month later at the meetings with the IWC, Garrett's take on the situation was "This is NOT good."
I'll cut and paste some relevant paragraphs of the cables below, with link on each number and reference identifications. It's interesting reading ...

4. (C/NF) Garrett Chief of Staff David Williams told econoff
that the GOA could accept a compromise that delivers a much
Qthat the GOA could accept a compromise that delivers a much
lower level of whaling, but it has to be accompanied by
signals of commitment to address other key issues -
sustaining the commercial moratorium, keeping whaling out of
the southern sanctuary areas and Australian antarctic waters,
bringing all whaling under the control of the IWC, and
preventing future scientific whaling. Absent any signals on
these areas, Garrett and other political leaders will be
under consistent attack on a deal that only addresses
numbers, however low. Williams was careful to say that
Australia would not act precipitously and would signal its
intentions clearly. Pol-Econ Counselor and Econoff both
echoed Commissioner Medina's message (ref email) on the
importance of staying at the table to Dewar, Williams and
Watt.
CORAL TRIANGLE INITIATIVE
CANBERRA 00000093 002 OF 002
2. Garrett said
the negotiating process had largely ground to a halt, with no
"real" proposals on the table. He said legislation pending
in the Australian parliament (introduced by the Green Party
on February 4 to examine the role of "spy flights" in Japan's
planning for this year's whaling season) would strengthen
anti-whaling sentiment in Australia, making it difficult for
the government to accept the current proposals. Garrett said
the February 22 IWC Small Working Group briefings, which will
alert the NGO and global community to the state of
discussions, will be key for Australia's policy on the
negotiations.
Reference ID 09TOKYO2529  Created 2009/11/02
¶2. (C) Yamada inquired about an investigation into the tax
status of the U.S.-based NGO Sea Shepherd Conservation
Society and repeated Japan's request for the U.S. to take
action against the organization, which he said created a very
dangerous situation on the seas. The DCM replied that the
U.S. places the highest priority on the safety of vessels and
human life at sea, and added that if any violations of U.S.
law are discovered, we will take appropriate enforcement
action. Morishita went on to say it would be easier for
Japan to make progress in the IWC negotiations if the U.S.
were to take action against the Sea Shepherd.
ROOS
Reference ID 09TOKYO2588   Created 2009/11/09
Posted by sarah toa at 9:32 PM 3 comments: 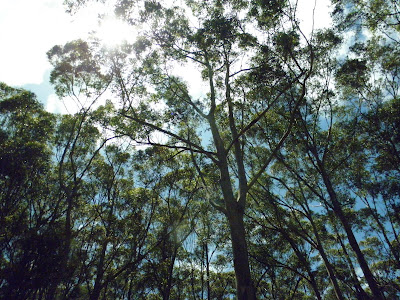 Cicadas singing in the Karri forest,
Waking in a canopy dappled tent
After a night of Mood Swings music and dancing
Into New Year's Day 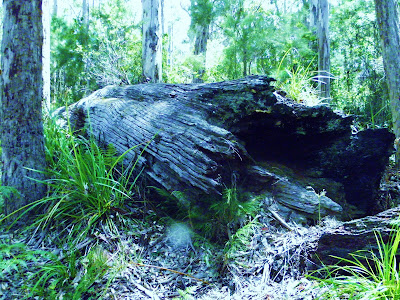 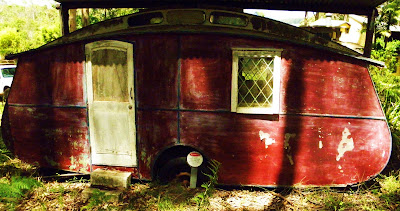 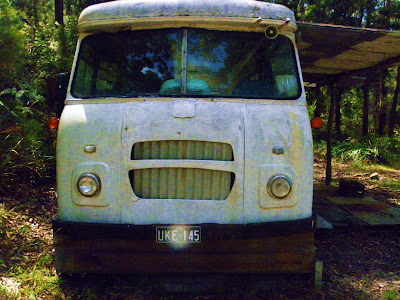 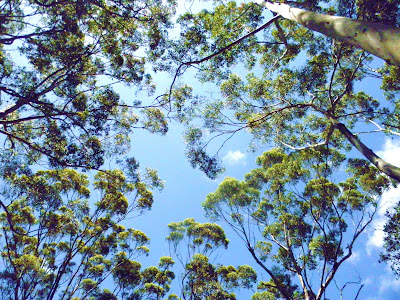