Head in the clouds

Zero visibility in the tower. I’m literally in the clouds, I can see mist rolling over the granite and swallows flitting black against the white. The spotter pilot radios me from where he is taking off in Albany. ‘What’s going on over there, Tower?’

‘Nothing!’ I wail. ‘I can’t see past the granite. Fives all round.’

‘Do you think it’s clearing to the north? Over.’

I try to part the clouds to see. ‘I can’t see anything Tim, I’ll call you when it clears, over.’
The spotter calls in to say he’s taxiing and how many minutes endurance fuel. I settle to stare at the wall of white all around, a beautiful green bug with filigree wings on the glass, and I let my thoughts run away. When sea levels rise, will this mountain still be 420 metres above sea level? Will they have to change all the elevation maps in the world? Shopping list. I need some lamp batteries and some milk and dog biscuits. I hope they grade that blasted track soon. Why do icebergs calve? I can hear the Nankeen kestrels to the west of the tower. What do the wedgetail eagles think about on days such as this?

I decide to cut my hair. There’s a nice sharp pair of scissors in the supplies box. I hold ringlets of red against the white sky and cut off the shaggy ends. I throw the offcuts out the window for the birds and possums to line their nests with. What would a man, a princely sort, think now, I mused, chopping at my curls. To part the mists on the arduous climb to the tower, only to find her cutting off her hair? A radical act of anti-Rapunzelism, that’s what he’d think.

‘Juliet Romeo 146,’ the spotter calls in his coordinates. The universal alphabet. The universal trope of fateful lovers. At least Rapunzel came out of it pretty good. Didn’t she? I can’t remember. I’ve been up in the clouds too long, watching the white wall. 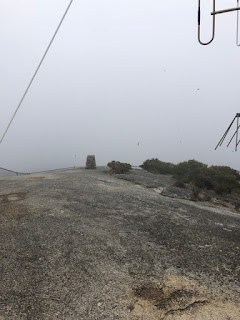