History With That Sea Witch

Flinders
Every morning Matthew Flinders puts on his white shirt and treads the pathways through shafts of steaming, green light. The gravel in his bladder is getting worse. He chafes at his gaoler Daecan, that vindictive upstart Gaul. He worries that the French governor will steal the map Flinders is working on, to further his own flailing career. He also pines for his Anne. He is embittered, incapacitated by the coitus interruptus to his marriage and to his life’s work.
After his daily walk, he returns to his hosts, the beautiful French women of Mauritius. They give the handsome Englishman succour, enchanted by his condition of house arrest. One of the youngest sisters wants to marry him. Her slender white neck and doe eyes bother him.
Blame it on Calypso, he thinks. There is a history with that old sea witch.
Calypso
Calypso awoke in her cavern to the alarmed shrieks of the raptors.  She went to the sea shore and the man stumbled through the shallows towards her. Calypso, that lonely island beauty, sighed with relief and welcome, her arms outstretched, her hips swaying with shells and feathers. She took him into the cavern and fed him heady wine, the juicy flesh of abalone. She laid him out on the furs of her soft bed and watched the wrecked sailor sleep for two days.
She tried to make Odysseus forget Ithaca and Penelope. She offered him immortality and managed to detain him for seven years. But Odysseus pined. He wanted a full life, not an endless one. He stared out to sea while Calypso tended to her sea crows and falcons. Every morning he would walk the island while she dived for crayfish. One day, in her soft bed, he turned away his head.
Indiana Jones After the Party
Away from the gleam of winter stars, Calypso sheds her belt of seals teeth and seashells. Indiana Jones pulls pelican feathers from her wind-tangled hair. Outside the motel room, cars wait like tethered ponies. Outside, her sea crow clatters on the tin roof with impatient, flat feet. Sea storms the shore. But in here it is warm.
“Take off my dress.”
“You take it off.”
“Take off my dress!”
“I want to watch you.”
Calypso takes off her dress. She minds the wounds of Indiana Jones. She licks him well again.
A cold alarm bleeps at five in the morning. He dresses and pats himself down.
“Stay with me,” she says.
“Today, Calypso, is a most important day. Much travel ...”
“We’ll have some breakfast and I’ll take you to the sea shore.”
He searches for his whip and his whiskey.
“Stay with me ... “ she will not beg. “Is it not good enough that I receive you, I nourish you, I lick the briny from your barnacle’d wounds?”
Poor, lovely Calypso. She wonders if she may be wiser to find work in the mines, join the yacht club, internet dating maybe. It has been this way for millennia, she thinks. The moment a questing sailor wades wounded and broken into her arms is the same moment he begins planning his escape.  Calypso strokes her golden thighs and jingles the sea shells. Their focus on their quest is admirable, she muses, if a little misguided. 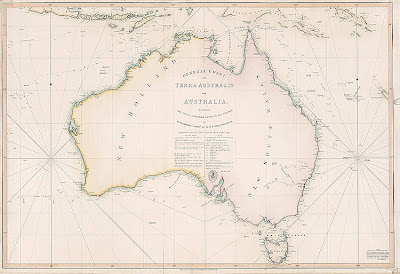 In the 1940’s, writer Ernestine Hill sailed through the Gulf of Carpentaria with a fisherman who seemed to know his way.
“Whose chart are you using?”
“Flinders’. No one has produced a better chart in the last century and a half,” he told her.
The Greek Myths, Robert Graves, 2002.
Map by Matthew Flinders, National Library of Australia.
My Love Must Wait, Ernestine Hill, 1941.
Posted by sarah toa at 9:16 AM