There was a big moon, and then another returning, her belly swelling. All the time we lived on the quiet waters bound with stone, I did not question the Maori’s lack of kindness in keeping me from my people. I was glad for the peace.

At night, we fished.

I was the tallest girl, the tallest thing on the whole inlet and above me the stars blazed and the quarter moon glowed the water. I forgot my sadness, my loss and the angry tinglings of my diseased sex when the little boat grunted over crunchy coral and I spread my toes over the thwart of nets and punted out into clear water again.

William Hook forced a stake into the soft sand of the shallows, moving it in a figure of eight to ease it in. He looped the cork line around the wood. The boat lurched with his weight and I spooled out ragged net, while he rowed.

A little time later, we went back to the stake.

"Feel this," Hook handed me the cork line.

I took the wet, muddy rope in my hand. I felt the fish hitting the net, a sharp tug like when they take a baited hook. Then a flutter, a lighter hit, as they struggled. So I knew there would be a few.

I woke early when the air was still and cold. The wind stopped. Fire, a carcass.

I left my skins to squat a little way from camp, drove a neat hole into the gritty sand with my stream. I watched the dark loom of the Maori.

He stood just on the lacy edge of the water and strange blue lights shot out of his toes. Hot blue bullets fired away from his legs.

I heard the girl breathe in, quick.

Each step into the sea, as we pushed out the boat, created flaming motion. Every stroke of the oars made a sparkling rush of sun diamond water in the inky brine, and then the dripping airborne oars traced arcs of wild colour beside the boat. Shrimp became tracings and drawings, stars falling through the sea.

Still dark and starlit, with the moon gone, it was what William Hook called a 'piccaninny sunrise', with a sly smile in the way of the girl, a little sunrise, no light yet but a sparkle in the eye of a new day.

Fish flew away from us leaving a comet tail of blue fire in their wake. The Maori rowed and rowed, straight past the stake in the sand that held fast the net and none of us dreaming folk even noticed, until we were well out into the centre of the inlet.

"There won't be fish tonight," he told me. "Net is lit up like a Chinaman's birthday."

I could see every single mesh shining blue, soaring up towards Hook's grappling fingers and swooping down into the water, gilt with glittery magic.

We caught a few, yes, some gleaming fat skip jack. By then the sky was lightening and all the fire creatures melted back into the secrets of the inlet. 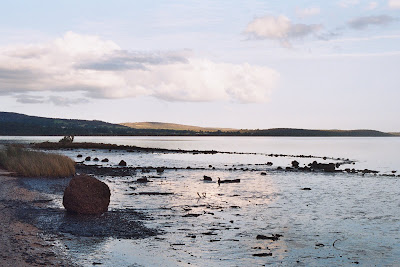 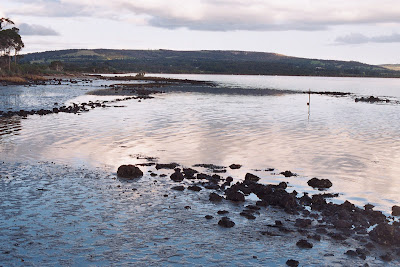 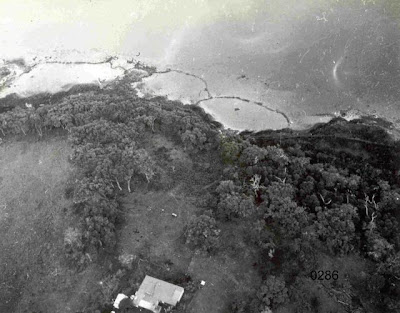 We live in a land surrounded with water and yet defined by land. It's always been about the land. Our national infrastructure is laid out over ancient tracks, waterhole to waterhole, superimposed over Songlines. Rail, highway, wheat, sheep, gold. Appropriation.

What about those other highways? We can't fence off the sea. The sea is amorphous, unfencable, uncontainable. We can't peg it out, despite longitude and real estate agents.
To use the sea as a highway and dwelling place, takes understanding and respect. There is a kind of anarchic democracy intrinsic to sea going people because, although there may be staunch hierarchy, dictators tend to stain the brine with blood pretty quickly - just look at Captains Bligh and Ahab.

When the sealers roamed the southern seas, their plan was often to stay out of the way of authorities and fair enough. Many of them had felt the lash and the cold stone of Port Arthur. Their living and happily subsisting on the islands without need to 'settle' land drove the authorities into nervous paroxysms. Their kidnapping of women for slaves and wives had to be stopped. At the same time, settlers were kidnapping Tasmanian children for servants and then abandoning them as adolescents, a black line was walking the country and the policy of the day - assimilate, relocate, eradicate.
In one of history's strange ironies, the 'reprehensible' sealers were responsible for the survival of more Tasmanian Aborigines than any other group of people.

It drives land-hungry governments nuts. People who live on the ocean and move between islands often wear the tag of brigands and banditti, pelagic ferals, rootless, outsiders. These tags are bestowed upon them by someone sitting inside at a news desk, or administrators and D.E.C. bureaucrats (Sorry, that just slipped out).

There's so much in this argument - the Fletcher Christians of the world, the Pacific Solution, Border Control (the musical), the trawling communities up in the Gulf of Carpentaria. I had a great conversation* today with a maritime archaeologist, Mr Wolfe, and I have to credit this post (however confused, hang in there, I'm still making it up) to him for planting a precious seed that I hope one day will grow into a forest of sleek and snaky bull kelp.

*This conversation began with my offering to show him the pterodactyl skull, covered in barnacles, that I found in the nets this morning under the Kalgan Bridge. Turns out it was a rather unseaworthy emu.
Posted by sarah toa at 9:56 PM 6 comments:

"Tye.ree.lore - Tasmanian name for the women held in slavery by the sealers." G.A. Robinson, 1830.

Robinson - the man who tramped Tasmania on a 'Friendly Mission' to relocate the Van Diemonians somewhere, anywhere to get them away from the Black Line - did not like the Bass Strait sealers.
Here are some of his reasons, embedded into the fates of five women. Try speaking their names out loud, they are lovely to roll off the tongue.

Make.ker.lede.de* (Sall) Nth of Bruny Island. Abducted by Baker, a man of colour. Now with William Cooper, a sealer. At Kangaroo Island (S.A.) Sister to Trugernana.

Drum.mer.ner.loo.ner (Jumbo) Age c19. Nth of boobyalla River(??Little Swanport) Removed from her country when a child by James Munro, who has cohabited with her ever since. Said to have aborted a half-caste by beating on her belly.

Mee.tone.yer.nan.yer (Dumpe) Age 20. nth of Tomahawk River (Waterhouse Point) Abducted by George Briggs. Later escaped and returned to her tribe. Again taken, this time by Tucker. Has a husband among the blacks. She has killed several children since she has been with the sealers.

Tare.re.nore (Walya) Nth of Mersey River. Abducted by sealers but later rejoined her tribe (escaped). Responsible for many outrages in the settled districts. Later joined the sealers again.~

Woreth.male.yer.pood.yer Age c23. Nth of Piper River. Abducted by James Everitt*, by whom she was murdered on Woody Island. Everitt was by then a member of Thompson's boat and after the murder Thompson lent him Wot.te.cow.wid.yer.


*Makerlede was most likely one of the Van Diemonian women who came to Albany in 1826 and kept going to Mauritius, via Amsterdam Island.
~Walya was famous for leading a guerilla band of Van Diemonians in warfare against the European invaders. Story has it, she was abducted by sealers and learned very quickly how to hate and how to shoot. Note how close her name is to 'Island Wife'.
*James Everitt was living on Breaksea Island, Albany in 1826. He was involved in shootings and abductions there as well.

It's not easy to remain objective about the sealers, when I read the names of the women ... 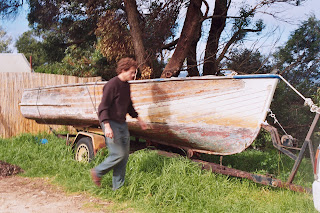 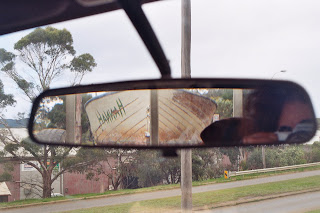 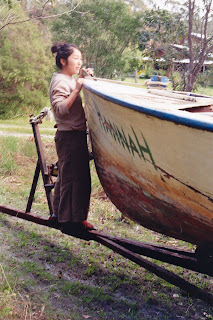 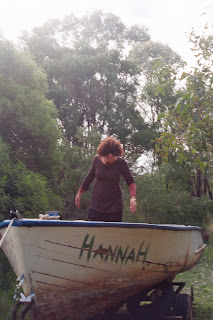 And so the Pearl is delivered drama free to the home of the New (wooden boat) Romantics!
Posted by sarah toa at 1:46 PM 4 comments: 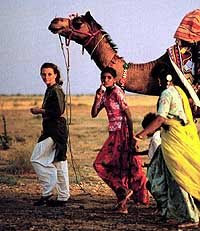 "So what are the qualities that nomadic cultures tend to encourage? It seems to me that they are humanistic virtues. The world is approached as a series of complex interactions, rather than simple oppositions, connecting pathways rather than obstructive walls.
Nomads are comfortable with uncertainty and contradiction. they are cosmopolitan in outlook, because they have to deal with difference, negotiate difference. They do not focus on long term goals so much as continually accommodate themselves to change. They are less concerned with the accumulation of wealth and more concerned with the accumulation of knowledge. The territorial personality - opinionated and hard edged - is not revered."

On the Rabari women, Gujarat ...
"These women owned property in their own right (receiving sheep from their husband's family at marriage and inheriting their mother's jewellery), and although they did not sit in panchayats, no one doubted who made the decidions at home. They were not burdened with childbearing during their teens (and seldom had more than four children). Their work was as valued as the men's. They could shop and do business in villages and towns without being chaperoned and without covering their faces. I do not mean to say that individual women were in any sense capricious regarding community law. Only that the power between the sexes (that inherited species disequilibrium that culture endlessly mediates) was balanced, so producing a confident sauciness in the women and a humerous appreciation in men. 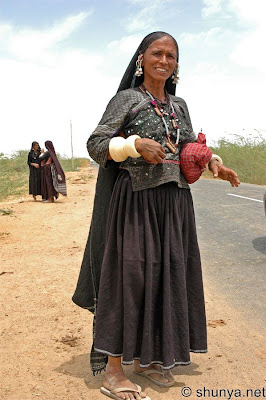 Later, after I had left them, I came across other Kutchi Rabaris who had settled. Within a generation, the women were in strict purda, usually a hot compound at the back of a house, where they lived like caged parrots. By day they were bent over in the fields, digging, watched over by the patriarch. Or they worked and cooked in the stifling compound. At night they were locked in. They did not mourn the loss of their freedom. How could they? They had nothing with which to compare their lives. but I could compare them with their still nomadic cousins, whose men looked at them with affection, respect and not a little awe, who could stride out unchaperoned, haggle with shop keepers and fight with their slings beside their men."