The Sound of a Podcast 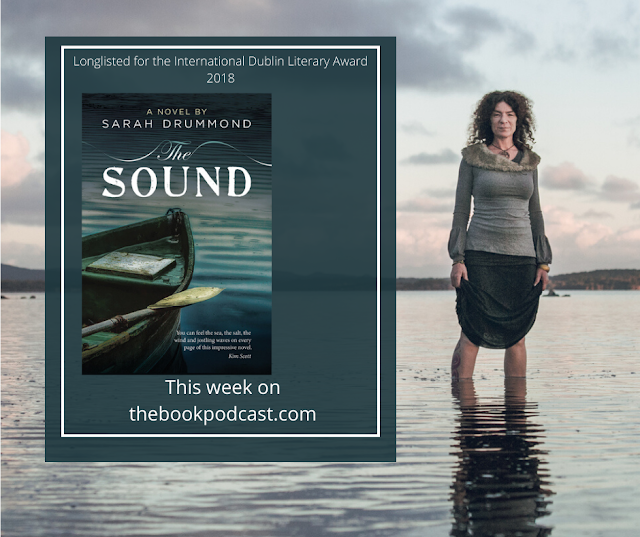 I'd almost forgotten what a ripping yarn this is. Rosemary Puddy who runs thebookpodcast has rerecorded my interview with her from a few years ago. Have a listen. It's great.
Here is the link: https://bit.ly/TBP019
Posted by sarah toa at 3:45 PM 10 comments:


I just love this album Spinifex Gum. It's a collaboration project between the Gondwana Children's quoir and Felix Reibl from Cat Empire and includes contributions from Peter Garret and the rapper Senator Briggs among others. Most of the songs are framed around our north west and issues like mining and land, river course usage and native title.
Posted by sarah toa at 11:19 AM 2 comments:

So I have the inverter, humming like a tuned-up tractor, beside me. Actually it sounds like a suburban neighbour's leaf blower on a Sunday morning, but who am I to complain about having internet at home?

Today I'd like to talk about iso injuries, that is, the injuries sustained by a planet of humanoids isolating in their homes for a sustained period. No, not really, just little ol' me confined to work from home, or the local laundromat, or Flame's back veranda. Wherever there is internet anyway. I'll list this litany of personal injuries not in chronological order but based on the fact that they are all related to my own state of mind due to lockdown.

Nora Ephram once wrote that she was raised to understand that "all painful things eventually turn into funny stories." I can't agree more with the woman who was once married to Watergate journalist Carl Bernstein and who also said "everything is copy." She went on to write a savage take-down of the end of their marriage in novel form. Like she said, everything is copy and pain, on later reflection, can be pretty bloody funny.

I was watching my dog limp. Selkie is one of those unber-healthy dogs with a glossy coat and bounces around like Tigger. Seeing her in pain was awful and it looked like she'd broken a bone in her foot. She has a round, every morning in the place that is dog heaven. Just before dawn she takes herself off for a run along the beach, heads into the bush and returns forty minutes later, panting and chuffed, often with a kangaroo bone. She is a dog without fences or roads. Imagine that life for a dog. This particular morning she returned a bit subdued and limping badly. It was in the first week or so of our Australian lockdown. I had the sniffles and decided not to travel 200km to video conference a Noongar elder for my teaching job.

Instead, after 24 hours of spinning out about my injured dog and how far we were from the nearest vet (100km), I went all Dr Quinn Medicine woman on her and administered comfrey to her foot and bound it up. By the time I got her to a vet, he took one look at her, rotated her back knee and said, 'Well I won't do that again. It's obviously causing her pain. It's her cruciate ligament. Here's some anti inflammatories. If she's not better in a week, it's surgery.' He threw my bandages and unguents aside. My brain bled, with dollar signs leaking out my ears, as I lifted the 40 kg rottweiler cross back into the car.

This is obviously not an iso injury but it made me feel really vulnerable. I sent messages to my son who by then lived across a closed border from me. 'Let me look after her, I'm closer to the vet' he replied. 'There must be a way to get a dog across the Frankland river. I'm about to kill a sheep, so I can get some chops and potatoes to you at the same time.' Blessed Stormboy.

At around the same time, some friends went picking field mushrooms and gave me a mass of them chopped and wrapped up in a happy christmas tea towel. Any of you who know me well know that I love eating mushrooms and I do know a bit about which ones to eat. So I set about making a cream of mushroom soup and that night I ate the lot. So yummy!

The next morning I woke up with a fever, I was shaky and then I started vomiting. I felt like I'd been poisoned and poisoned I was. Once again I felt terribly vulnerable. I was 100km from the nearest hospital. Could I drive there? Would I have to park my car on the highway ten km off the dirt track, put on my hazard lights and hope for a passerby to help me out? The roads were so quiet. Normally I'm quite the mountain woman but times like these make me feel inconsequential. My nearest neighbour is 25 km away.

I cured myself with red gum resin made into a tea. Worked a treat. Then I swallowed half a cup of petrol due to an unfortunate and aborted internet installation. Then I rolled an ankle wading through the water to pick up a net full of mullet. Then I sprained a thumb on the next week's mullet set. "What the fuck is that Brown Thing in the net Boo?" "It's your Croc Sarah. It seems to have come loose from your foot." "Oh ... good. Whoops!"

You'll be happy to know that my lungs (from breathing in petrol), my stomache (from ingesting petrol and poisonous mushrooms) and my dog are much better now. My rolled ankle and my thumb still hurt a little bit. However I think that, while I'm normally pretty good at looking after myself, especially in the isolated areas where I often live and work alone, I've been a bit slap dash on the personal safety front lately. My next post will be about the pig hunters and their dogs who upended my zoom meeting with my boss.

Hope you are all well bloggers. Stay sexy x

Hiatus, a missing period in time. The geological origins of the word describe a period of time in a rock record that is missing. There's a gap in the chronology. It's also a gap year of bad hair cuts, burns from heroic attempts at baking sourdough bread and people proclaiming daily that they've always been good at isolation. I'm one of the latter, though I gave up early in the game as too many others who live in suburbia were saying the same thing. By now, all our lovely seedlings are sprouting after the last great vege seedling shortage. Either that or they've withered in their egg carton trays and nurtured only by the tears of frustrated first-time gardeners. I'm smug to report that I now have a grazing bed of rocket and coriander outside the front door and the purple beans are shooting up the karri hazel sticks like the proverbial beanstalk.

Okay, so enough of the hubris. I've been putting it off, but here is my proper post in a bloody AGE. As a result of a federal government initiative on internet blackspots (and I'm in the mother of blackspots here) a technician turned up a few weeks ago and put a satellite dish on my roof. While he was trying to boot it up, and while I was a little bit obsessed with the fact that there was actually a man in my house, he realised that my tiny solar panel in the shady forest would not give us sufficient electricity. 'Shall I start the generator?' I asked. I know genny surges are not great for digital equipment but he'd driven a hundred kilometres and then another ten along a bush track to get here. It was the generator or nothing. Five minutes later the engine ran out of petrol. I had some more in the boat motor and prayed that marine oil in a four stroke generator wouldn't do it too much harm. I got a hose and started siphoning. Yep. I swallowed about half a cup of fuel and realised later that night I'd also inhaled some into my lungs, as I was breathing air in and petrol fumes out. What was even worse, at the time the technician was watching me and saw the whole thing. We still couldn't boot up the internet and eventually he left in disgust, saying 'I'm gonna have to come back,' while breaking out in an anxiety rash and kicking my dog out of his car.

Three weeks later he came back. I'd organised an alternative power source. The solar power company in the nearest town have been ghosting me since they realised how far away I live, so I'm on my own when it comes to setting up a decent power system. Anyway, the technician returned and within fifteen minutes, he'd pulled up the Bureau of Meteorology website on my laptop. It was the strangest feeling. For five years now I've lived off grid and out of range and there is the latest weather on my computer. 'I would give you a big hug ... if I wasn't about to give you a terrible disease or something,' I said. He took a step back and said, 'Steady on there,' but I could tell he was pretty pleased.

The first thing I did online was send an email to the people who own my house. First White Woman in History Sends Email From Broke Inlet. 'Oh wow!' she replied. 'This is like the moon landing.'

Indeed. My next post will be about the various and bizarre iso injuries I've managed to inflict on myself and how a zoom meeting with my university bosses in my in range spot in the forest (pre moon landing) was hijacked by a mob of pig hunters and their dogs.
Posted by sarah toa at 6:58 PM 8 comments: