the things I haven't told you


It was September and didn’t even feel close to an end of the dark winter. As we know now, things got worse but this is a good story in the midst of all that; the day I found my friend again. It’s a good story, I told myself. It’s something good to hang onto, a story of reconnection and warm wonder in all the black chaos of the Monkey year.

Walking up the track at Broke Inlet that September day, I saw her standing in the doorway of one of the old huts. She was unmistakable. Tall, curvy, a hank of long black hair over one shoulder, and something about the way she stood. Of course it’s you, I thought, miles from anywhere, at Broke Inlet. Of course. We both yelled out each other’s name at the same time.

She is all freckled, with freckled irises too. We sat on the veranda and smoked a rollie. It was her birthday. For an hour or so we went through the missing fifteen years. Her partner, wearing rubber thongs and wielding a rake, set fire to the bracken around the hut while we talked. She and I looked at each other; less teeth, more wrinkles, both still the same.

‘There are a lot of things I don’t remember,’ she said. ‘The last series of grand mals I had, twenty in a week I think, took care of memory. ‘The good news is I can get my driver’s license soon,’ she said. ‘I haven’t had a seizure in five years.’

It always lurches to the uncanny for me in these situations. Thoughts of an absent friend will enter my mind unbidden, repeatedly, and I will know that they are close, somewhere. It’s usually only a matter of days before I encounter them.

I’d been wondering how to find her. I didn’t know her married name. Fifteen years ago she moved to Laverton with her new husband and baby daughter. We’d drifted away from each other in the previous year, through circumstance and social circles. But when she moved away it was in the days before mobile phones, and she ceased contact with me.

This time I made sure she had my number and a few days later she sent me a message with photographs of her children. I replied with pictures of Pearlie, Stormboy and my granddaughter Gracie. She was bringing the kids down to Broke Inlet in a few weeks, she wrote. She couldn’t wait for them to meet her old school mate.

I felt profoundly grateful and warmed by her welcoming me back into her life but also apprehensive because I wasn’t sure why she had stopped talking to me all those years ago. I knew we would have to bring it up at some stage. Mainly though, I was just happy to see her, because being with her felt like we’d never been apart.

I bought some glitter stuff for her daughter. It was hot that day when I returned to the inlet from town and there she was, with her family. She leapt out of the foul wheel drive and danced towards me with her same shoulder shrugging walking dance, swaying her black hair.

Her son, elfin, quiet, ten. Her daughter, awkward, funny, warm, fifteen. They played Scrabble together at the kitchen table, the wood stove home to a lit candle, a scramble of dogs around their feet. She had the makings of a silverside going and her partner lit the fire outside so she could heave the camp stove full of meat and vegetables onto it.

Across the track, Johnboy and his nephew were firing the slope of bracken next to their hut. Johnboy’s mastiffs lay close to the flames licking across the litter, watching their master, their paws nearly touching the ash. Johnboy and the younger man leaned on rakes and watched the fire, or hacked into an outbreak with their tools. The afternoon sun streaked orange through the trees and smoke.
Her daughter had already told me how she loved photography and I urged her to come out and see this beautiful scene of smoke, trees and light. She shyly took some photos and Johnboy just as shyly stepped behind a tree.

‘Let’s go and light up that old wood,’ her mum said to me. There was a pile of rotten, white-anted wood behind her partner’s hut. We chucked in some twigs and a fire lighter. As the flames took hold, both of us reefed over the timber and back into the pile.

‘About your memory … do you mind if I prompt you sometimes?’ I asked. I had some photographs of the old days at my place but I hadn’t brought them. I wasn’t sure what she wanted to leave behind.
‘Oh totally, that’d be great. Remind me, did you have a son?’
‘Yes! He’s nineteen now.’
We talked about other things and then she said, ‘When was the last time I saw you?’
‘I saw you the day your daughter was born. And then I saw you in the main street about two weeks later. She was in a stroller. You had your hair in two plaits. After that, I didn’t see you for a while and then I heard you’d moved away. You just sort of slipped away. I thought I’d done something wrong, or been a crappy friend. I dunno.’
‘Oh no,’ she stoked the fire with a length of two by four. ‘It was nothing like that. My husband isolated me by cutting off my contact with friends. Plus he had other women. He’d been having them the whole time we were together. So I was paranoid too. A double whammy.’ She looked quickly at me. ‘Did you -?’
‘Bloody hell no! I only met him twice, I think. Anyway. No.’

Back in the hut, I said that I had written some books. ‘Ah that’s brilliant Sarah! We always said you were gonna do that, didn’t we!’
Her daughter looked up. I really, really like this kid, I thought. There is something of her mum in her. Those days on the beach at Muttonbird Island.

The next morning, I brought over my books to show my old friend but her daughter snatched them and looked through them intently. She took photographs of the covers with her mobile phone. I couldn’t stay long. I had to go into town, to work.

She came outside with me, and the children stayed at the kitchen table. ‘You know, after you left yesterday, she asked me about aunties and godmothers,’ she said. ‘She doesn’t have any, of course. My family … well you know what the story is. She's never asked me about this before. She said “Mum, do you think Sarah would be my aunty?”’
Broke me in half, this did. I opened the door and her daughter looked up.
‘I’ll be your aunty/godmother,’ I said to her and she just beamed out at me like a torch.

Yesterday I dropped in to see Johnboy who is back at the inlet for a few days. It’s always a tussle getting in his front door, keeping his three dogs inside and Selkie out but we managed. His nephew put on his boots and went to the stove, put the kettle on.
‘Wanna cuppa?’ Asked John.
‘Sure. How are you going?’ I asked. This query invariably draws a negative response, as Johnboy’s shoulder and spine give him constant pain. Yesterday he just shrugged. His three-legged mastiff bitch hopped over to me and I put my hands around her big head.
‘Got some bad news about your mate over the way there.’
‘Oh no! Are they not coming down?’
Johnboy looked at me strangely. His wild hair stood up on end from having just got out of bed. ‘She’s gone.’
I must have been staring. ‘Gone.’
‘They turned off her life support on Friday.’ He picked at his fingers. ‘Cerebral haemorrhage. Tuesday.’
I slumped in the nearest chair, covered my face in my hands. In the cool afternoon, I suddenly felt feverishly hot. I took off my jacket. Johnboy brought me a box of tissues because I must have been sobbing by then, and his nephew brought me a coffee. I chilled, fast, and put my jacket back on.

‘Pig hunters, staying in their hut, her fella's mates, they told me this morning,’ Johnboy said. ‘I thought you were working today. I was gonna come and see you a bit later.’

Another dog wriggled by my side, hoping for a pat. Johnboy and his nephew were telling me about their travesty of a vegetable patch this season, how the potatoes were swamped and the tomatoes were only this high. The pup had been chasing cattle. ‘Have a lolly,’ John pointed to the box of sour worms on the laminex. ‘They’re good.’ Then he talked about breaking the sand bar out at the cut and his nephew talked about the new shockies and springs on his car and occasionally one of them would stop and say ‘Sorry.’

I got up and took the coffee mug to the sink to rinse out. I looked out the meshed window to the hut across the track, where she was to be in five days’ time, with her lovely man and her two children.
Three months ago now. Her, my old friend, standing in that doorway, with her long black hair slung over her shoulder, calling my name.
I had found her again.
And Ruth had found me again.

Let the water come up.
Let the water come up and I will swim around inside my house and out through the open window into a drowned forest, like a seal navigating waving halls of kelp, my eyes oiled against the sea, a single balloon of air escaping my nostrils, searching the briny-filled tree homes of black cockatoos and bees,

The burning season and Bald Island 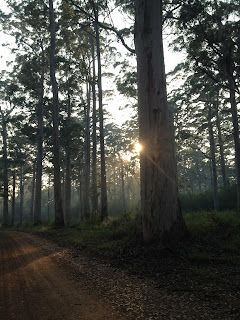 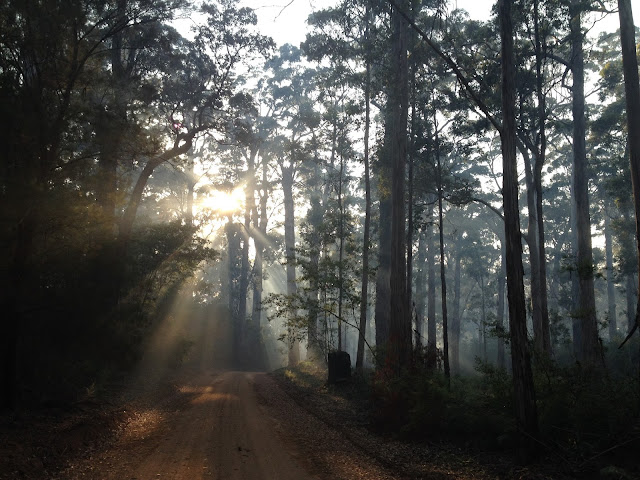 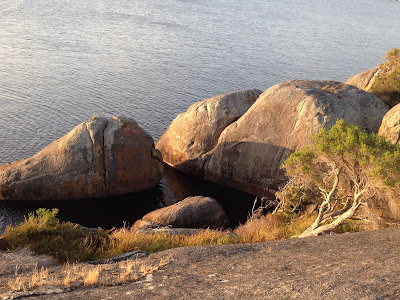 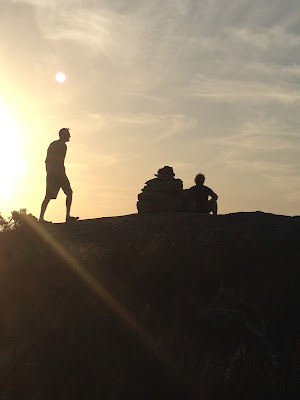 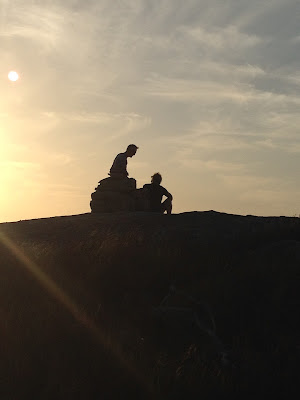 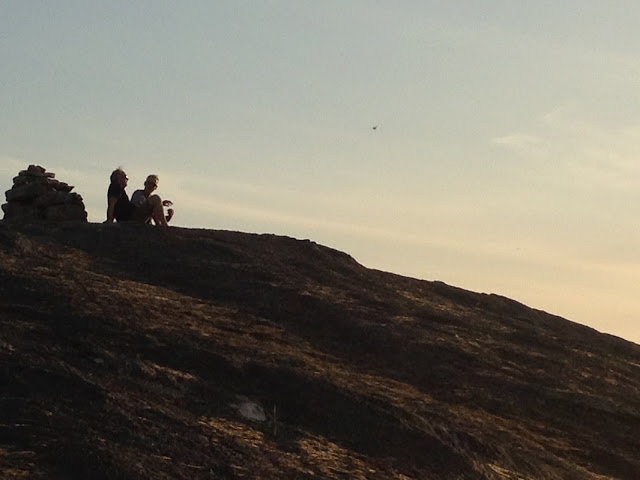 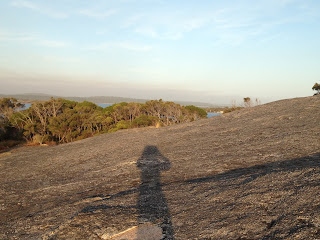