Hydrodamalis gigas, or the last of the Sirens

On Remembrance for Lost Species Day (today) I'll take a look at Steller's sea cow, a sirenian related to the manatee and the dugong. As you can see in this image, they were er, plump and often weighed up to ten ton. They were much larger than their cousins, at between seven and ten metres long. 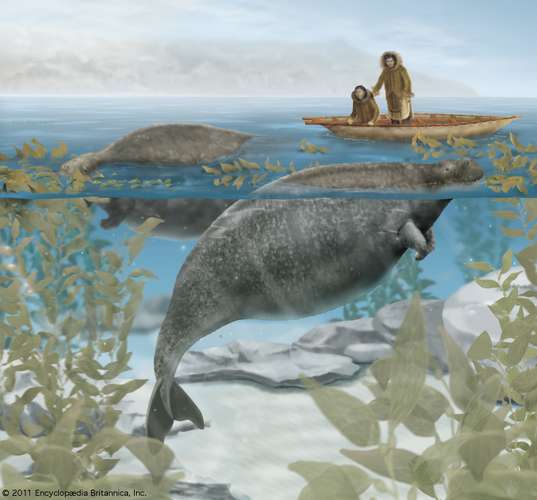 They used to live in the Bering Sea, gentle giants grazing the kelp beds in herds, apparently gregarious in company. 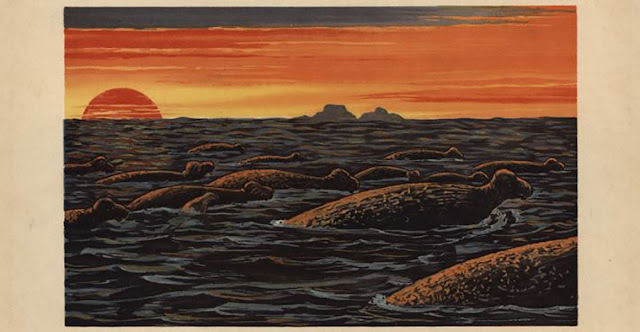 What finally brought the last of the Pleistocene mega-fauna undone, after millennia of Aleut people also hunting them, was the Western world's insatiable penchant for fur hats and coats. No, the sea cows were not furry. But sea otters are and the two species tended to live in the same areas.

"It seems that almost every aspect about these animals contributed to their decline. From their diet of kelp that forced them into shallow water, their social behaviour that put surviving sea cows in further danger, or the thick blubber that not only meant that buoyancy was always an issue but also made them apparently just so delectable."*

As one of the first western scientists to describe the species, German zoologist Georg Willhem steller naturally named sea cow after himself. Steller first saw a sea cow when the starving expedition crew were wrecked on Bering Island. He had the distinction of seeing the mammal both alive and dead and noted that if a cow was harpooned, the bull would follow her and try to ram the boat, copping another harpoon. 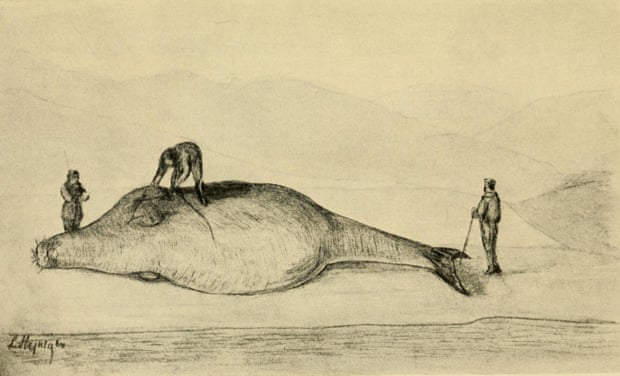 Steller's sea cows became extinct less than thirty years later in 1768. It's possibly an extinction hastened by ignorance as much as greed. The fur hunters seemed to be convinced that a lot more sea cows existed than actually did. The sea cows were in fact a remnant population that were previously unexploited, a lost tribe clustered in the shallows around the uninhabited Commander Islands. As Josh Davis explained in the quote above, Steller's sea cow was doomed from the moment their final refuge was discovered. 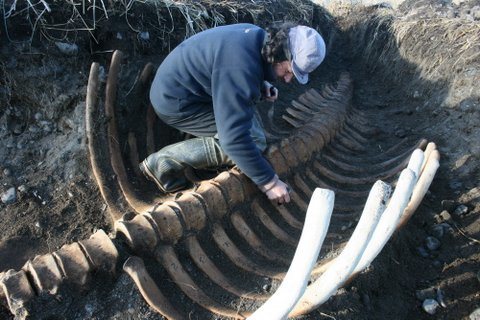 In 2017, archaeologists and scientists with the Commander Islands Nature Reserves unearthed a near-complete skeleton. It's possibly the same sea cow that Steller and his crew butchered in 1742, starving, on the Great Northern Expedition of Vitus Bering. (Who also named a few things things after himself.)

Some things that pleased me this week 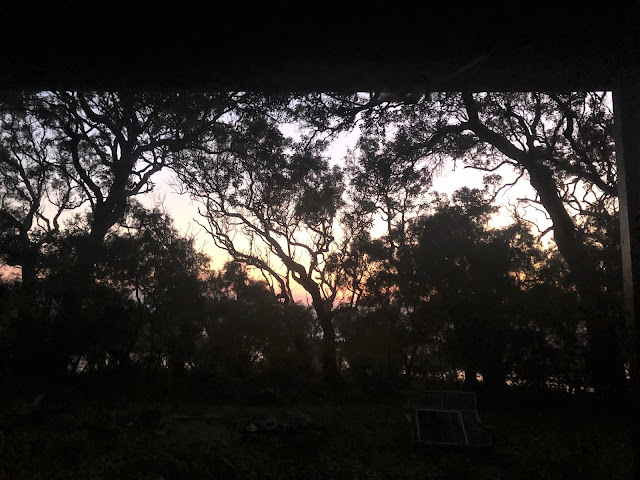 Sunset over the inlet through my (endearingly salt-smeared) bedroom window. 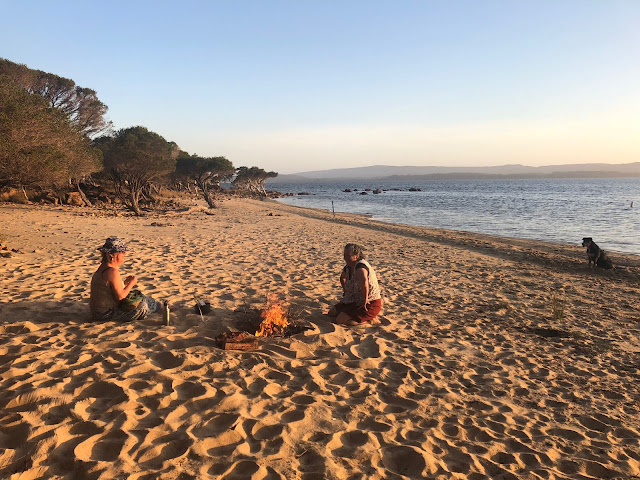 A fire with some friends and the hound. 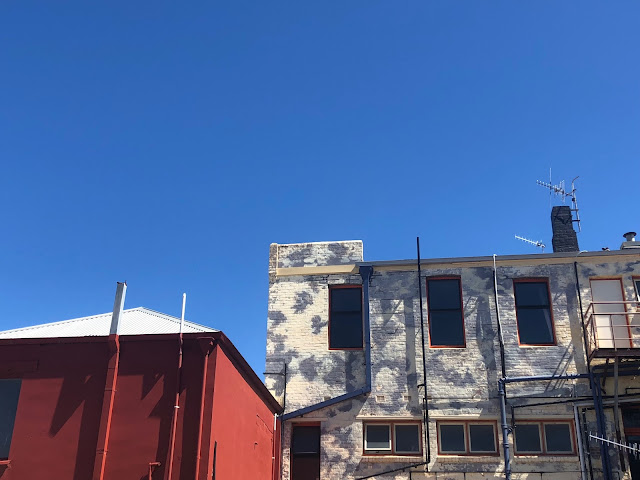 And having lunch in town with another mate on a blue sky day.
Posted by sarah toa at 3:22 PM 4 comments:

An American comes into the shop, tall, tanned and a straw hat over a mess of dreads. ‘What are you reading?’ and I show him Hunter S. Thompson’s Hells Angels.
‘Oh yes, they aren’t what they used to be. Get called Nike Bikies these days. They used to be freedom fighters and activists.’
It’s quiet in the shop and I sit on a stool behind the counter, knitting bones. I’ve been knitting bones for the last fortnight after my unfortunate incident with a cow, and they are finally joining. I can actually feel my bones joining. It’s the oddest thing.

I tell the American about the last days of whaling in my home town and how the local bikies turned up to a Greenpeace protest at the whaling station. The American protestors thought the outlaw motorcycle club had showed to back them up. Things were a bit different in Australia though and they got quite a fright when the potentially unemployed whalemen got off their Harleys and started swinging chains around.

He hovers while I serve a line of disoriented tourists straight off the wildflower tour bus. Lollies, silver spoons and magnets with wildflower emblems, bottled water. (If ever you find me on one of these tour busses in my dotage, please kill me.) Eventually he tires of hanging about and shouts ‘Nice chatting with you. Just don’t beat anyone up, okay?’ One woman nervously hands me a five dollar note.

Trimmer comes in, a tight white shirt framing his septuagenarian nipples. Trimmer’s Nipples is my new band name. Maybe a T-shirt line. Trimmer is an anti-litter activist and a Welshman. ‘How’s your book selling?’ He always asks me this. Concerned face. He thinks I should send my book to Steven Spielberg so he can make a movie out of it. ‘What you have to do,’ he tells me today, ‘is set up at a major tourist destination and sell signed copies. One of the tourists might even be a movie producer!’
‘I have a publicist for that,’ I say, unable to imagine anything more humiliating than setting up at ‘a major tourist destination.’ Trimmer hasn’t read my book. He’s told me that himself.

‘And what are you working on at the moment?’
‘I’m writing about the bikies at the moment.’
His wide eyes open even wider. ‘Ooh!’ And when a stray tour busser comes to the counter, Trimmer says, ‘We have to chat Sarah.’

So Trimmer hovers while the man in a cardigan fishes around for the right coin. As soon as he leaves, Trimmer gives me a look. ‘You know my job of cleaning up the highways, I’ve travelled the equivalent of three times around the world picking up litter around here.’
Trimmer doesn’t need to tell me this. The lead up to the Tidy Towns competition involves Trimmer and the local newspaper campaigning with batshit crazy enthusiasm. People’s characters in this town can become distilled to their very essence. Someone recently compared the place to an episode of The Vicar of Dibley. At the peak is Trimmer, profligate self-promoter and the Taliban of anti-litter.

‘Well I’ve approached the bikies’ northern chapter.’
‘Why?’
‘So they can sponsor my work of course! Now that my funding’s been cut.’
‘Wow.’
‘It will improve their image, they say.’
‘And embarrass the state government,’ I say.

Concerned face. ‘Oh no Sarah. Everyone’s a winner here. Everyone.’ He points to his eyes with V fingers and then to mine. ‘Let’s stay in touch about this matter. We may be able to help each other out.’
I’m not really sure I can help Trimmer out with the story I’m writing but I don’t tell him that. The club, whose last victim has lain in the Rocky Gully cemetery for twenty-five years now, is well overdue for a litter-free spit and polish blast of good publicity. I wish Trimmer the best of luck and send him on his way.

The man with a pained gait and bandaged legs comes into the shop. He bends south for the Tractor Monthly (FREE!), nods to me. And leaves.
Too late, I blow a kiss to the old bloke, as he climbs into his four-wheel drive.

Recently we had a fire training day and one of our lessons was how to survive a burnover. To do the lingo, a burnover happens when you are in a truck, a bulldozer, a car, or on foot as a wild fire front goes over you and through. The boss showed us this video of where a fire fighting scenario had gone wrong. Triggers, folks - anyone with fire trauma need not watch this. However no one was seriously injured here.