Stuff, things, and the universe #2

I thought you may like the latest makings of Paul-the-the-tip-shop-guy's universe. If you haven't come across him before, here is a link to my first foray into his most excellent garden: http://thawinedarksea.blogspot.com.au/2016/02/stuff-things-and-universe.html


The radio is abuzz as the spotters take to the sky. And I'm scanning the misty hills for fire. There are columns of mist this morning rising from the karris like smoke streams. Pemby Spotter radios in the weather and visibility. Two English tourists lie on the granite, recovering from the climb. They don't know it, but they are lying right next to the local dugite's home. 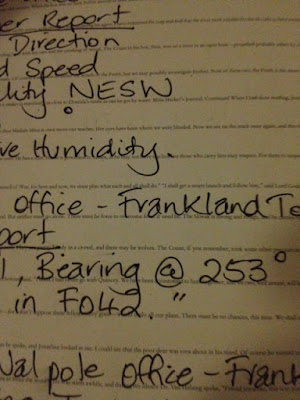 I'm at the top of Mt Frankland on my second day on my own, spotting for fires with binocs. I've become one of the weird little cliques of society that people call 'freaks on peaks', those folk who spend days up a mountain looking for fires in fire country.

It's hazy. The Frankland Spotter is heading over to check fire report in Wellington, I hear. Flying time, 90 minutes. Bunbury, to pick someone up.

It's kinda nerve wracking and boring all at once. It's a bit like being at sea: long periods of boredom followed by brief, intense excitement. Of course I want to spot fires before the pilots do. (Doesn't everyone?) Eagles fly beneath me and I can see the patterns atop their wings.

So ... my radio name is Tower now. How cool is that? I lock up the tower at the end of the day and climb down past ancient karris, jarrahs and tingle trees. The last bit is a sedate walk. That smell of the forest. I watch out for snakes. At the car park, I realise I feel amazing. At the end of a day's work at the service station I am quite fucked. But not today. Today I've been on the best job since I was fishing for a living and this job is pretty freaking good. It's making me feel better.

Break a vase .. and the love that reassembles the fragments is stronger than the love which took its symmetry for granted when it was whole. Dennis Walcott.

This line kept reappearing in my mind as I stood on the sand bar that guards Broke Inlet from the sea. ...  the love that reassembles the fragment is stronger ... His father cut open the grey plastic urn with his pocket knife. 'Let's get this show on the road,' he said. Young men my son's age, raw and stricken, lit up tailormades and hunched into the wind. It didn't seem to matter how they did this thing called grief. Some fell down in the sand crying. Some waded into the sea that had taken their mate, to challenge its power and throw a messaged whiskey bottle into the rip. They spread loose feathers into the waters of the inlet and, with the winds that day, the feathers would arrive on the shores below the shacks where he grew up.

We motored many boats to the bar to spread his ashes. That swell crashed and churned all day, and with it at our backs, we fished for gardies and whiting. We drank beer. We watched his sister throw his ashes into the inlet, standing knee-deep in the water. Her clutching the urn and arcing it over her head again and again. A potential future as powder flying through the air.
'Oh, you go girl,' whispered the woman next to me.

I'd asked him a month earlier if I could go on a pig hunt with him and his mates. Not that I hanker for this kind of entertainment as a rule. It is the culture and experience that I want to write about, in a gonzo kind of way. He probably thought I was an annoying wanker writer for asking to come on a pig hunt, but he did say yes.

When I first met a mob of pig hunters on the Broke track they scared the crap out of me; these jaw-chomping blokes with their ute trays full of lurchers in leather harnesses and brindled killer pitbulls in cages. Straight out of a Mad Max movie that lot, post apocalypse and all. But like commercial fishing, pig hunting is not a visible culture. Muggles only get an occasional look in. You may see at the pub younger, less disciplined dogs spilling off the back of a ute, bristling the GPS wires attached to their collars, and quickly bundled back on board by young men carrying slabs of beer. On New Year's Eve, my sister saw a headless pig hanging from a truck parked at the local supermarket. It's a culture I wanted a closer look at.

Anyway, I met him in the summer at his father's hut. (His dad was the partner of my friend who had died just before Christmas.) He told me a bit about the hunting, about his dogs. He told me how bush ticks fall off a pig as soon as it is killed, much the same way as fleas drop away when a dog dies. There is no place for parasites once the blood stops running, apparently.  I didn't think much about these conversations, just that I was invited along for a pig hunt at some stage. I kept my Broke radar on for when he turned up again. He was a nice lad. I liked him. Then Johnboy rang me.

the love that reassembles the fragment is stronger

Back at the hut after the spreading of his ashes at the bar, some serious drinking set in. Spy, who'd decided he was driving the 100km home to Manji, sat in his Cruiser in a huge sulk, alternately sleeping/trying to co-opt kids, adults and dogs into finding his car keys. His wife sat beside me, pokerfaced. Cam sailed up and down the front steps, vodka in hand, until his every voyage became a party trick. Someone started an argument about mutton. I jingled my pocketful of stolen cigarette lighters. Someone filleted and then cooked up all the salmon, whiting and herring on the fire. The gardies were left forgotten in iceboxes. All the hut folk were there.
Johnboy, his nephew and the drowned boy's dad stayed sober, looking on.

I reckon it would have been close to nine when the women came back. They drove around Spy who was parked in the middle of the track, still sulking. Two of them were leaning out the window shouting, 'We got a pig. We got a pig!' They stopped the car and got out. They stalked around the camp, a bit amped. These women were tall, well over six foot tall with long black hair and they looked like Valkyries. Their lean whiskery wolfhounds jumped out and slumped on the ground beside the car, exhausted.The women had taken a boat in from his wake at the bar and gone pig hunting in the early evening. Not with guns, mind you. They'd gone out hunting, with dogs and knives.

I walked home along the track that night, my headlamp bobbing light ahead of my steps, thinking about those women, his father, the dogs, and this life.

Some art for Good Friday 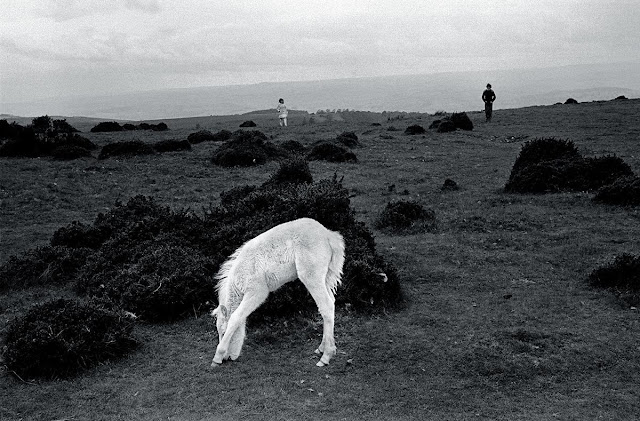 And this I do adore ... At MONA, there is an installation that sprays down jets of water in the shape of letters, lit into diamonds by strategic light. The words are whatever people are typing into search engines around the world at that very moment. The sound of the water and the crystalline words are mesmerising as well as a sense of connection to humanity. This, the day John Clarke died. 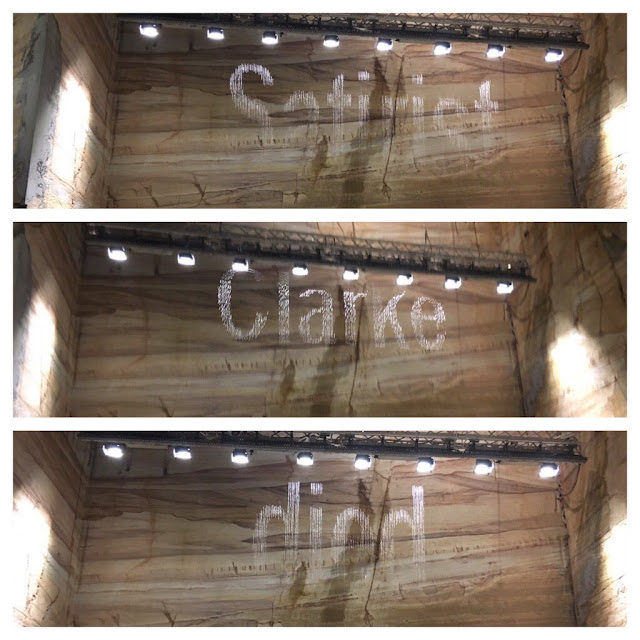 It's been a weird day. You know when you have those weird days?
It's been a thwarted hot date for me, (I do love that word 'thwarted'. It's always reminded me of the thwarts that hold boats together, but also the situation of coitus interruptus.) Today was also a potential argument over money and love with my daughter, saved by our last minute phone call, and finally a woman turned up at the service station yesterday, under duress, looking for baby food. 'We are on the road,' she said, as her partner filled the car with fuel.

She came back again today and hung around, in a shop where baby food, sliced bread and veges are stupidly over-priced. She stayed at the counter, talking to me. She was dithery, moving over bank accounts on her phone to the one she kept kept forgetting her PIN for. 'He's gonna be wondering why I'm spending so much time in this shop,' she said, looking outside. 'He did this yesterday. I don't know him well. He asked if I'd like to come down south as a friend. But he's been getting really strange. I don't know what to do.'
'Do you feel safe?' I asked her.
'No.' she said. 'No. I don't know what to do.'
'Where are you camping tonight?'
'I'm not sure. Maybe Busselton?'

I've been in this situation. I remember forgetting my PIN because I've been so physically and emotionally stressed. I remember asking roadhouse staff for help. At the time they all blank-eyed me.

I gave her my card. I said, 'I'm working late. Here is a contact in the next town. You will go out of range in about fifteen minutes. Please ring and let me know how you travel. X Sarah.'

So, it has been a bit awful, yes. However, here is my fur coat with some kale: 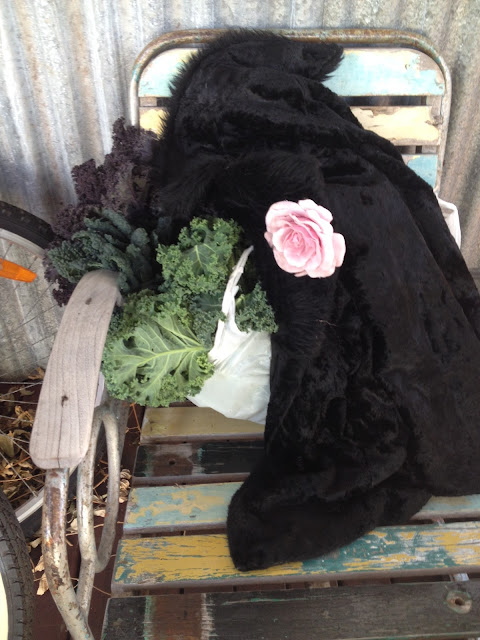 The fur coat was delicious!

Here are some clouds out at the inlet bar yesterday: 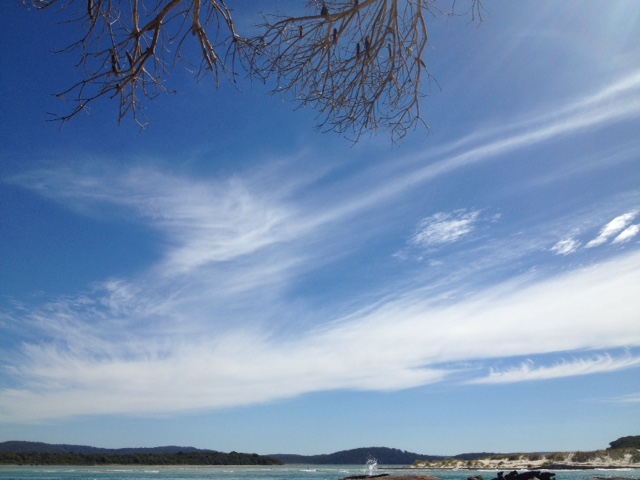 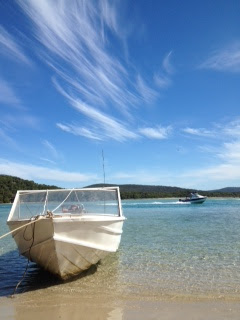 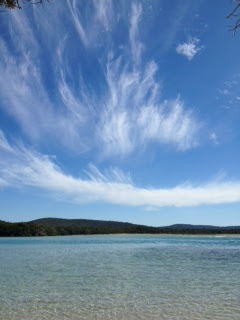 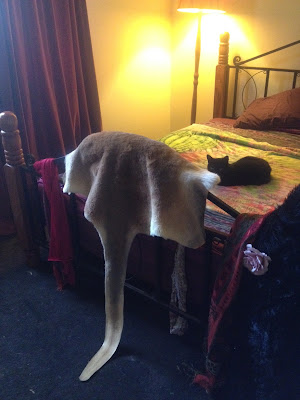 I've been feeling so awful about my life over the last six months or so that I haven't wanted to blog about it. I just didn't want to spray my shit around. Even my high moments at the writers festivals and the etc began to feel like a total writers' tour that sounded so brittle and way too much like social media happiness. Please note here that I have not been feeling the social media happiness. I've been crying drunk and burning my hands every night trying to stuff too-big, shit-burning banksia logs into the fire.*
Best friends were dropping dead from things like liver cancer, hitting trees too fast on their motorbike. You know. The last king hit was an out-of-the-blue early morning stroke while she was walking her dog. Then another one. Grief is a street fighting beast. It just belts the fuck out of you.

I think you can guess which one was the most joyous.

*Banksia wood burns slow and cold. Burn it, if you want to spend a winter crouched over a fire like a desperate, heartbroken beast.