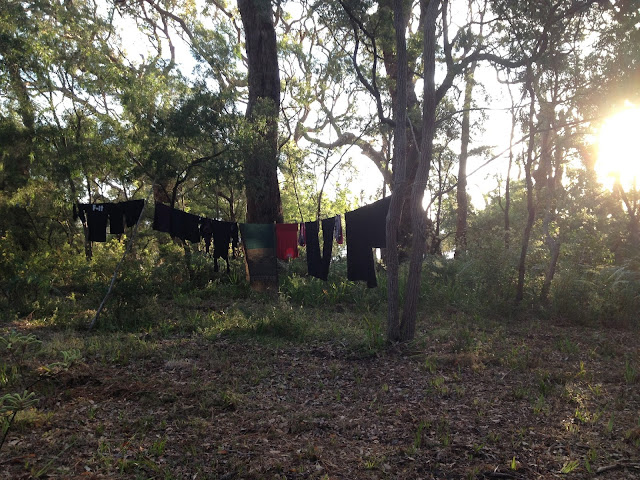 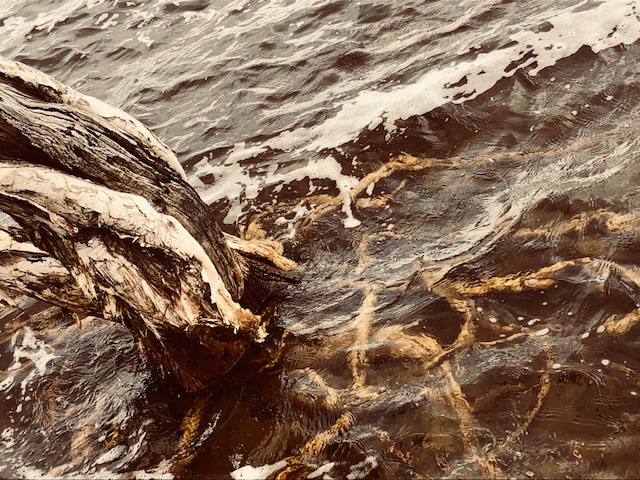 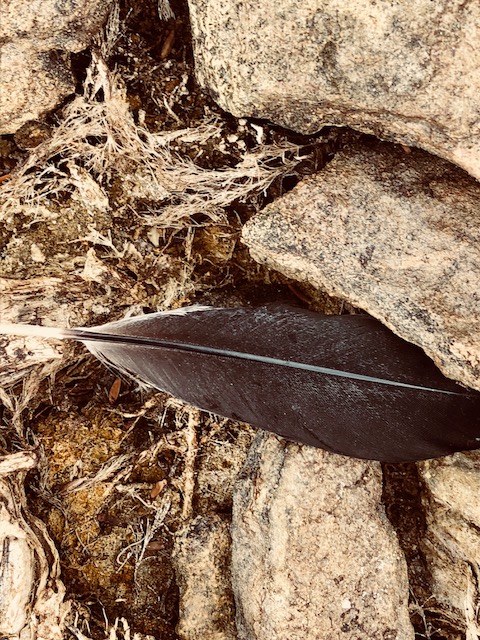 It is a fact universally acknowledged that most international visitors will have seen the movie Wolf Creek as preparation for their Australian odyssey. As I sat there, hoping these Good Samaritans would take me just a little bit further (the track is ten kilometres long) I began to pick up some tension from the front seats that had nothing to do with the state of the track. Where was this dusty, smelly woman with twigs in her hair directing them to? And then what would she do to them?

This was supposed to be a day like any other and by now you will be thinking oh no here we go, but it wasn't like that, just a minor biggie really. I'm driving about 75 kilometres of severely corrugated gravel roads to work at the moment and the poor old car is getting shaken to bits. My mechanic fitted a new radiator on Monday after the last one cracked up.  Drop an egg in it, the inlet hut folk advised, when I mentioned the leaky radiator but I just couldn't bring myself to do it. Their second solution, finely ground black pepper plugged the crack beautifully while waiting for a new one.

It seems that everything has been leaking lately ... politicians, the clutch hose, the radiator, me ... pepper and eggs don't fix everything thing but they sure help with the maintenance. The mechanic told me, while we were angsting over a mysterious clutch hose leak, that he wanted to write a book. He talked to himself and to me while he pilfered another hose from a wreck out the back.

On the new radiator's second day of duty, I passed the grader driver who was smoothing out the Track of Travesty amid plumes of orange dust. I waved out the window and shouted 'I love you Mr Grader Driver!' I doubt he heard me but the sentiment was sincere. 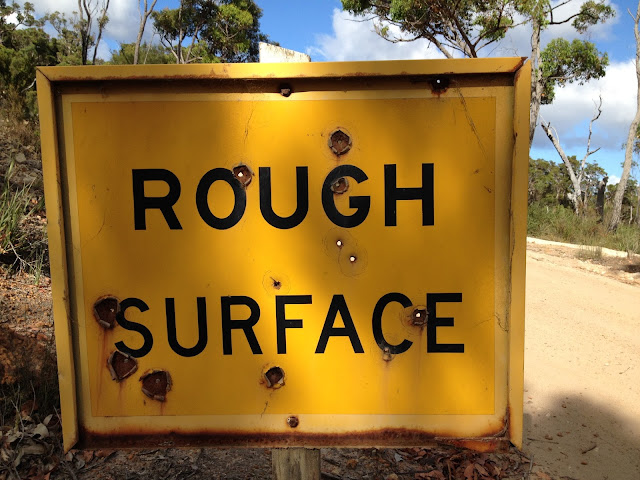 After a day's work up the mountain, I headed home, floating along the new road until I hit the bit where Mr Grader Driver had knocked off for the day, drumming into the corrugations with utter dismay and it was just after this point that the temperature gauge went through the roof.

Yep. Green water pissing all over the stony road as the hot motor clicked. I stood there with the bonnet up, appalled. I still had my little bottle of Saxa ground pepper and, although the busted radiator hose was in a shitty spot, I had the tools and wherewithal to fix it. The problem was that because of my misplaced faith in the new radiator, I had no spare water in the car at all.

The Track of Travesty is a long road. It feels longer if you have to walk it, and there is no mobile phone range for miles around. Longer if it is the first day of your period and you also have a nasty rash. I had to lock the car where it stood on the road, mentally apologising to Mr Grader Driver, and walk away. I walked for a while and despite feeling a bit desolate, appreciated being able to look into the bush to see how it was faring after last year's burn. The emu bushes and bull banksias were coming back a treat.

Eventually some German tourists picked me up. The inside of their car was immaculate, as they were. I tried wiping some dust from my boots but just got it all over me, and sat in the back seat, trying not to smell too much. When we made it to the sealed highway, I explained that I lived at the next inlet. Would it be possible for them to take me part way in?

About a hundred metres into the inlet track, the driver realised the extent of my request. He braked at every corrugation, or tried to drive around them. 'Does it get worse than this?' he asked me, and then 'How much further?'

I could feel their apprehension and I got it. They had no idea where I was taking them. Just that the journey itself would be awful, long before I pulled out my shovel and asked them to dig their own graves. Three kilometres along the track there is a small turn around spot cleared into the forest and it was here that I took pity on the couple. 'I've got some mobile reception! Finally. Excellent. Thank you so much for the lift. You've made my day so much better.'

I rang the mechanic but he'd knocked off. Then I rang my boss to say I might be late up the tower in the morning. Then I walked. And walked. I was okay, apart from being rashy and bleeding. It wasn't dark yet and the day was cool.

On the track, I found:
Two trailer U bolts
A ten cent piece
A washer
A trailer lights converter plug
A kookaburra's tail feather, and then
I saw a black flurry ahead of me and realised it was a litter of feral cats. The kittens scarpered into Tiger Snake Swamp and the mother flattened herself, crouching in the gutter, Her Malevolence watching me walk by with glittering citron eyes.


The birds, the flies buzzing around inside the tower before the wind came up … and then the sudden bomb blast of a giant dead karri crashing to the ground just west of the tower. That sound … BOOMP … is verging on apocalyptic.
‘I know,’ said Al when I mentioned it. ‘It’s worse when you’ve been out mopping up all night. It’s so quiet and then one of those things goes down.’

Smokes everywhere to the west of the tower today. At midday the sea breeze comes in and the south east is hazed over in blue mist. All of the smokes pop up with the wind. Some really get going. Smokes all around me, columns and drifts. I can smell grass trees burning.
Another dead tree, its foundations weakened by the burn, comes whoomping down, plumes of orange dust and smoke rising in its wake.

At the same time, I look south to see a massive plume of smoke rising from farmland about ten kilometres away. Oh wow! Maybe it wasn’t a tree going down. Maybe someone’s machinery shed exploded? Excitement! It’s the first time I’ve had to call in a bravo four three four – dense, billowy, black. Later I find out that it was a tractor on fire. 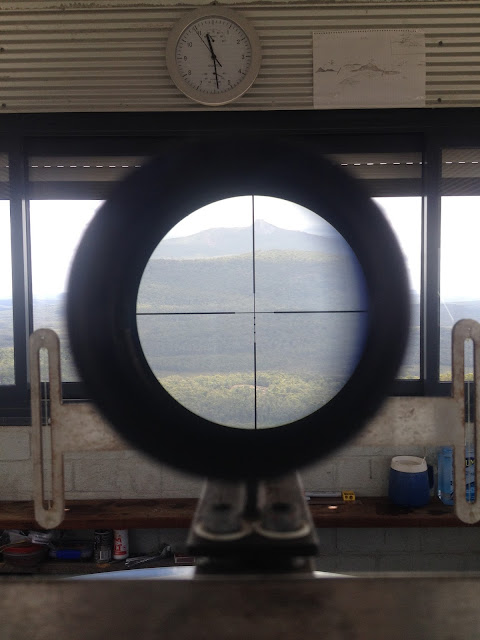 
And sleeping, or not.


Rolling in, rolling away and keeping in touch with any stretch of your flesh.


My hand cupping you, your forearm against my shoulder blade.


Breathing against your gloaming kiss.


My skull, your scapula.


Awake while you twitched and whimpered,


You dreamed like a coursing, rabitting dog this night,


I went over and over the story you told me earlier.


I couldn’t stop thinking about


How you had pressed your thumb against the throat


Until you felt its heart slow and then still.
Posted by sarah toa at 11:10 AM No comments:


Today feels firey and snaky. First day back since the crew put fire in around the mountain, then a few days of rain. Now it’s hot and windy and low humidity. Fire weather. There are smokes all around me from the proscribed burn – bravo one one ones – light, columns and blue. I radio them in as several and give bearings on smokes close to the boundary. 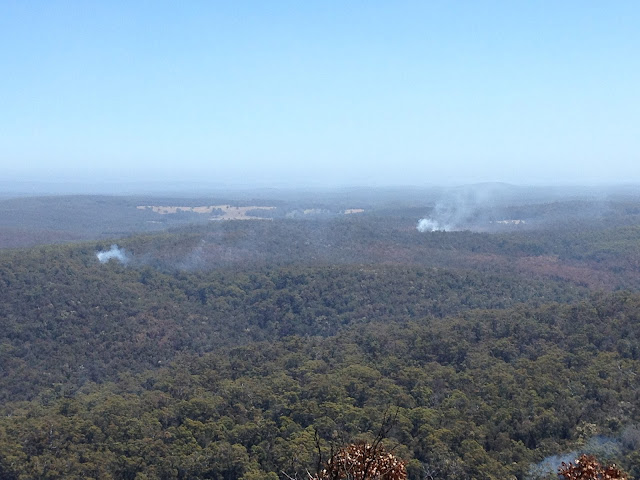 The smokes spire into the sky through the emerald crowns of karri trees. From the tower a colony of sixty-metre-high trees looks like shrubbery but more uniform, as they stand in serried ranks, crown shy of their neighbours. It’s only when I rest my binoculars on a single karri atop Little Caldyanup about five hundred metres to the north, that their enormity becomes real.

So many climbers up here today … tourists, families young and old with their selfie sticks, mobile phones and bottles of water. Their heavy panting announces their arrival at the top of the stairs. Five-year old kids rip up the mountain, leaving their parents to straggle with a lifetime of sins on the concrete stairs.

They are often amazed to see someone in the tower and that the fire tower still operates. Once they have recovered the questions begin. Do you come up here every day? (Yes, when rostered on.) How do you get up here? (Helicopter ha ha. No, the same way you do.) Are you alone? (Ew.) How high are we? (About four twenty metres, so not officially a mountain.) Do you bring your lunch? (Yes.) What are you doing? (Watching for weather and smokes that aren’t where they should be.)

Sometimes I hide when the feeling of being an exhibit becomes too much. Even checking the wind speed on the little kestrel device draws the hushed whisper; maybe she’s a scientist. Then there are the nudist posers. Oh God. It’s a thing. The social media craze that began on Bluff Knoll has migrated to Caldyanup. It’s the only time I’m quite uncomfortable holding a pair of binocs.

A woman just brought up her beagle! I would make a terrible park ranger what with compliance and all, but I just couldn’t let this one slip. I waited while she examined a phone photo taken by a Dutch tourist of a ‘very big, dangerous Australian snake.’
She nodded and said, ‘yep that’s a dugite alright.’ I asked her if she could please take her dog off the mountain and out of the national park, and she was really good! So glad. I patted the dog and asked her how she got it up the two ladders. ‘Oh, she’s an absolute champ,’ she said. ‘She did it all on her own.’
Posted by sarah toa at 9:12 AM 2 comments: