Well, from a grumpy old woman who was going to leave town, I managed to stay right in the beating, bloody heart of Albany's ANZAC commemorations for about four days. There were two ways I managed to achieve this 1) my bicycle and 2) my lovely quiet little blue room at the uni, right next to the main stage. Most of the time I was oblivious to the chaos. I could hear helicopters, loudspeakers, shrieking kids, music, the grunts emanating from the interpretive dance troupe, helicopters, air force flyovers, bagpipes, fog horns, laughter, kids on skateboards, someone playing a violin.

I wrote a lot. Occasionally I'd head out along Stirling Terrace and wonder at this town. At some stage I'd like to mention Peter FitzSimons' red bandana but I'm guessing that because Gallipoli, it's not appropriate to do this right now. (Oh wow. So I right click on the wriggly red line under Gallipoli and spellcheck blogger gives me 'Megalopolis.' Gets better.)

On Friday, my Dad finally retired his working life with a last blast from the cannon he's been nurturing for quite a few years now. It was the opening ceremony. 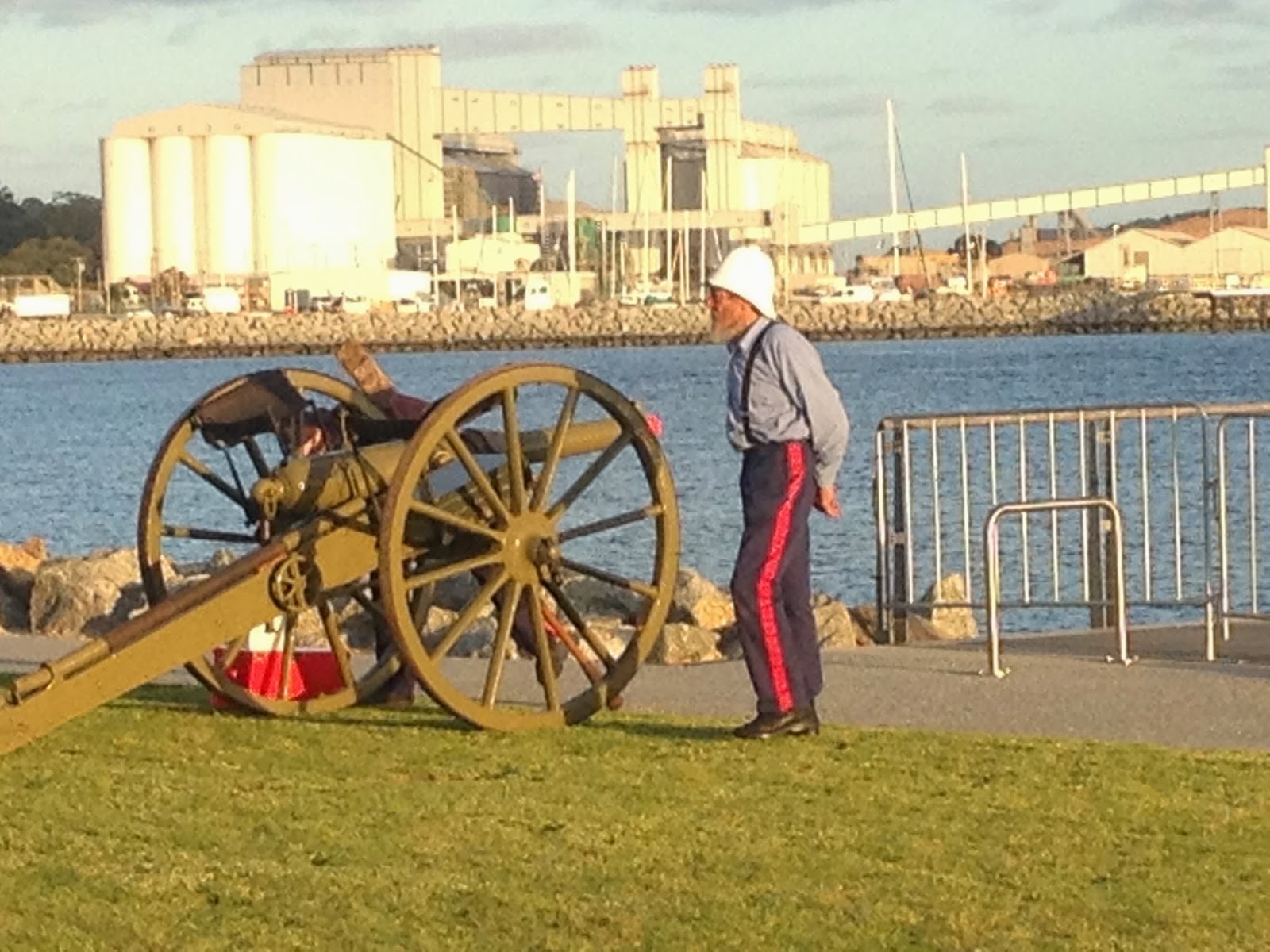 Later he told me he'd been hit in the guts by the cannon's recoil, because the television crews wanted the shot firers to stand to attention directly behind the cannon.
"You did well Dad, to stay on your feet. I never even noticed."

Just before he lit the fuse, I told him that his grandson's other grandfather had died the afternoon before. I felt bad about that later. I knew it was Dad's moment but I also knew that he understood the legacy of war and that his one shot, that one across the harbour with the police boats and barges and television crews, was all about wars.
Dad and I have clashed over war for years. He's a military historian, a gunsmith and a black powder man. I'm an old hippy. We agree about a lot of things : history, literature, politics: but the history, politics and literature of war often divides us.

Anyway ... Stormboy's paternal grandad died on Thursday. Stormboy's Dad rang me not long after he'd found his body. He died in his sleep, he said to me. He'd been eating tinned fruit, SPC fruit salad, put it down, turned over and just bloody died.
My ex-partner was dithery, drunk and quite distressed. He wanted to know how to tell his son.
"You know," I said to him on the phone, "this whole war thing this weekend and your father dying today ... I know he wasn't a soldier. He was a farmer ..."
"Oh yes," he said. "But he was a product of the war alright."

Stormboy's great grandfather fought that WW2 campaign in North Africa for nearly four years and by all accounts he returned a different man; a violent, angry, drinking man. Every family has a story like this one. No one in his family escaped the beatings. When Stormboy's grandfather was fifteen, his father rolled the car, killing himself and several of his children. Stormboy's grandad had to leave school and work to support his Mum and sisters and brothers. It sounded like he hated school anyway. Stormboy's grandad always struck me as a hard little bastard. The first time I met him, soft and in love with his son, he shocked me with his swift, nasty up-and-down and the 'get the fuck out of my shed, woman' look.

I hadn't really thought about all this lately, until the other day. And there is my Dad, firing off his last salvo at the opening ceremony of the ANZAC stuff. The last time I saw Stormboy's grandfather it was a reconciliation, on both our behalves, a knowing each other for who we are as people.

I spent the whole next day under my doona. It was Saturday and all the parades were happening. The warships were maneuvering around the Sound. Prime Ministers gave speeches. Apparently it was amazing. I didn't want to look at anyone. I cried, a lot. There was other stuff going on ... I've found this ANZAC to be an intensely emotional experience.
For me, it's been about men; about watching my son's stoic, quiet response to the news of his grandfather's death and wondering about that. He was so quiet. As a woman, I will wail and fall to the floor, or get too drunk or smoke too many cigarettes, or start a fight.
Don't worry. I'm not pushing him. I know his grief will burst out sooner or later.

Last night I danced with sailors who were shipping out this morning.A local band played Irish music and sailors danced like they were at any club in the world. It was getting lumpy. The bouncers circled after a kid who looked about twelve years old skulled a jug of beer. I could have given birth to any of these kids, I thought, they are just babies. A couple canoodled in the corner. They'd been deployed on different ships for nine months and last night was their only night together.

After the rain, I watched an Illuminart show projected onto the Town Hall and then rode home on my bicycle through moonlit puddles. It's so thrilling riding a bike at night with no lights. I chanced death last night. Yeah. I chanced death. On my bicycle. Hunched over the handlebars and thinking about those baby soldiers who were the same age as my son is today. 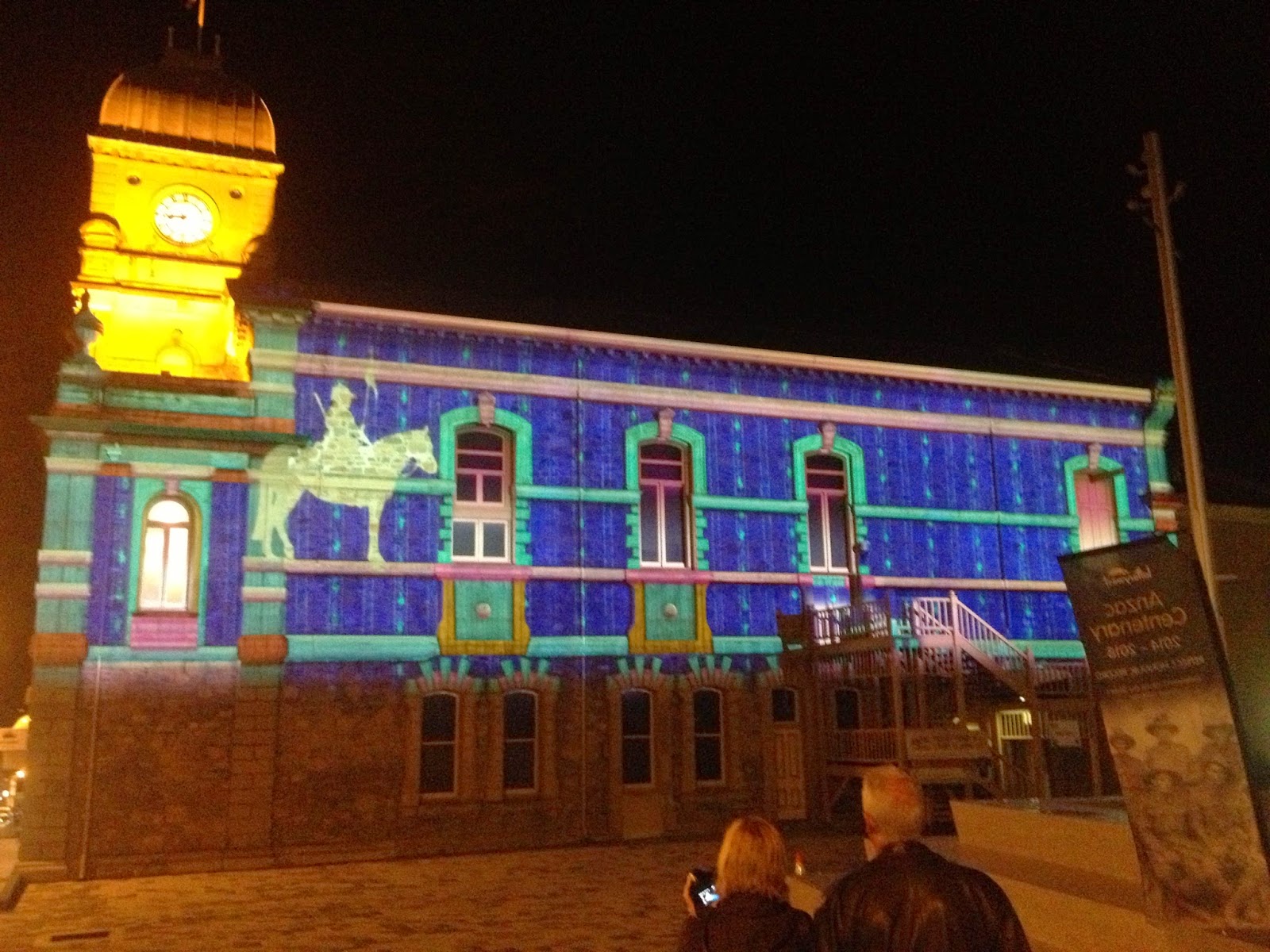