Interview with a pigeon fancier #2

It seems that I am now the proud owner of a book about pigeons. 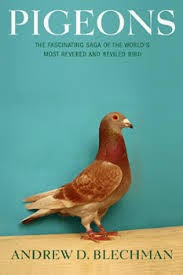 It all started when I found the remains of a racing pigeon, plus the ring that had once encircled its leg, in a gnamma hole at the top of Mount Waychinicup. The ring had a hutch number and that night I googled the owner of this pigeon and entered into the strange world of pigeon fanciers.

Recently a West Australian publisher asked if I'd contribute an essay to their anthology and given that my little pigeon obsession had been incubating nicely in the mean time, I decided to write about the great southern pigeon racing fraternity. So I went to interview the local pigeon bloke, the one who had been raising and racing them for more than seventy years. Random interiews with people can be great in that interviewees can stray into a bigger, better stories. There's a bit of witchery going on there, but also, people have more pressing stories to tell when they know someone is interested enough.

He didn't want to talk much about pigeons. He showed me his birds, loaned me the above-mentioned book and then said, "Now I'd like to tell you about the Kalgoorlie Race Riots of 1934." What he told me was a raw and first person account of what happened in Kal in the 1930s. I recorded it and posted the transcript here.

I rang him about three weeks ago. I begged for a longer loan of the pigeon book because I hadn't finished it yet, and said I'd drop in a copy of my own book Salt Story.
"Well, I've been a bit sick. Just been in hospital," he said on the telephone. "That'll open yer eyes, won't it? Can you leave the book on the back veranda? I don't want to go outside today. It's too cold."
I parked in the driveway and went round the back of his house, past the garden gnomes, potted geraniums and cast iron garden settings and left the book, wrapped in a plastic shopping bag under the clothesline.

A few days later, his name was in the death notices in the local paper.
This kind of passing away, someone whom I'd had a cursory but ... what is the word ... instructive... enlightening? I'm not sure. He wasn't a loved one to me. We never even shared a cup of tea. But he told me about the race riots because he was there as a six year old and he wanted someone to record his story. He said he was the last one alive to witness the event. I'm not sure if he is right about that, but I reckon he'd be close.

He told me of standing at the window with his mum, watching the Italian and Slav women walk out of Kalgoorlie pushing wheelbarrows full of their belongings. Cooking pots, tents, clothes, food. "Their faces were as black as the clothes they wore," he said. "From the soot, you know. [Their houses had just been burned down] That'll open your eyes, ey?"