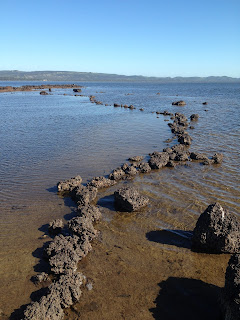 Aren't they beautiful? The stone fish traps revealed after the bar broke at the mouth and all the water rushed out. 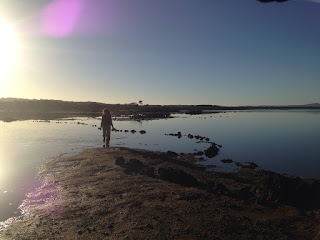 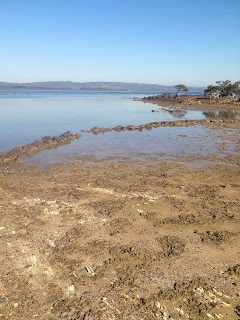 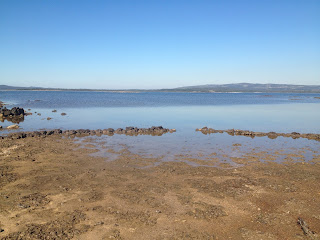 Two nights ago at the inlet, a shotgun or a 308 or something else big boomed into the night. It was early. The sun had just set, I'd lit the fire. Then the cracks of a .22 and the horrible shrieking of an animal, then more gunshots. Selkie slunk under my bed.

This situation freaked me out enough that I took a sleeping tablet that night. I don't do that very often. On my own, and thinking about pig shooters in the capybara swamp near my house was doing my head in. It was too quiet, but for the gunshots and the squealing of dying animals. And I needed the sleep. I thought; 'Stray bullets may miss those who are horizontal.'

I'd promised to drop off some firewood for the Meadow Man who was coming down to stay in his hut. His back is bad and so are his drugs. Nothing is working for him at the moment and so I hoped that a load of firewood would cheer him up somewhat.

He came by yesterday morning, rumbling up the track in his ute, the two brown mastiff bitches stoic on the back tray. I made him a cuppa and asked him about the night's hunting.
'Oh! That was them blokes settin' off fireworks,' he said. 'On the south side of the inlet.'
'But ... what about that noise? That squealing?'
'Well. You know what fireworks sound like. Sometimes, they squeal and shriek.'
Posted by sarah toa at 8:05 PM 4 comments:


Tonight I cleaned the lanterns with precious newspaper that the copper gave me.
I lit one lamp and set the other glasses on the table in front of me. I read the paper by the light and then I tore the newspaper into thin, cleaning strands.
Three pages I kept, and folded them neatly into my breast pocket.

Coulter and Treffene Found Guilty and Sentenced to Death
The Verdict

The cleaning takes an age: careful squeaks on charcoaled glass. Glass waisted and curved like a woman, with fancy, fluted edges. Imagine if I were to break a glass, a lantern that would no longer fire, with the wind as it is here.

I kindle my night fire with the dried leaves of the marris or the tea tree that I keep stacked in tight bundles against the back wall, never a newspaper. Blackboy shards too. That copper rarely gives me a newspaper on his monthly sojourns to the inlet. But he was sure that I was to have this one.

The foreman added the rider: We wish to add your honour,that we very much deplore the fact that Mr Clarke is not in the box too.

So the jury wanted Mr Clarke to swing as well. Mister Clarke. This I learned as I cleaned the lamp glasses tonight. This is what made me pen my letter to you, dear Iris. You may have heard many a story about me over the years but you were just a babe when I left. I want you to know what happened, Iris.
Posted by sarah toa at 1:16 PM 4 comments:

Nic and Jo returned to the inlet to take some more pictures. It is strange to be photographed, be the centre of focus and not feel uncomfortable ... but then Nic was the one who had to take off her shoes and pants to wade out with me and Selkie (who charged about in the water threatening cameras and bodies) - and to have gings aimed at her, to climb in and out of small boats. None of us were precious anyway and all of us were artists, of one sort or another, so it was fun. And cold.
I was blown away by the pictures she took. 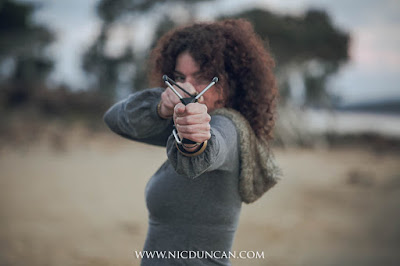 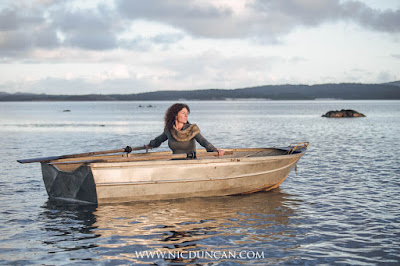 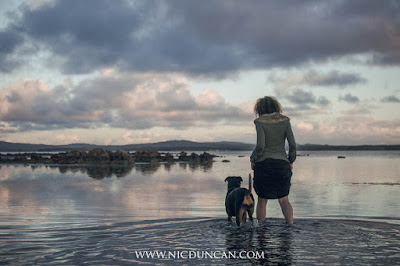 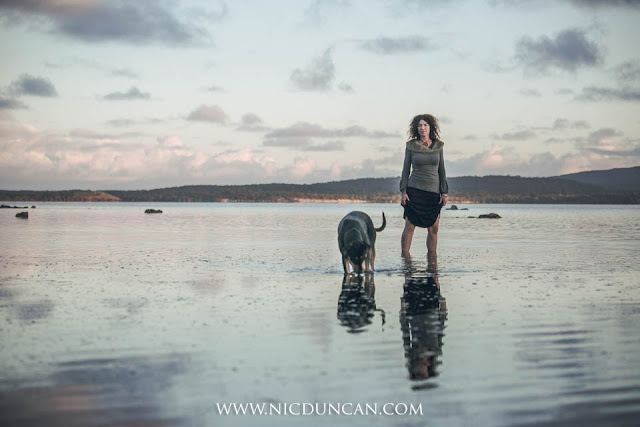 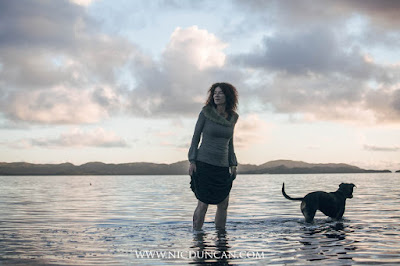 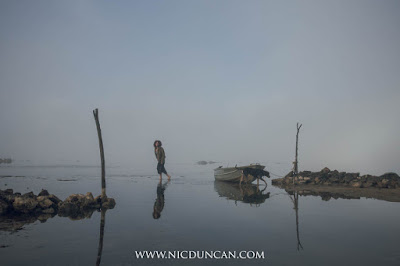 Labels: disaster puppy, indulge me, inlet, thanks mate, The Sound, writing on writers

Voice of the people

In an interestingly ageist vox pop, the local newspaper asked baby boomers whether kids played enough sport these days. Not a soccer mum or dad amongst them, let alone a (gasp) child. Vox populi: voice of the people, heh heh. You'd never guess the response. 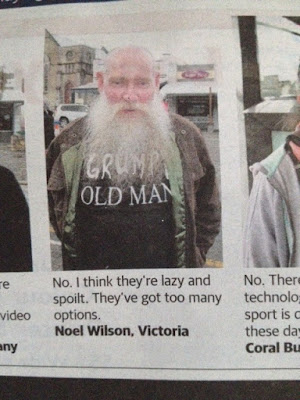 Admittedly Grumpy Old Man may have been playing to the interviewer (though not playing much sport obvs). And I guess it is normal for boomers to be a little disappointed in a whole generation, especially when they are preparing to rent those kids their negatively geared investment properties for an obscene rate, screwing them out of the housing market, and setting them up for an employment future of subcontracting, job insecurity and casual labour. Kids of today, hey?

It's nothing new. Plato also had a great big whinge about the 'kids of today'.
To the people who complain that kids are lazy and don't play enough sport, I would suggest they head down to the aquatic centre at about 6.30 in the morning and watch these swim squad kids churn a hundred or so laps before putting on their uniforms and going to school. Or go to the Saturday footy matches. Mindless condemnation of a whole generation just shits me and, in this case it is quite untrue, and mean.

I think we have an amazing generation of children and young adults. They shake their heads at all our 'adult' public hand wringing about such no-brainers as marriage equality, climate change, environmentalism, feminism and social justice. I'll bet a lot of them want us to get out of their way! No wonder the boomers are scared.