I will tell you. Gunpowder had won that little war in my own home too. Korako was dead, the canoes sawn in half, our houses burned. All a fight over kumara, my mother said, though she knew more. Eight days later a hundred Toa washed onto the beaches from the battle aboard the Sophia, their bodies caught in brothy corners of the harbour, snagged on trees, bloated in that strange manner of men who perished in the sea. Knees bent, legs and arms spread, their trunks plump with water and gases, bullet wounds and gashes marring the perfect black spirals on their warrior hides. We did not fish those tapu waters for a year. It was a thin year.
Since the day the bodies washed up, I have wanted the murderer Kelly’s fingers in a bag about my neck and thought that I would find him working the seas of New Holland. And here I was, helping the white man kill the black man.
Posted by sarah toa at 8:20 PM 7 comments:

On Our Return to Breaksea

On our return to Breaksea, Jimmy the Needle ripped down the osprey’s nest and the skeleton tree it straddled on the highest point of the island, for firewood.

There was a measuring cup and rum, as trade for Magennis and Bailey’s women.

There were the fresh carcasses of four breeding possums that Twertayan had gifted us alive a week ago.

There was spoilt Madeira from a lost cargo.

The sealers were ready for a spree.

Me: Hey Bloggy blog! I'm back! (pat pat) Have you been a good Blog? Have you missed me?
Blog:
Me: O ... Kay. Not impressed. Fair enough. Sorry, but I been busy, Blog. I been hard at it, don't you understand? I brought you some nice little words, just to taste, whaddaya reckon?
Blog: I'll eat some words. Later. When you aren't looking.
Me: That bad?
Blog: I've been so lonely! Bitch Toa. Tie me up and leave me with with diarrhea etherkibble - BRAN and PRESERVATIVES and FOOD COLOURING so it looks like real words and all it does is bind me up. On the end of a chain. All alone. How could you do that? (Forgot. I'm not talking to you.)
Me: I'm so sorry Blog. My mind has been like those reams of copy paper - full of pulp but kinda blank. It's the result of trying to put words in the right order, week after week. There's so many things I wanted to feed you with and walk you though. The flathead are running in the channel. There's a spot, near the reef, just after dark, where we pull them up in the net, heavy it is, they are coming up a foot apart, in the wind tunnel that is the channel. (Anglers take note. You won't get a tip like this in the Newspaper) Old Salt is still acting all salty. We catch trumpeters in Oyster Harbour at dawn for crab bait. He says "It'll be all brass bands and grass skirts tonight", referring to the local Tongan community and their penchant for trumpeters. They've gone for free trumpeters baked in coconut milk in a big way.
Blog: I don't give a shit. I'm bound up. Give me some meat and take me for a walk.
Me: William Hook?
Blog: That bastard. Don't talk to me about William Hook.
Posted by sarah toa at 7:26 PM 1 comment: 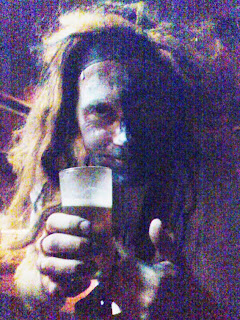 It was like an eclipse - a transcendent experience - if you were an anthropologist. 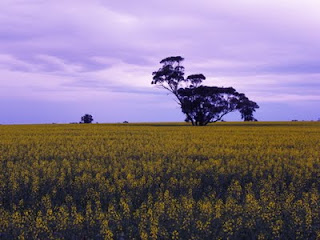 Last week was time for an impromptu journey to Katanning on family business. For those not in the know, Katanning is a wheat and sheep town, way inland, where the only briny in existence rises up from the flat earth and eats whole trees and buildings. The day before, Old Salt had helped me lug two huge iceboxes full of that day's catch onto the back of the ute, so the fish had to come for a drive too.
"Whenever I go inland with fresh fish, I stop at the pub," he told me.
"Will they buy fish?"
"I dunno, never asked!"

So I was driving happily through shocking yellow fields of flowering rape. Someone told me recently that the rape flower is the closest yellow to the yellow in the spectrum of light. It's pretty hard not to feel emotionally moved, stunned even, by that vision of gold, punctuated with dots of emerald trees and a blue sky, when in reality, it is a hard-nosed agriculture with Monsanto at the helm. And, how do you market rape oil to those modern day gatherers, the mothers, wives and other females of the species? Better still, how do you market genetically modified rape oil? It's about as easy as marketing interpretive plaques to Aborigines. There must be a way ... ah yes, rename it Canola.

I stopped at one of those beautiful wheatbelt pubs, looming on the corner of a dying street, a grand old shady lady clad in peeling turquoise paint. Some yellow tape roped off the groaning veranda. "Do not cross. Party scene." I went into the bar. It was ten in the morning and the balloons were up, the pool table covered in a white sheet, Sky blaring. I forgot. It's Grand Final Day. The bar was packed.
"I was wondering," I asked the quintessential barmaid, "if the cook wants to buy some fresh King George Whiting fillets?" The bar went silent (except for Sky) and they all turned to stare at me. I felt like backing up, with my hands in front of my face - or perhaps going on the offensive - "I'm licenced to fish and insured to sell!" - whilst waving around a Pike.

She explained to me, gently, that the frozen fish van comes once a week to deliver them Basa, so thanks but no thanks. I drove on to the next town, to another pub much the same. A man was on the footpath at the front, doing something strange with one of those blower thingies. He was blowing dust out of its bag and into an icecream container, except that it was going everywhere and coating the walls. I didn't get it but I got out and asked him about the fish anyway.
He looked at me, as if I was the strange one, like I was from the moon, or maybe even a curly-headed hippy from the coast, trying to flog some fish. Something like that. It didn't go well. "Nah, I fink we're right, love," he told me, folding the words around his beard and two or three teeth.

After that, I gave up selling fish and concentrated on the more gratifying business of family affairs. On my way out of Katanning a few hours later though, I stopped in at a great little antique shop on the highway. The proprietor stood out in the sun, polishing something brass, with a little radio beside her broadcasting the footy. Whilst chatting, my attention was drawn to the bicycle beside her. Ooooh, a bicycle. And what a darling. A proper Australia Post posties bicycle straight from the 1970's. Back brakes! Red and white! 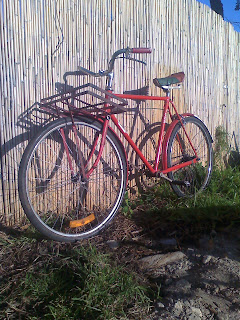 It turned out she just loved King George Whiting. She could do me a deal for a kilo of fillets.
Posted by sarah toa at 3:36 PM 8 comments: