At cafes and bookshops around Albany ... 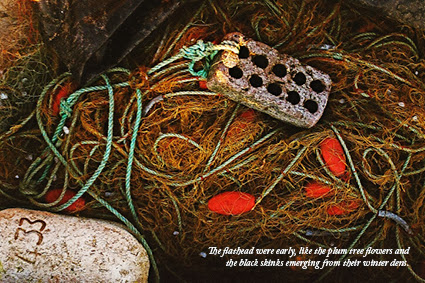 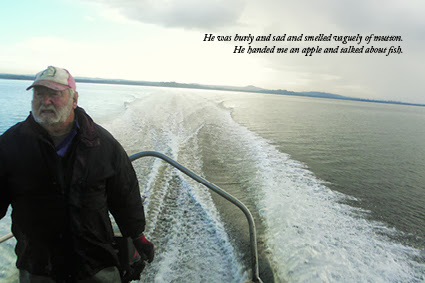 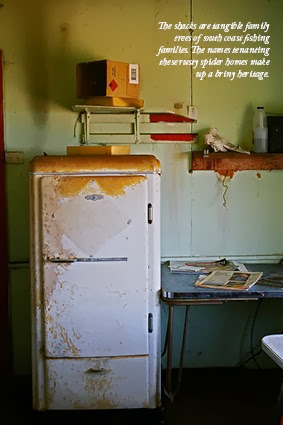 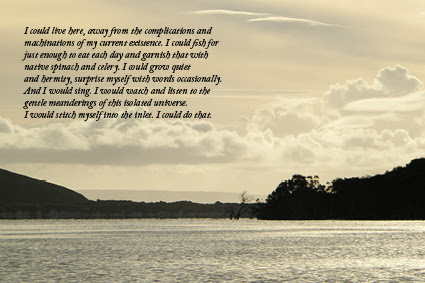 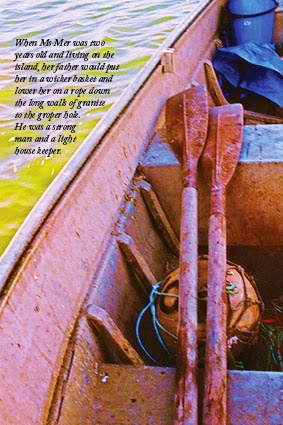 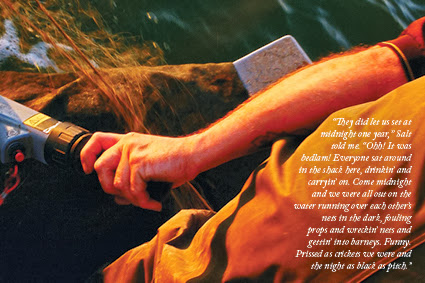 Empire remnants and the trumpet

Nigeria's NNS Thunder left Albany today. As the wind turned and they chugged through the gloom of a rainy Sound, I heard the strains of a brass band playing on deck.
Beautiful. 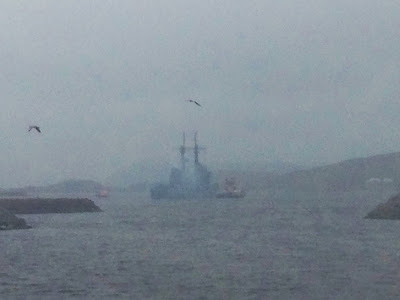 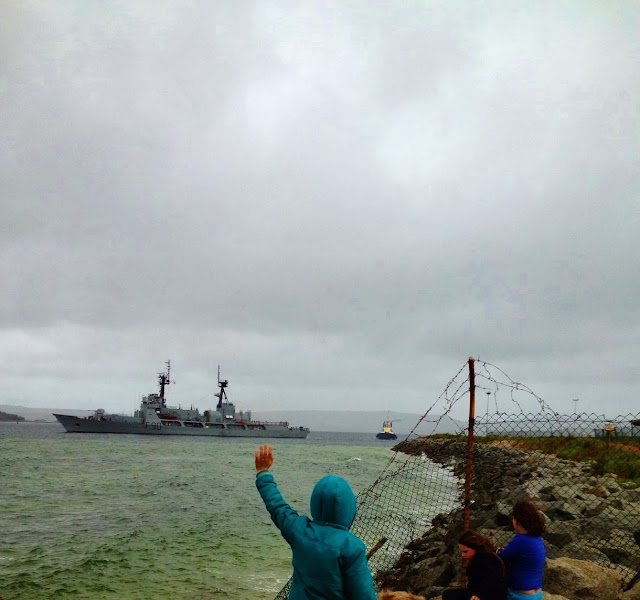 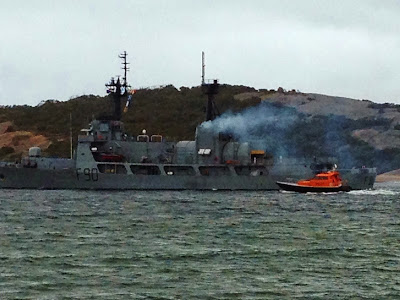 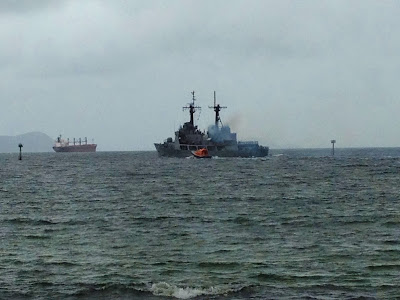 A WineDark Sea and Salt Story

Okay, so I was shocked into a kind of euphoric, ditzy stupor yesterday when I discovered my book on the shelves a week before I expected them. Goodness! That was a moment. But I should probably now compose something more thoughtful, respectable and writerly than Wilbur Fucking Smith.

The last few weeks have been mad and there must be something in the water because everyone else around me seems to be infected too. It's got something to do with schedules, deadlines and all the planets converging on a meteoric November. Me? Oh, the thesis is due in by the end of the month and there is this small matter of a book launch: 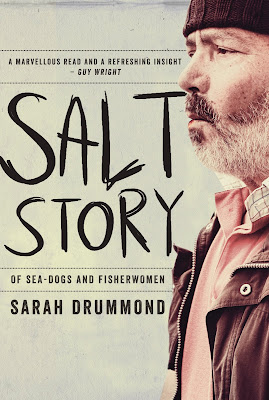 For anyone who would like to make it to the deep south Salt Story book launch and hasn't received an email or proper hard copy invite from me, here are the details. It will be held at the Boat Shed on Princess Royal Drive at 5.30 pm on the 14th of November. As it is beginning to look like a rather big party, you must RSVP to the Albany Library on 98 419390. There be lots of wine and food. There may be dancing girls. If not, then Fisheries officers - in uniform.

The library staff have been awesome. The manager Paul will be MCing and Julia will read some pieces from Salt Story with me. In fact heaps of people and organisations have really stepped up for this book. Paperbark Books have worked hard and happily to create a weather system around Salt Story. They stacked my books beside Wilbur Smith in the window of their shop, among other touches of creative genius. The Albany Maritime Foundation have given me the Boat Shed on the sea shore for the launch. One of my mates is playing guitar, another is performing the Welcome to Country.

Anyway, back to the madness, I had a coffee with my friend J yesterday, after he'd walked down the street to deliver the master copy of his double CD to get pressed. The process of recording and producing his CD has been exciting, convoluted and slightly eccentric in its execution, true to the character of its creator. He is having his launch party the day after mine.

"I can't possibly go back to the office and answer emails yet," he said on the phone. "Come and have a coffee with me." So we jumped in his car. He put his brand new CD in the player, cranked it up and drove around the mountain on the marine drive where freighter ships loitered in the Sound and the wind blew white stripes across the water.

"People keep saying 'you must be so excited'," he shouted over some most excellent riffs by our mutual friend Irish. "But I'm not. I don't know what I feel. Kind of horrified? A bit manic? What have I forgotten? I know I've missed something. It's going to be huge. I don't know if it's any good ..."

On and on he went, his thoughts mirroring my own feelings over the last two weeks. "You must be so excited." I'm too spun out to be excited. I don't know what I feel. I do know that seeing that stack of books yesterday was one of the coolest things to happen for me, probably since my grand daughter was born.

I've been thinking about A WineDark Sea and internet publicity a bit lately. I set up the website of fishing images that you can see on my sidebar. I've managed to stay away from facebook but joined Goodreads and started a twitter account - something Tom Stephenson predicted I'd do when I became a published author. Tom you also predicted that I would reduce my blogging to 140 characters at about this point and turn into a publicity idiot if I remember rightly :~), but you know, twitter doesn't really work for me. I still don't understand its usefulness. Well I do, but it just does not interest me. I want to stay here, here on A WineDark Sea. I know it is a go-to destination and not exactly clickbait heaven but it's my place and I like it here.

And now for a completely gratuitous image of Wilbur Fucking Smith my beautiful, beautiful stack. 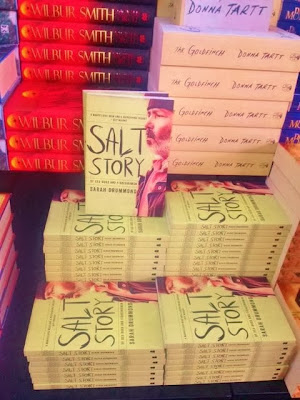 And another ... of my dog, who is immortalised in the book but alas no longer on this mortal coil. 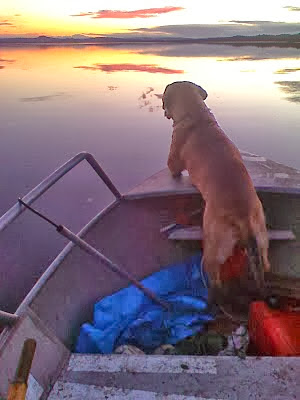 This is what happened to me today: 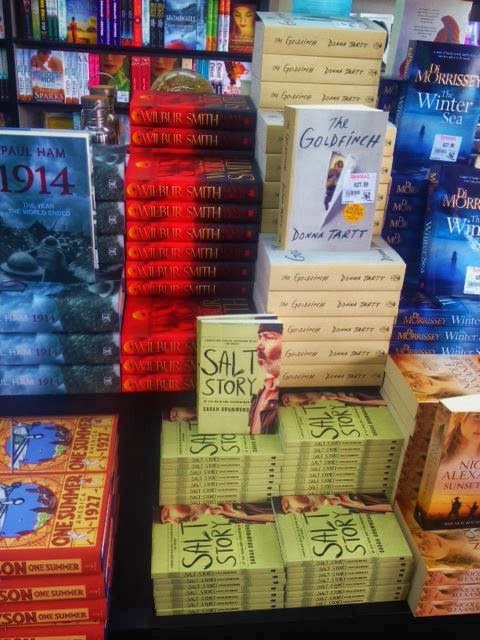 I was going about my own business when I got a text message: hey Sarah. Paperbark said they have it in.
I was at the library so I bolted across the road to the best book shop in town and sure enough ... there was my book, stacked in tidy heaps by the window.
I stalked down to the bowels of the bookshop. The owner looked up from his desk and said,
"so here is trouble."
"Come and have a look at this!" I said, " Someone has put all my books in the window." 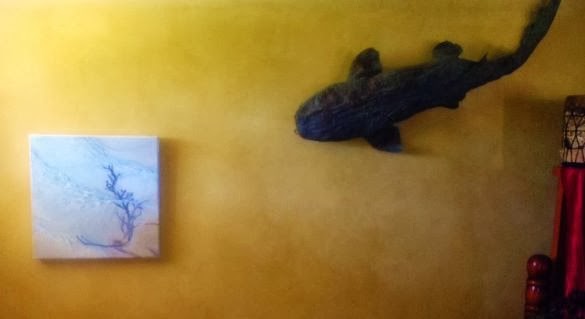 They gifted me WeedChild
because they knew I loved her.
So I took her home and hung her
in the sunshiny, beachsandy shallows,
in the flight path of a wobbygong shark
stuffed with mattress foam.

Because this is what you do
with the paintings you love.
Yes?
Posted by sarah toa at 11:08 PM 7 comments:

I came out of my house at exactly the right moment to see the cow gallop down the driveway, through the open gates and onto the road. She looked right and left, then headed for the neighbours. They are quiet sorts. The last time I saw the wife, I was returning from a run and gasping for breath while she towed out her wheelie bin on her all-terrain bike thingy. She gave me a wry nod, acknowledging that she'd just used a machine to tow her rubbish bin less than fifty yards. Not a smile or a wave, just a nod. She's a hairdresser.

Anyway, the cow decided she was going to visit these folk because she was on a freedom flight and probably on heat and no electric fence was going to stop her beeline to the bull waiting in the next property over. By the time I'd jogged along the neighbour's drive (shutting the gate behind me just in case) the errant bovine had been locked into a yard by an old bloke staying in a chalet there.

"Go and see Gazza," he said. "He's moving out some horses though. You know how these racehorses can be princesses? You'll need to warn him if Dave the Farmer is coming to pick up his cow. Go up there," he pointed along the drive, past the house, to the sheds. "Head towards that big shed and you'll find him."
"What's his name again?"
"Gazza."

I walked past the manicured lawns and gardens to the business end of the property. The place had changed since I was a kid. Back then an old man called Gargie used to shoot the crows on his pumpkin patch. We regularly cracked our teeth on Mum's pumpkin soup or pressure-cooked pumpkin laced with shot. His house and a most excellent mulberry tree have been cleared and replaced with copper-logged horse yards and a corral with a spinning chaff mill that reminded me strangely of Conan the Barbarian, today.

As I neared the shed, I heard the cling clank of metal tools hitting concrete, and then a soft tap tap tap.
"Hello?"
I looked in. A man was shoeing a horse, his body bent over the horse's hind hoof. The horse threw up its head at my voice and kicked against the farrier's hold.
"Be with you in a minute," he said in a low voice and I backed out.

He came outside fifteen minutes later. He was a lean, hard man and annoyed at the interruption.
"Hi, I'm Sarah," I said, because over the years we've never had the opportunity to meet beyond a nod. "Dave the Farmer's cow just got out of our paddock and she's shut in one of your yards now. Thought I'd let you know. He'll be here soon to get her."
Droplets of sweat, yellow with dirt, dripped from the end of his nose. He was like a statue, he was so still and carved. As soon as I mentioned the farmer's name his jaw hardened.
"I don't want that cow in my yard," he said.
"I know. I heard you were moving some horses out."
He nodded. He was one of those men whose face and body barely concealed their restrained anger.
"I'll give you ten minutes and then I'll let her out and push her onto the road," he said.
"Oh."
"That's what he'd do. He's a shit neighbour. Done it to my horses, let them out on the road, he has."
"Oh. Okay. Look, she's not my cow, she just stays here."
"He's got cows all around here. He uses everyone up. Get her out in ten minutes or she's on the road. I'd prefer to drive out the cow, than have that man on my property."

Monologue of a commercial fisherman 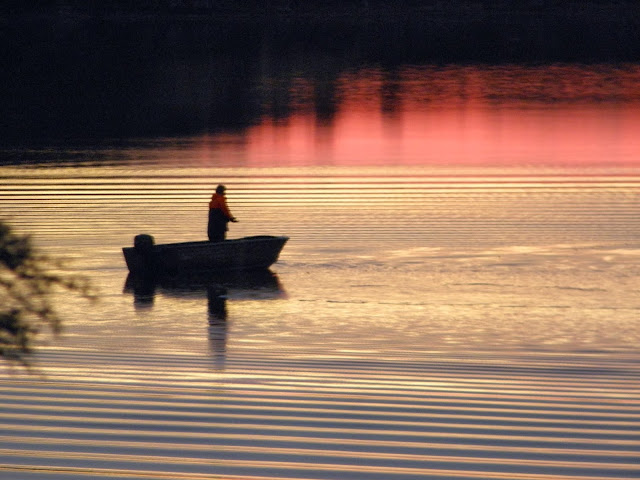 If you work a body of water and a body of woman
you can take fish out of one and children out of the other
for the two kinds of survival. The fishing is good,
both kinds are adequate in pleasures and yield,
but the hard work and the miseries are killing;
it is a good life if life is good. If not, not.
You are out in the world and in the world,
having it both ways: it is sportive and prevenient living
combined, although you have to think about the weathers
and the hard work and the miseries are what I said.
It runs on like water, quickly, under the boat,
then slowly like the sand dunes under the house.
You survive by yourself by the one fish for a while
and then by the other afterward when you run out.
You run out a hooky life baited with good times,
and whether the catch is caught or not is a question
for those who go fishing for men or among them for things.
Alan Dugan, “Monologue of a Commercial Fisherman” from Poems Seven: New and Complete Poetry, New York, 2000. 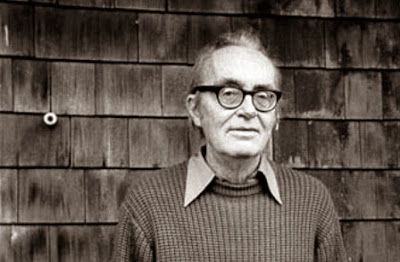