Pushing out the boat 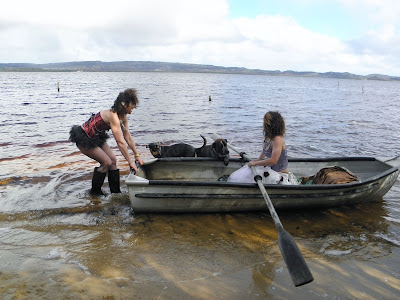 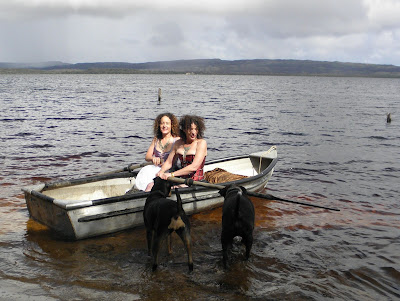 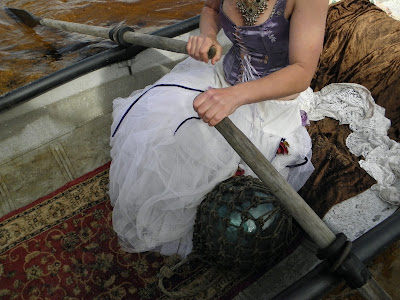 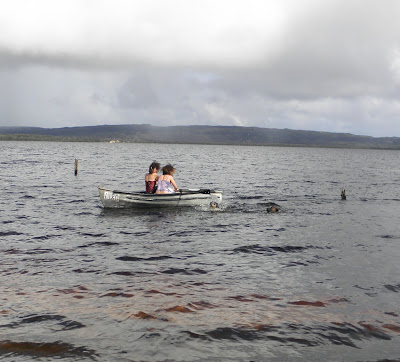 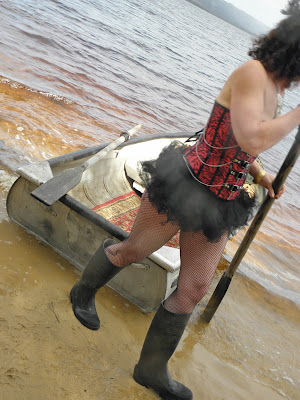 
The capybaras are still on my mind but I think in this post I’ll mention them only in the context of pigs. Because capybaras are just enormous guinea pigs, right? So it’s a leap but I’m going to write about pigs, or more specifically, my meeting with the kind of folk who like shooting them.

Along the Broke track, through the karris and spear trees, I came across two four wheel drive utes. I was heading into town for supplies and pulled over because it was a section of road where only one car could pass.

The first driver wound down his window, so I wound down mine.
He was skin-headed and scarred about his face from some recent misdemeanour.
A younger passenger in a hoodie and sunnies smiled at me.
The single cab ute was backed with a tray full of dogs. Half of the tray was open and three lurchers, lanky hounds wearing leather chest harnesses and feathering hairs about their snouts started up a racket when they saw my pup. The back half of the tray was a cage, filled with more serious-looking dogs.

He looked a bit pinned as he kept talking. His mate with the sunnies just smiled at me. I said I’d be back and drove off, waving to the next ute-load of men and dogs, laughing to myself. I thought folk like that were extinct down south. I thought we were all so bloody civilised in these heady, literary days of coastal town gentrification. The last time I came across men and dogs like that was on the outer fringes of Darwin in the 1980s. It’s story time, darl, I told myself as I drove into town. For a writer that encounter was good hard copy delivered straight to the brain. How excellent.

The thing is, that as I was driving home again my mind became beset with the most awful Deliverance scenarios. (“It’s awful quiet out here.”)

What if they were waiting at my house when I got home?
It started raining pretty hard and I turned on the windscreen wipers and headlights.
Maybe they had found my house in the bush? How was I going to boot them out? How many dogs did they have again?

I drove the ten kilometres of bush tracks to my new house, doing my own head in the whole time, and of course they weren’t there. Sorry to let you down. They’d gone up the Shannon like they’d said they would.
But I locked the gate anyway. I kept it locked all weekend because … because … I didn’t want two ute-loads of pig shooters and their dogs driving into my place. I stowed an axe under my bed as well.

I’m learning all the time here. I’m developing half decent lies to queries from sketchy strangers who I’ve met so far at my new home.
“Hi! So where is your husband?”
“He’s out the back having a shit/ having a shower/ fixing that dodgey fence.”

“Gidday love! Seen any pigs?”
“Yes!” (Points away from the house) “About thirty kilometres west from here along the Chesapeake Road. I saw mobs of them, just yesterday.”


“Did you just get that net in?” asked Sister.
“Um …”
“Get any fish?”
Which made me just choke with laughter.

I am trying to work out how to insert capybaras into this yarn because they’ve been on my mind a bit lately but I'm not sure if I could get away with it. I don’t know if they are necessary anyway.

This morning was dark and stormy and I woke at first light to rain hammering the tin roof and remembering that I’d left a net in the inlet overnight. My sister and I had piled into the boat after dark. The dogs jumped in and we rowed about twenty metres from the shore. I stood and threw the first buoy over and then the brick to anchor it. We set the net and rowed (wobbling with excitable dogs) back to shore and walked up to the house to make some dinner. One thing led to another and the net stayed in the water.

The shore was sprayed with foam and flotsam and an onshore howler. The boat was tied to a paperbark and swamped by waves coming over the stern. I spotted the buoy. It looked pretty close. I had waders on and a gaff hook in my hand. Bugger bailing out a boat. I could walk out to that buoy. I am waterproof to my bosom in those things but then the waves started chipping at my boobs and the buoy was just out of reach. The dogs sat on the shore and watched me wade back in and bail out the boat.

They looked more interested when I got in and adjusted the oars. “You’re not coming,” I told them. I used an oar to push out the boat. Well, it sounds good doesn’t it? Push out the boat. All I did was push the boat sideways and the wind and waves did the rest. I stood up again for another crack at it and managed to get the boat just past the first submerged tree, where the oars snagged and the wind jammed us against the trunk. I climbed out of the boat, thinking I could walk it out a bit further but it’s actually quite dangerous being on the lee side of a boat in heavy winds, which is somehow where I ended up. With a tree on the other side.

I dragged branches out of my hair and walked the boat back in. That was the easy bit. There was nothing for it now but to get wet. I walked back out towards the buoy, gasping as the first wave filled my waders. I really wasn’t thinking this one out too well. I’d heard terrible stories about flooded waders but nothing terrible happened and the buoy was so close. It was right there. I reached out the gaff as the water lapped at my shoulders and snap! Got it. Wicked. Things were improving here. I tugged on the buoy and it felt snagged. A harder tug and it freed up and floated towards me … without the net attached. The dogs sat on the shore and watched me wade back in with a buoy and a busted rope.

Now I learned a few things this morning. One thing is to never tie the flappy ends of your wader braces across your chest. Standing on shore with waders filled with inlet was quite uncomfortable so I unclasped the braces. The water weighted waders sank down and the tied-off flappy ends immediately started throttling me.

Once I’d saved myself from a garrotting, I couldn’t get out of the waders. It took a while, the dogs lapping at the water spilling from green plastic. I looked out to the second buoy. Alright then. I went back in. I was doing a crabby kind of sidestroke with the net box and the gaff, when I thought that I probably should have taken my socks and jumper off. The thought that I may lose a sock annoyed me. I only have two pairs of socks.

The second buoy is a beautiful old glass buoy bound in orange rope that my dad gave to me. As I swam towards it, I let go off the net box and it blew straight into shore. It was easier to get out to the buoy after that. I snagged it with the gaff and tried to pull it towards me.

Another learned thing this morning: you can’t actually haul a net while swimming. Who woulda thunk it? It took about ten minutes of swimming as hard as I could to get the buoy to a spot where it was shallow enough for my feet to find purchase. Then I started pulling, dragging the net over the rocks until it was properly snagged. Like, really snagged. I yanked a bit harder and the glass buoy came loose and floated towards me. I flailed the gaff through the black water, trying to get the net but no joy. The capybaras dogs sat on shore and watched me wade back in with a buoy and a busted rope. Their feet weren’t even wet. I would smiled indulgently at them but I was so cold I couldn’t move my face.

That net is a ghost net. I mean it’s not now. It will be easily retrieved with a grapple iron once the wind settles. But it came into my possession as an abandoned net that I found up at the bar at Pallinup, full of rotten yellow-eyed mullet, and I'm adamant it will not end up the same again.

All up I'd been in the water for about half an hour. It started raining. I stumped up to the house in my soaked socks and clothes to have one of the longer hot showers I've had.

Yes I've counted them. It's fifty steps in my sheepskin boots from my new front veranda 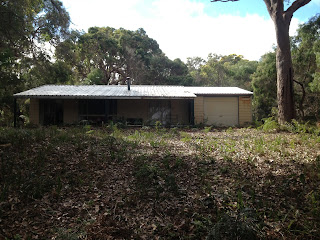 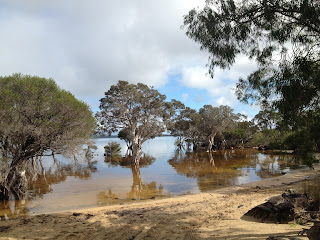 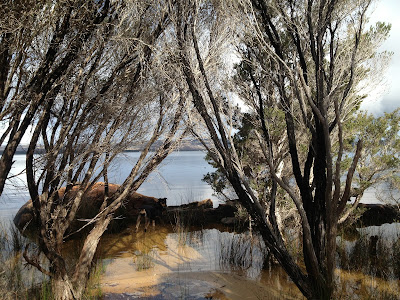 I did think I was a bit nuts, about the moment I strapped my mattress on the back of the ute. The months of planning the housing, the novel, the logistics, the gas bottles and batteries for LED lights and lamp oil, all that came crashing in when I finally realised the reality of moving to one of the most isolated places in south west Australia to live in a house without debilmagic, smart phone range or community back up.
"Jesus, what the fuck am I doing?" I texted a friend.

The thing is, I know I'm the same woman who built a shack in a ghost town four years ago. It's an edifying affirmation for me right now.

'It's okay, you can do this, Sarah,' I think, as the night grows cold, quiet and dark.