My life in May

On my knees before the hearth, it's a nightly ritual of prayer and matches. I like to arrange the kindling in a pyramidded grid over the cube of firelighter. 'That's cheating,' a friend said to me once. A lazy critique, since I was the one holding the axe and the match. I could use newspaper, I guess, but having to twice light a fireplace as the sun goes down sets up a superstitious dread in me. The spack and cackle of a happy fire bodes well for an evening. 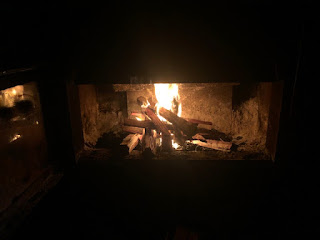 The swans have left for the inland paddocks. This year there were hundreds of them, summering out in the inlet. All night I could hear them chatting to each other. Now there is the owlet nightjar, squawking her coordinates as she begins the hunt. Driving to and from work, the sun is always low and bright, strobing between the trees, blinding me suddenly on the hairpin bends through the forest.

Selkie's best mate Sexy Rexy is back. His humans are over at the bush camp behind my house. He's part dingo and lives in a rubbish bin - just like Oscar the Grouch but much nicer. I do love this dog with his black points and dingo habits but damn does he have to piss on everything? Even my mosquito net is not immune. He turns up at daybreak and my outstretched arm tells him to get out. So he does ... but not before Selkie slinks off after him and they disappear for hours. I'd love to put a go pro on her collar to find out their travels. 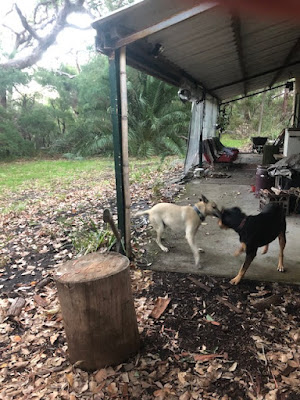 The commercial fishers are back with the beginning of the inlet season. And some old surfer/yachties camped in the hollow just near my place. There's me - circling around the idea of being alone, circling, circling and then finally settling into my nest like a dog - and then sitting around a campfire with people who are happy to tell me stories.

A prescribed burn across the inlet was going on and the evening opened with clear skies and glassed off blood red water, a true wine-dark sea of fire and light. One of the commercials gave us some flounder and we cooked them up. Fell upon them like kelpies, crunched through the crispy skins to the sweet meat, sucking white flesh from robust rib bones. I haven't eaten flounder for an age. 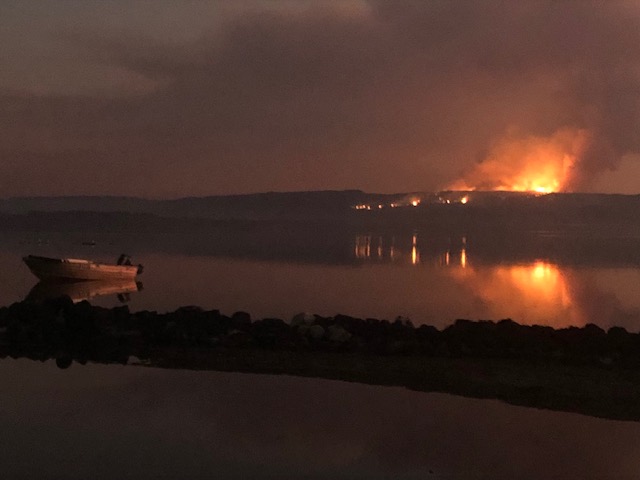 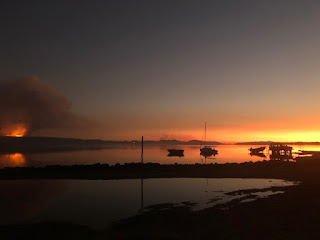 He is a quiet sort, Mum's neighbour. A sturdy man with a soldier's gait. One day I pruned the bushes on her driveway and the only good it did was to expose Gentleman John's majestic marijuana growing on the other side of the fence. For the next month, Mum had to see it every time she did the dishes. We all knew he was a good gardener but this was next level.

I'd be chopping her wood and he'd stop by the asbestos fence and say gidday. He'd strung up a dead crow on the apricot tree. There's a riot of dendrophilic orchids bouncing out of a dead marri stump too.

When I worked in the cafe, he came in for a daily coffee and paper and rang his son every Saturday morning. Because he was partially deaf, John was a shouter. The whole cafe was filled with people trying really hard not to eavesdrop. A blow by blow rendition of every show he's seen on TV that week. Every Saturday. Yes, this an obituary.

He was a Vietnam vet who 'never left a man behind', according to another ex-SAS local. When I asked about why he pulled his socks over his trouser legs, he said 'condoms while sleeping too, my friend, those leeches get in any way they can', and who in the depths of his worst PTSD sleeplessness, would walk around town with a backpack full of bricks, checking locks, securing the stations. Once he'd done his nightly round, he could sleep.

I really liked John. He was a cool guy. Two weeks ago he died of Covid and I went to his memorial today. He didn't want any fanfare. From what he said to Mum, he was ready to go. Apart from his pulled-up socks, I liked his hat best of all, how he always called me 'friend', gently, and how he drove through town, looking straight ahead.

An Iteration of Moby Dick

I've been listening to Moby Dick, read by Phoebe Judge, during my long drives to the city and back. Judge also works the podcast Criminal and she's always blown me away with her quiet and polite laying out of an outlandish story. I'm not one to fall asleep to true crime podcasts and I still avoid Criminal as a go-to-sleep option - but I absolutely love her work.

Reading Moby Dick was a wade (sorry) for me. I tried it as a kid and then even as a groan up I could never get past the bit where Ahab held up St Elmo's fire and declared to all onboard that he was after the white whale and that was all there was for it. From there, on reading, the book seemed to descend into intricacies. Ishmael's voice was lost and even Queequeg's harpoon lost all its bearings.

What I discovered on listening to the reading recently was that this is one of the best books ever written on 1800s sea whaling. Melville's diversions into manila rope, the roles of seamen, of Pip offering up his very bones to Ahab, of boys black and white moved from ship to ship, of how to dismantle a whale at sea, of how to boil them down into barrels, of the cooper and carpenter, speak to a whaleman's experience in a time when they were three years at sea.

It sounds macabre and it was so. Ahab's obsession with the white whale is but a sideline hustle in this book. It's like an instruction manual, a pretty accurate oral history and a call of warning to landlubbers before the great wars. 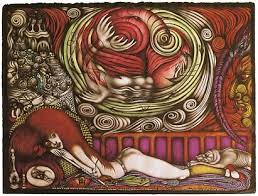