Medusa and the lobster 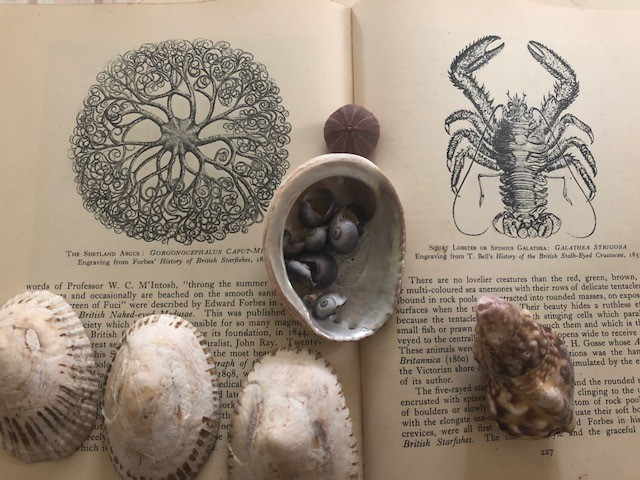 I have a beautiful old book of natural history with engravings and colour lithographs of all sorts of weird and wonderful things. It lies open on my kitchen bench and this week it is the medusa starfish and a spiky lobster, that I pass on my way to the kettle.
Posted by sarah toa at 2:30 PM 5 comments:

I’m supposed to be up here (points to mountain peak) but the because of the rain over the weekend, there is no fire tower today. It’s my first rostered day for the season.


The teachermen are back in the hollow just down the hill from my place. They convoyed in yesterday. I sit in bed reading Patti Smith and in their camp they play Neil Diamond and Leonard Cohen and shouts go up as one of them wins a hand. The first year they arrived here, all nine of them, Cohen had just died, and as the strands of his Hallelujah’s drifted through the trees, I knew they would be good people. They drink rum and beer and wine and sing a lot. They light a campfire and lay out swags. They are kindly men; these teacher men and they seek seven day’s healing at the inlet after a year full of teenagers and politics. I wonder what the teacherwomen do. Maybe I'll get to go up the mountain tomorrow.
Posted by sarah toa at 2:25 PM 8 comments:

Sylvestris - living in the forest 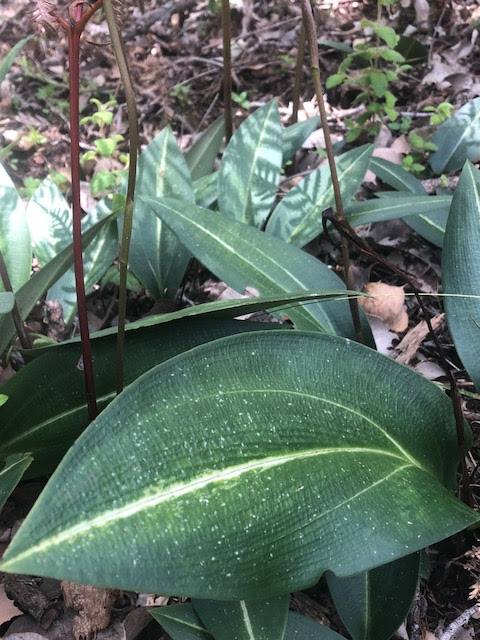 Just wait around for a short while and nature will throw on an event for you. I didn't have a camera the day this lady's lover arrived but I did see him and he was dapper. Cryptostylus ovata, or the Slipper Orchid, has a wasp for a lover. There are small forests of the orchids over near the burn. 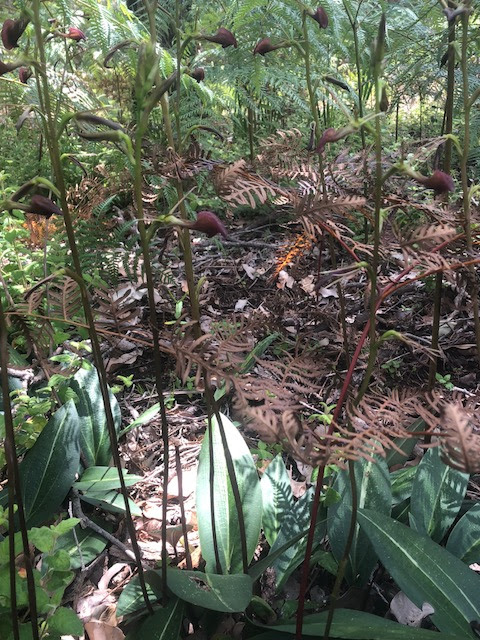 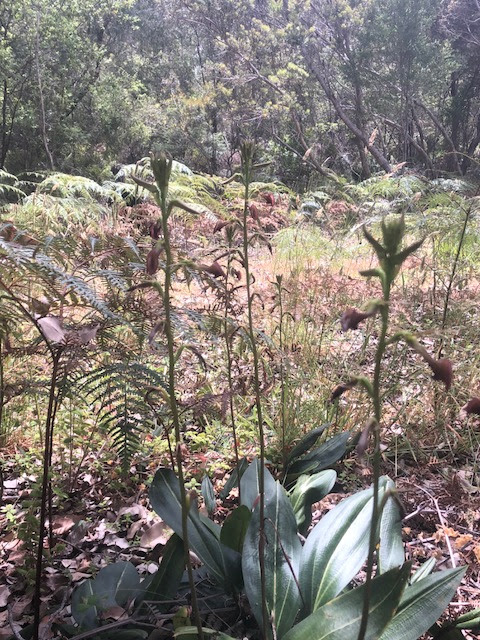 Billardiera or what Noongar call Cummock are a tasty little bush food, that is glorious this year, straight outside the front door. 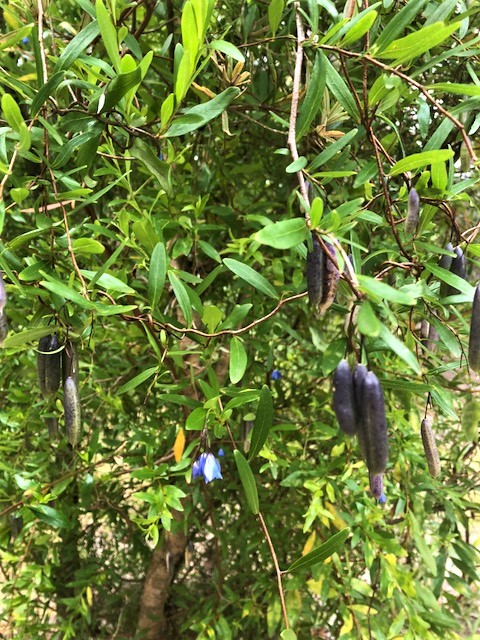 I know when the sea eagle is about: the seagulls start carrying on. There was a herring frame down on the beach and everyone wanted a piece of it. Seagulls out my way have probably never seen a hot chip. Their diet is pure bush food. Seagulls harried the eagle who swooped around for half an hour and then the crows joined in. Cawk ... cawk! 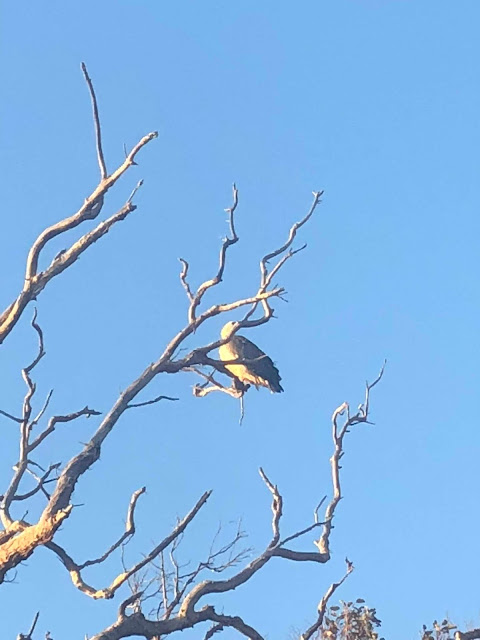 Finally Selkie joined the fray. She hates anyone who is after her fish, even if she's not interested in eating it herself. I think the rest felt the same but I was all good, cooking up herring fillets in a fry pan. 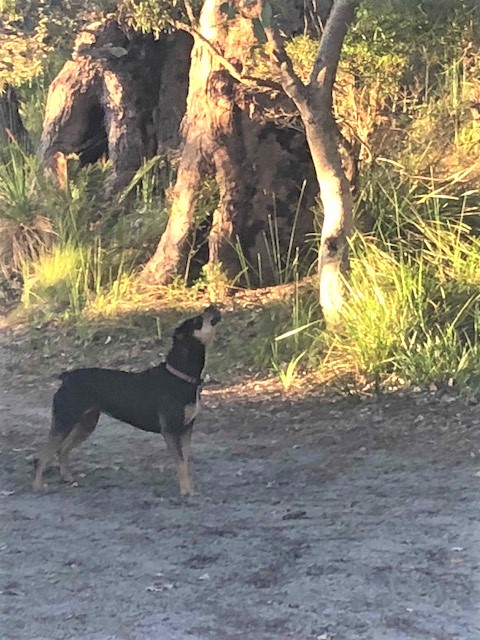 
Coz we're special
‘I’ve just roared into that special time of my life!’ she told me and this was quite unexpected, as he filled the kettle at the tap. No woman has ever said this to him before. Or any other bloke he knew. ‘There are no symptoms, I’ve just stopped bleeding.’ Too much information.
‘So, what’s with the hot flushes?’
‘No, nothing, just no blood. I’ve been wondering,’ she went on, and he wanted to shut his ear flaps but this was kind of interesting too, this mystery of woman. ‘I always thought that we humans were the only ones to experience menopause, you know, the only mammals not to be fertile until we die. Can you imagine that? Giving birth until you die?’
‘No,’ he said.
‘Well, you would if you were female. Anyway, it turns out that certain species of whales go through the menopause too.’ She went on to explain how elderly female orcas, narwhales and belugas were found to have ovaries that were decrepit, defunct. Scientists, she said, thought that the reason for menopause in these whales was grandmothering and knowledge. While everyone else was either fighting or fucking, she said, the old ladies knew a thing or two about the way to the feeding grounds.
She looked triumphant on the deliverance of this hypothesis.
He handed her a cup of coffee. ‘That explains the mass strandings,’ he said. ‘Granny got a bit confused after the dementia.’
‘Aw, I dunno about that.’ She looked confused herself.
‘Anyway, I wish you well on your journey,’ he said.
‘Thank you.’ Her tone, like his, was formal. ‘Now. I’m looking for a roobar. Can you have a hunt around in your town? It’s a Mazda Bravo. Needs indicators.’

Beauty
All Beauty wants is a quiet house in the country, a farm maybe, and a black goat with yellow eyes. She wants to record a dumb little pop song and make lots of money from said dumb little pop song. She’s talented. I tell her she could call the song A Dumb Little Pop Song.

Shipwrecked
And the boat was smashed to bits on the last days of the rising inlet. For three days she watched it bouncing against the rocks and she wasn’t strong enough to rescue it on her own. She’d tried, wading into water cold enough to snap you off at the shins. Finally, some visitors, men in their jocks, dragged it out of the water for her. The thwarts were gone, the bow was gone, there were holes where all the rivets should be. After several months of agonising about fixing it, she put the boat on a trailer and drove the thirty kilometes to the rubbish tip.

No, they are not for that, Sarah Toa
A man turned up at the shop with magnetic clamps attached to his T-shirt. ‘I have something special for Robbo,’ he said, gesturing to his shirt.
‘Are they nipple clamps? Really? Oh wow!’ I said.
He clutched at the golden cross around his neck the way certain women clutch at their pearls. So maybe not nipple clamps.
‘They’re for slotting your sunglasses into,’ he explained.
‘So they’re not nipple clamps, right?’ I asked.
‘Definitely not nipple clamps,’ said my boss, grabbing the little metal contraptions and putting them under the counter for Robbo.
Thanks. I think you’ve successfully traumatised my best customer, she whispered later.

Cos we're special
‘I’ve found a roo bar sexy grandma $150,’ he sent a text message and received a reply from her a few hours later. ‘Thanx. By the way, I’ve never heard of narwhales, belugas or orcas stranding. Have you?’
Touché. She always liked to have the last word.

Beauty
She finds that quiet little house in the country. It’s green and lush and cows live there. It’s cheap to rent and includes a music studio because it’s owned by a man on the east coast who produces dumb little pop songs. There is just peace and the black goat with the yellow eyes. That’s the next thing.

Shipwrecked
On the highway, she starts to notice the boat is slipping off the trailer. There is a car behind her. She’s looking in the rear vision mirror and thinking I don’t remember the bow being so far away. By the time she pulls over and the tourist passed her, the boat was just short of dragging on bitumen.
She’s busy untying straps, cursing, pulling the boat forward and retying straps when the next tourist coming from the other direction slows down and turns on the highway and comes back. Of course, she appreciates this. She’s been stuck so many times on the side of the road with the bonnet up, looking at a dodge radiator/gasket/clutch hose. Most of the time, cars fly by oblivious. She’s sure if she looked less Boadicean they’d stop. Anyway, this one did.
‘How are you going?”
‘Hi, yeah I’m fine thanks. The boat was coming off.’ She added as a dramatic afterthought, ‘She’s going to the tip. She’s a shipwreck. I’m very sad.’
‘Oh, that is indeed a travesty!’ The man said from the window of his BMW and his wife nodded in the passenger seat. ‘She’s a beautiful boat!’
‘Well, thanks for stopping,’ She said. ‘But I’m okay.’
By the time she got to the tip she was sweating. The Tip Shop Guy looked at her, then at her boat. She explained that it was a poacher’s boat; that the poly pipe lining the gunwales was to soften the sound of the net’s lead lines, to quieten a night’s work.. ‘Oh my God, she’s gorgeous!’ and then they tipped her upside down on to his trailer and he looked at the damage. ‘Actually, she’s fucked,’ he said. ‘I’m taking her home. She’s too good to stay at the tip.’ All she could do was thank him.