Cracking champagne over the bow of a book 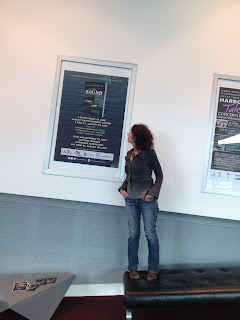 On Friday night Kim Scott launched my book at the Entertainment Centre. The whole event was quite snazzy! Here are some photos. 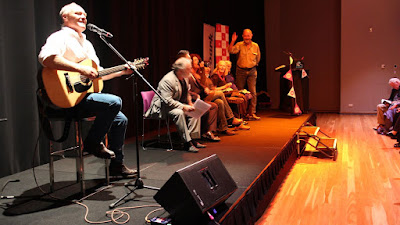 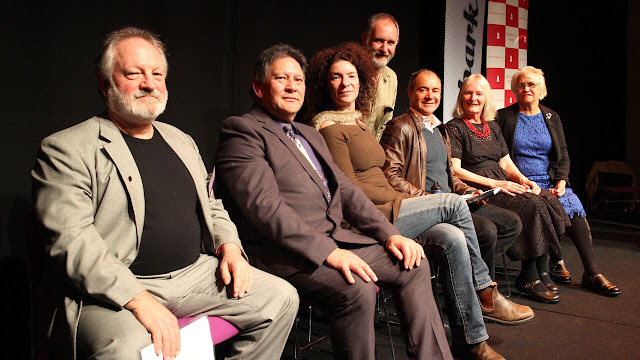 Ian from Fremantle Press, Tuaari who gave a Maori blessing, me, John who was a splendid MC, Kim who launched, Kathryn who read from The Sound, and Carol who performed a Welcome to Country. 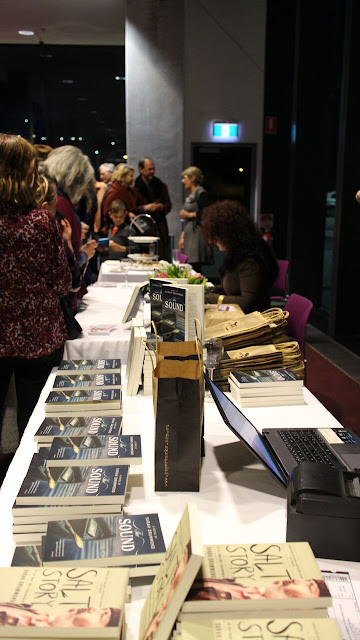 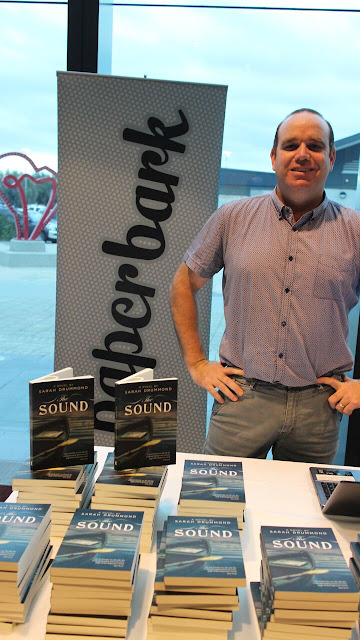 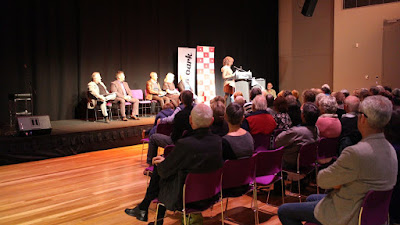 That's me, saying something, me not falling apart on stage. 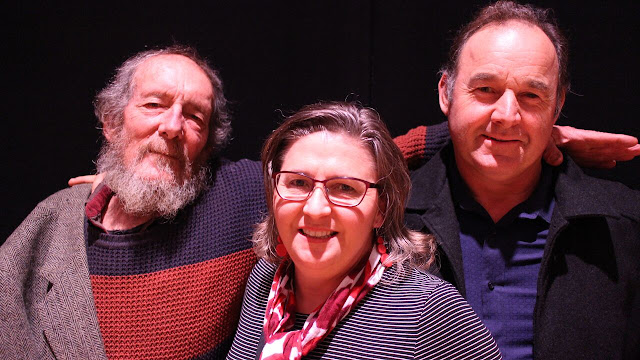 And this is my Dad, family friend Fiona and winemaker extraordinaire Richard Bunn 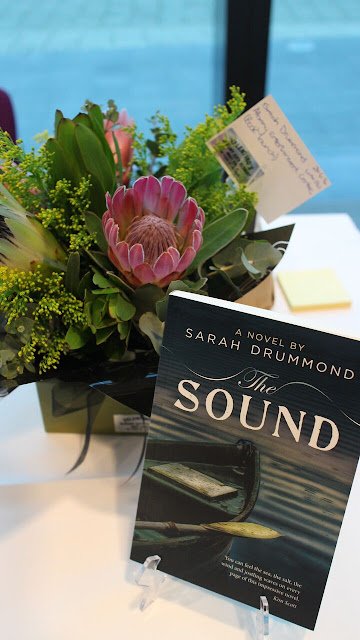 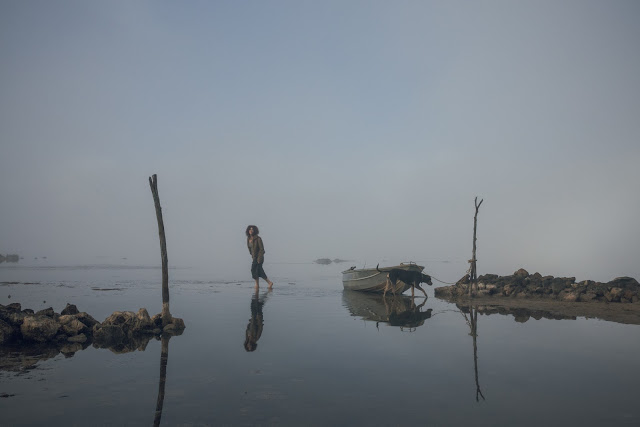 This is the first of a series of posts about writing The Sound. In future posts I'll cover writing Indigenous characters as a wadjela yorga (white woman), how it takes a village to write a book, seascapes and landscapes in my books, and my own journey to publication with Fremantle Press. In The C Word, I'll try to nut out how I feel about imposing a work of dark history and creepy characters onto the world.

I'm in preparation to bare my throat (this is nothing new). No, not to the deities on this longest of long nights ... just to anyone who reads my work. And I'm not being flippant here. Frankly, it's terrifying, every time. Thankfully one official review has already landed in my inbox and it's a good one - four stars from an industry booksellers magazine.

"... the gritty descriptions of life in these times make this a fascinating read. Based on a true story and clearly grounded in the author's own experiences at sea, this book is an engaging and thought provoking
read, despite being quite confronting at times." Books + Publishing, National. May 2016.

There it is. The C word. I've had some interesting early comments about my book The Sound. A friend who has just read it said, "Sarah, I loved it! I was there. But if I didn't already know what these people were like, how brutal they were, I would have been shocked with what you've written. I would have thought you were exaggerating the violence and what those women went through. But I already knew the story and I was ready for it."

"Am just so grateful to be moved and confronted by bloody resolute and inspired writers like you," wrote another friend, who had picked up an early copy from Paperbark Merchants and read it while on an island holiday. There's that C word again.

The editor of the state newspaper's books page rang me for an interview and used the C word as well. A book sales rep stopped for a reprieve while reading it. Oh dear.

Reader, you may notice that I'm picking a single word out of what is otherwise praise for The Sound, like an angsty teen searching her beautiful body for blemishes. The thing is, I've been thinking for quite a while about how I'm going to talk about this book, because once you've published a book, you have to appear in public and talk about it, to pique people's interest, contribute to our literary culture, and hopefully sell the product. The Sound, although also inspired by history, seascape and working on boats, is an entirely different beast to Salt Story. Salt Story is described as charming and funny, whereas the only jokes in The Sound are usually made by women in the face of extreme deprivation and violence.

Writing The Sound, as WineDark readers will know, very nearly did me in. (Here is a link to Predator Dreams for those who haven't read it.) I don't know how the Ruth Rendells of this world can regularly produce works of such pathological violence without staggering from their studies profoundly damaged. They must just be better at protecting themselves than I was.

Maybe the confronting aspect of The Sound, apart from the violence, is the depiction of how people behave in a world without law - and that these behaviours haven't changed despite our pretty solid social contracts and legal systems. "Oh my God, that Bailey bloke is so creepy," shuddered my friend. Well, yes he was. Yes, he is.

The Sound is on da shelf at Paperbark Merchants! 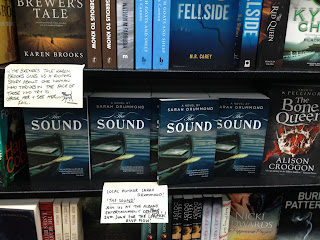 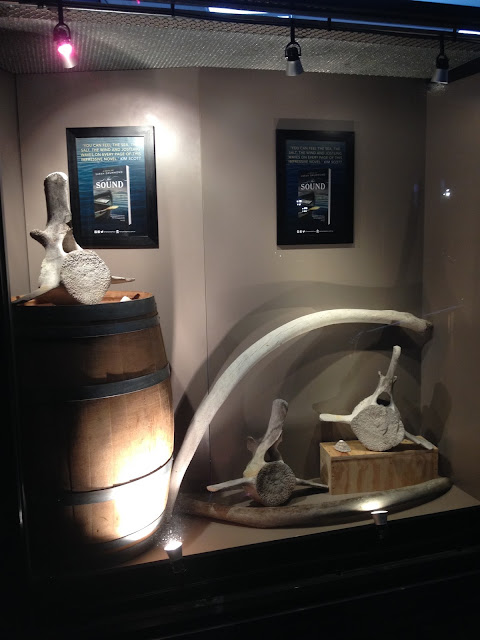 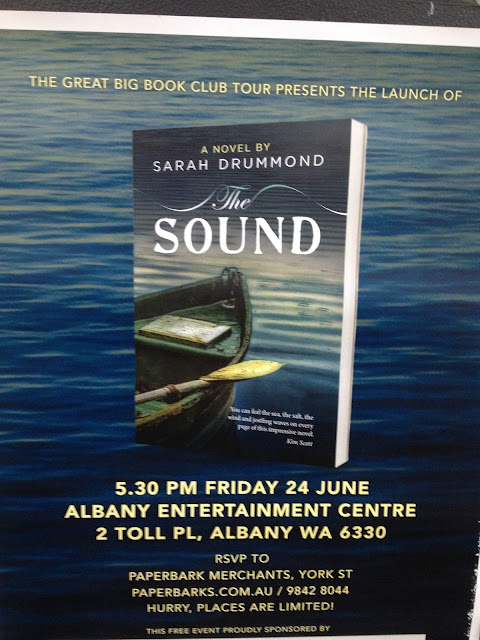 Yesterday I caught up with my son, who asked if I'd like to go to work with him, see what he's up to during the week. He's farm handing and he introduced me to the big mothers, their litters of squealing black and white piglets and the big old patriarch, "everyone's favourite" Tiger. 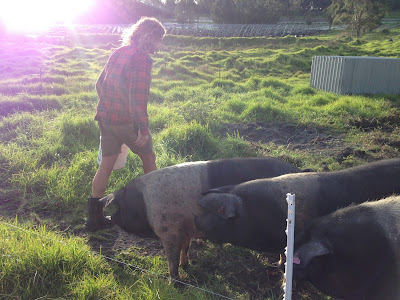 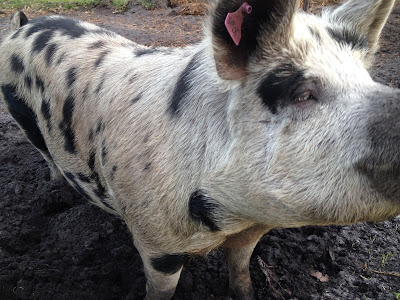 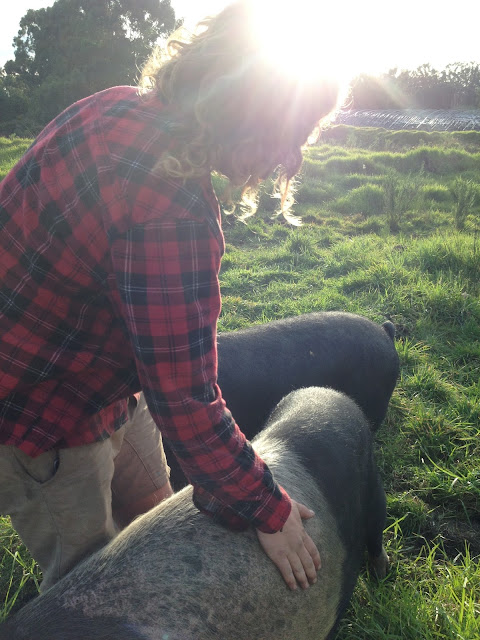 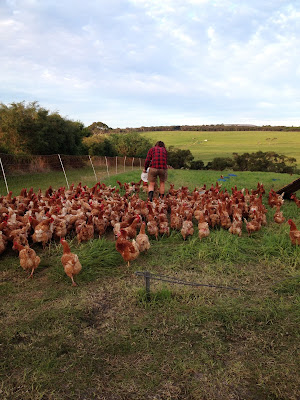 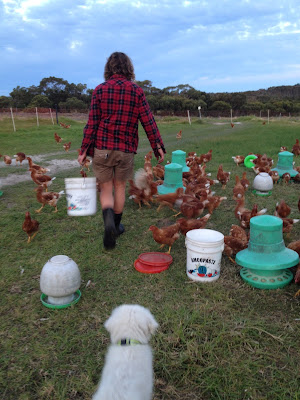 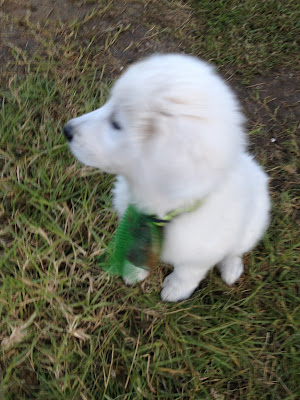 In the last picture, Obi the Meremma pup is in training to guard his flock of Isa Browns. He's so cute and fluffy! He even had a green ribbon tied around his neck. Not a cloth of pagan Celtic ritual, I'm afraid. It contains the carcass of the last chick he killed. So, um ... still in training, yes.

It's a multi-layered farm where the major produce is strawberries. We drove past aisles of avocado and lemon trees and fed the pigs on cracked eggs on our return from the free range chook caravan at the top of the hill. In the summer, the pigs eat strawberries. It was beautiful to see Stormboy on his rounds. I wish I could show you the vids of the piglets. Hilarious.
Posted by sarah toa at 5:07 PM 2 comments: