Well, that full moon eclipse is kicking on nicely.

Monday. I am heading out of the driveway for a routine taxi-drive-of-child-number-one, when we both see in the rear vision mirror the disaster puppy hurtle straight into a roadtrain. Somehow, after getting flicked onto the curb from one wheel, he manages to bounce back for seconds under another wheel.
Of course he survives, because otherwise this story would start very differently. We bundle the dog into the car and stumble into the vet's waiting room. The dog vomits the blood from his lungs onto the carpet and then collapses when his heroic adrenalin finally deserts him. Everyone else is there for puppy vaccination day and they all look quite alarmed.
On Radio National, a journalist interviews another journalist who says, "Oh mate, if we run out of stories, we'll just invent a leadership spill."

Tuesday. After all night watching for internal injuries and hemorrhaging and trying to keep the place warm, we go to school rather late this morning. I cancel everything. I drive home after the school run and stay under the doona, only going out to chop some wood. The dog is in a world of pain. He has the perfect imprint of a  wheel nut between his eyes. He looks like he feels, like he's been hit by a truck. His body feels all hard and lumpy.

Wednesday. Digger has a weird lump on the back of his neck. He stops coughing up blood but he can't walk real good.
My friend is walked out of her two year job. She's gotten a bit too bolshie with her employer and, being an old union girl, thought she could make a difference. The rest of the staff, like antelopes being hunted by cheetahs, stand by panting after the chase, chewing cud, concerned but glad that someone else is being devoured and not them.
A journalist on Radio National speculates a leadership spill.
Even though I was in front of the fire and under the doona for two days, I fall asleep over my book at seven thirty. The kids turn out the lights and put themselves to bed. I sleep for thirteen hours.

Thursday. We are all late to school again. I've written apologetic notes.
The dog has commandeered my couch.
Bobcat is traumatised.
It's on the radio during breakfast. We have a new Prime Minister.

Friday. Old Salt is still pissed at me because I told him that ringing me before dawn to make sure I am awake is Bullshit. "I'm not Bullshit, I'm an Honest Person," he says.
How can I argue with that? It's dawn and I'm really bloody cold. Whatever.
We catch sea mullet the size of salmon. "The most splendid fish in New Holland," said Robert Neill in 1841.
A man at the boat ramp wanted to buy one and Old Salt said thirty bucks. Thirty bucks for a mullet! One mullet! they're great, but not that great. He kicked the tyres and left.
The dog has decided he belongs inside the house and demands I chop some wood for his fire. Apart from the wheel nut scar on his forehead and a slight limp, he is back to his normal self. To look at him, no-one would ever know he had been hit by a road train (twice), had one lung punctured and several bones broken, four days ago.

This afternoon at the boat ramp, when we headed out to set nets for leather jackets and sea mullet, I saw the three legged dog, waiting for his sailor. 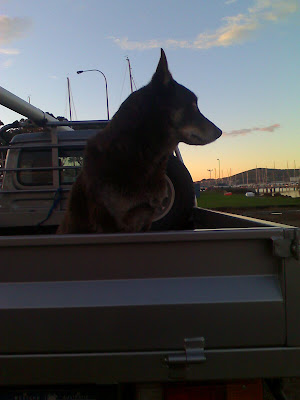 Taking the Selkie out to Bald Head was a crazy idea. Old Salt tried to say something but, as usual, I ignored the fantasy that I cannot beat every windmill I tilt at. She got retired at the port marker before the channel to the Sound and I jumped into the (bigger, more powerful) Qunitrex. Later, after dropping off the journalists, the Selkie got a tow home. 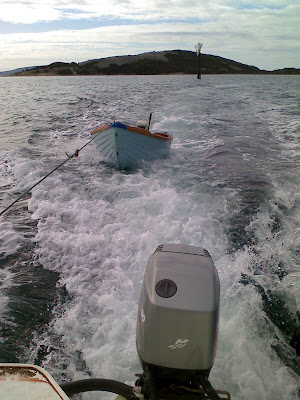 The motor? She's a burster but the hull is built for a leisurely laze on millponds and rivers - not dealing with windwaves, wakes and waves. I want a boat I can take to the islands and head out into open sea without being downright terrified and bored shitless all at once. Plus, I just can't work out the trim. 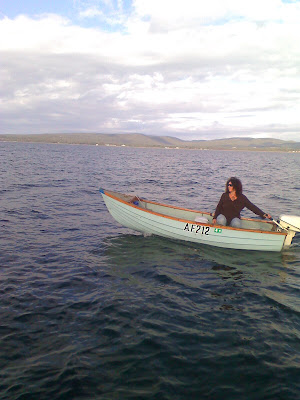 But, despite abandoning the Selkie, heading out with the flotilla to protest against the mining company and the port authority dumping their crap inside King George Sound was absolutely fantastic. Roaring up over huge raves and slamming down the other side and seeing all those boats by our side heading out on a mission to Bald Head - fishing boats, dive boats, tour boats and those folk in their old plywood boats - priceless.
After trailering the boats, we headed for the lay-by on the highway, where Grievous was parked waiting for us. He had an icebox on the back of his ute and gave me a few very nice specimens of Pallinup sea mullet, bless him. It was a splendid day all round.
Peter Garrett, federal environment minister, okayed this most dodgey project on Friday.
Posted by sarah toa at 2:19 AM 10 comments:

Calypso at the Ogygia Hotel

"Stay with me ...
...is it not good enough that I receive you, I nourish you, I lick the briny from your barnacle'd wounds?"

Poor Calypso ... after all those years on her island, she wonders if she is better off getting work on the mines, or joining the yacht club, instead of waiting for shipwrecked sailors who are forever planning their escape  ...

Indiana Jones at the Ogygia Hotel

So she takes off her dress.
She minds the wounds of this Indiana Jones of the taxation world. He'd washed up on her shores, bruised and battered from nine days of scotch on the rocks. She checked his star sign and she licked him well again.

"I am an important man!" He told her. "I'm meeting with Rudd come the morn!"

Outside, her sea crow clattered on the tin roof with impatient, flat feet. Sea stormed the shore.

Inside it was warm and he was ready for her.

A cold bleep at five in the morning. He dressed and patted himself down.
"Stay with me," she said.
"There's Rudd. Today. A plane to Melbourne."
"So build a raft." (And then we'll have some breakfast.)
The drive. The flight, he says.
He pines.
She stays.
Posted by sarah toa at 10:37 PM 2 comments:

Odysseus and Indiana Jones at the Ogygia Hotel

Okay. What I'm really trying to get at here has nothing to do with Flinders drawing a freakishly perfect map of Australia after a three quarters circuit.
It's all about the goddess Calypso, the muse of many a sea-going creature and how her, and those of her ilk, manage to detain men for a short while from their most (self) important endeavours.

'After nine days he drifted ashore on the island of Ogygia, where lived Calypso, the daughter of Thetis by Oceanus, or may have it been Nereus or Atlas.
Thickets of alder, black poplar and cypress, horned owls, falcons and sea crows and trees sheltered Calypso's great cavern. Here the lovely Calypso welcomed Odysseus as he stumbled ashore. She offered him plentiful food, heady drink and a share of her soft bed.'

"If you stay with me," she pleaded, "you shall enjoy immortality and ageless youth."
Under this premise she detained him for seven years and tried to make him forget Ithaca. But he tired of her embraces and would sit on the sea shore, staring out to sea.

Finally Zeuss ordered Calypso to free him. She had no choice but to teach the Voyager how to build a raft. She promised him ageless youth but Odysseus wanted a full life, not immortality. On the other hand,  had he stayed and chosen eternal life, she might have fucked him to death anyway.

Matthew Flinders, Odysseus and Indianna Jones at the Ogygia Hotel

Matthew Flinders, intent on circumnavigating New Holland (and thus proving it was a continent and not a series of islands)  in the earliest part of the nineteenth century, was forced to sail north to Timor and finally to Mauritius, through a series of extenuating circumstances. Modern day politicians and people such as myself would call this kind of executive stress 'extenuating circumstances'.'  Flinders called it exhaustion, a boat full of woodworm, starvation, scurvy.
Due to a lack of email or text messaging, Flinders limped into Mauritius completely unaware that the Napoleonic wars had kicked off again. The Governor there, Daecan, probably would have preferred a post elsewhere like India, but he was stuck looking after an island out in the middle of the Indian Ocean that everyone/nobody else wanted. So poor old Flinders was locked up there for six and a half years by the disgruntled and colonially-jilted Daecan.

"I am a very important man!" Deaf ears. Flinders, halfway through writing his charts of a continent that he named Australia, was imprisoned and all of his writings and mathematical meanderings removed from him. He was sent up into the lush hills of Mauritius to be under house arrest with the most beautiful women of the French colonies. and there he was held for six and a half years.

Blame it on Calypso. There's a history with that old sea bitch.

Every morning Matthew Flinders put on his white linen shirt, walked, wrote in his journal and worked on the maps of the new continent, rightfully terrified (given the current political climate) that the places he'd tagged - Bass Strait, Flinders Island, King Island, Australia - would be renamed by his French captors.
Every day, he lived with the beautiful French women. And everyday, he pined for his wife, Ann. His frustration at the coitus interruptus of his work and his marriage is palpable in his diaries.

And you know, in the 1940's, Ernestine Hill sailed through the Gulf of Carpentaria with a fisherman who seemed to know his way.
"Whose chart are you using?" she asked him.
"Flinders'. No one has ever produced a better chart than Flinders, to this day." the skipper replied. 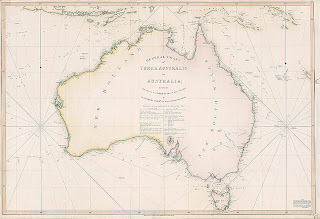 Image by Matthew Flinders, courtesy of the National Library of Australia.
Posted by sarah toa at 9:04 PM 2 comments: 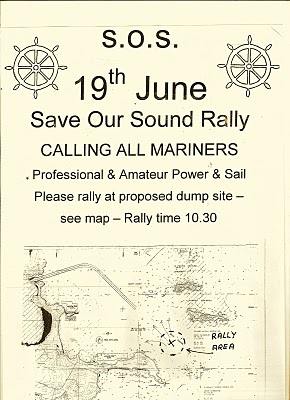