'This is why,' the doctor explained when I asked him why my left lung was bleeding. He was a jovial Scandi sort. He held up his clipboard. 'This is your lung, right?' He smacked it hard into a pillar in the emergency room.
'O-o-okay. I think I understand now.'
'Broken ribs hurt don't they?' He said, as I crawled, gasping, onto the hospital bed.
'Yes.'
He rolled some ultrasound goo around, checking for air pockets and also 'if you are pregnant.'
'Oh Doc, don't make me laugh, it hurts too much.'

Two days ago, drafting cattle with Stormboy, the vet doing the pregnancy testing looked at me with concern. 'Do you have experience with cattle?'
'No,' I said. 'But my son does,' watching him float around the yards like a dance between boy and beasts, and the vet nodded. 'Yes, I was out here last year and the one before.'

Halfway through the testing, it began raining and then blowing, the big gums whipping around over the stockyards. The cows, udders swelling, lowed for their calves. The banging of metal gates and Stormboy yelling 'Hoo up! Come along now.' Everyone was a bit twitchy, all confined into yards. One angry lady went for Stormboy's brother. Then for me. I was standing against the yard fence with my tally book and saw murder in her eyes and I couldn't run up that six foot fence fast enough. She was so quick but I climbed the fence quicker, tripped on the top rail and landed on my back on the other side. Oomph.
Stormboy was shouting 'Mum! Mum!' and I lay in deep green grass remembering the last time I was winded, unable to breathe. I was three years old and had fallen out of a tree house. The sensation is terrifying, like being buried alive.*

I was feeling a bit fragile, but necessary, if you know what I mean. We had to stick it out for the next few hours while the vet was here but my inner whiny monologue was 'Why can't someone make me a cup of tea? I'm sore. I'm wet. That number 224 is a crazy bitch ...' (She charged Stormboy as he ran to check on me apparently.) 'There's always one,' the vet said to me. Later a friend observed, 'Yes there IS always one. In the stockyard, in the writers workshop, at the pub. There's always one.'

I drank enough wine that night to sleep okay but yes, wine is an inflammatory in many senses of the word and I woke up yesterday morning in a world of pain. By mid afternoon I could hardly move and knew I'd broken a few ribs. But still I thought I'd tough it out because there's not much can be done with ribs. I decided against going back to the inlet where I'd have to chop wood and drive 20 kilometres along corrugated gravel roads, and to stay at Stormboy's for a few days more. But by last night I was coughing up thin tendrils of blood.  This morning I dragged myself to the hospital. Described my adventures to the doctor and, a few hours later, discovered the utterly delirious release of codeine after an injury.

Yesterday afternoon, at my height of heightened pain, I had a phone interview with a Noongar Elder. We were talking about the courses I teach. Every time I moved the wrong way, I'd moan or gasp and finally he asked if I was okay. Because the courses I teach are great, but not that great. I muttered something about a cow and my ribs. When we'd finished our meeting, he asked if he could pray for me. He then asked me to put my hand on my ribs and, over the phone, prayed for Jesus to heal me. Sung me, Jesus way.

* not speaking from experience here. 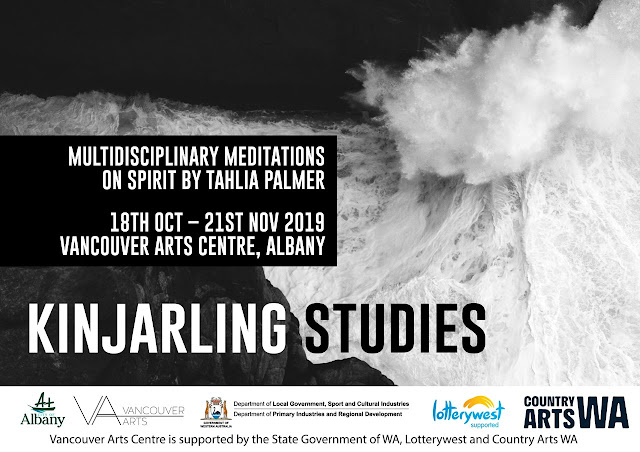 This exhibition is amazing! Tahlia Palmer's work is with photography, audio, film and an extraordinary rendition of the stone fish traps in needlework and beads. The above image is from The Gap. Wonderful stuff. If you are in town, please go see.
Posted by sarah toa at 10:35 PM No comments:

Some days I feel like I have lost something, some kind of juju that I used to possess. I should be getting braver and better at what I do. Building shacks, writing books and fishing for a living and now my ability to wield an electric drill let alone write a whole bloody book ... well those muscles feel atrophied. (Caveate here: I have felt the same way at the same stage of my last two books, like the thing's a dog and not a very nice one at that. It's the problem with pre-resolution, lack of confidence and no plot answers in sight. I know this shit, right, but still I suffer for my art). The electric drill bit, *see what I did there* is another muscle and it's laziness that's allowing me not to pick it up, fix the bung on the dinghy and get the boat out on the water. After destroying two boats when I didn't pull them high enough ashore during a storm, I don't trust myself to launch it on my own. Hence the bung conundrum.

Anyway, all whining aside, it's been pretty good around here. I live entirely off grid. That makes washing clothes, doing the dishes and watching movies more interesting. I have a gas-powered refrigerator and hot water system, so I’m not totally wilding it, but no electricity, water or mobile networks mean it’s pretty much back to basics. I pump water up to the top tank which gives me water pressure to said hot water system. I always know when the water up the top of the hill is low because the hot water cuts out on me. The pump's not working at the moment. It's cat and mouse between water running low and pump fixed. I read books and download podcasts. I’m writing this on a solar powered laptop from one of the most beautiful places In The World.

This morning I drove up the track to head 200 kilometres to work at the uni. I drove through the karri forest, past the dead boomer roo, who hasn't been opened up by crows or eagles yet and no human has the stomach to drag it off the road. Pretty ripe. A few hundred metres on, this scene added to the dendro-dance macabre: 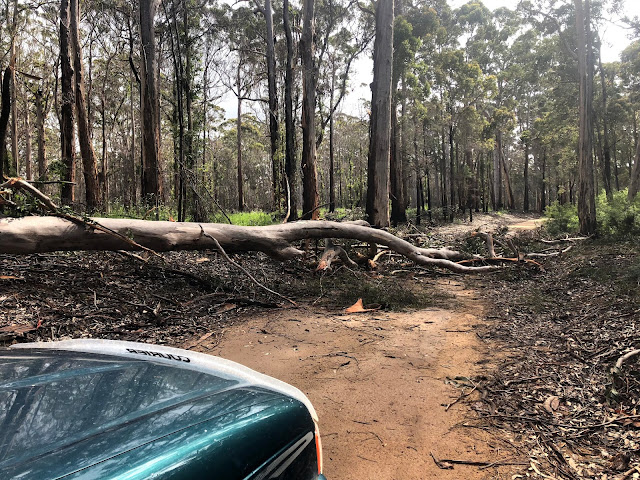 This poor karri was quite alive when it fell. Maybe yesterday's rain loosened it from the earth. Maybe the recent burn compromised its buttresses. Dunno. I was just as sad for this fallen giant as I was about the big male kangaroo. It always eeries me to see a tree downed like this. 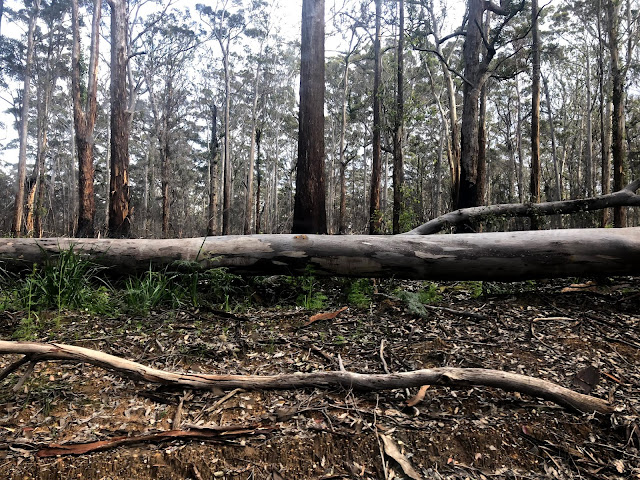 However, I was able to drive around the old man kangaroo. This new situation required the old vervy, creative Sarah Toa and she was out and about to check a possible route and put the front cogs into four wheel drive. I'm pretty chuffed that I wasn't on the track when this mother came down. Below is a picture of the spot a few kilometres along where I usually sit on the track. I can get four bars of mobile phone reception there and do my banking and email business. A near miss. I try to avoid it these days during heavy winds. Straya mate ... stuff here can kill ya. 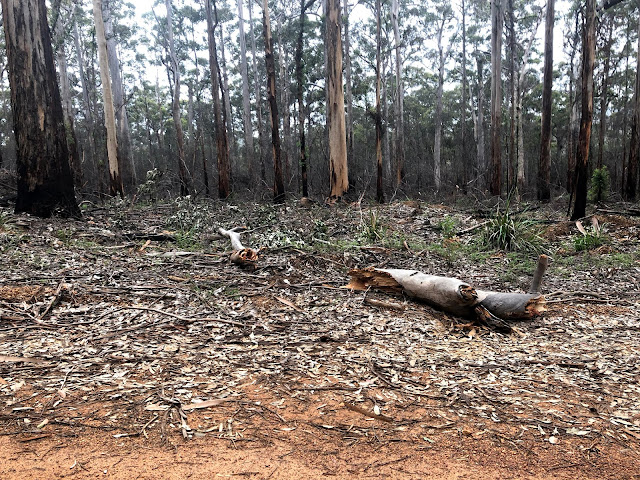