"... the boat is a floating piece of space, a place without a place, that exists by itself, that is closed in on itself and at the same time is given over to the infinity of the sea and that, from port to port, from tack to tack, from brothel to brothel, it goes as far as the colonies in search of the most precious treasures they conceal in their gardens,

you will understand why the boat has been not only for our civilisation, from the sixteenth century until the present, the great instrument of economic development ...
but has also been simultaneously the greatest reserve of the imagination.

The ship is the heterotopia par excellence. In civilisations without boats, dreams dry up, espionage takes the place of adventure, and the police take the place of pirates." 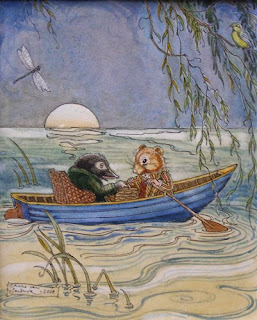 'Ratty and Mole' by Charles van Sandwyk
Posted by sarah toa at 11:01 AM 3 comments:

Down With Being a Groanup

The New Romantic rang me awake this morning. "There's a yacht, he wants some crew. Sydney, two weeks and return airfare. Whaddaya reckon? He wants to know by lunchtime."
It was a bad start to the day. I fell back into my bed (after I'd given the New Romantic some choice expletives, at which point he said "Well, ask someone else and wreck their day too, will you? He needs someone by lunchtime.")
I'm a groanup now, dammit. I have responsibilities, y'know?

The last time this happened, I was seventeen and a half. The town jetty called me down regularly via that sea psyche telegraph, demanding I visit to check out who was catching squid or calling by from Mauritius. I was visiting friends with a cargo of shark and the Cockney Rebel was double docked with them.
"Come to Tasmania with us!"
"When?"
"Dawn."
"Okay."

Three weeks later, I sat on the docks at Hobart and contemplated my next move, with a sunburnt nose and empty wallet. I got a job barmaiding at a little town north (after a rather nasty hitch hiking experience with a Romanian wife-hunter willing to pay, who would not give up my backpack until I created a rumpus in a cafe where we stopped for a pie.) There's a whole lotta shit in this paragraph huh?

I got a job barmaiding at a little town north, collecting myself and some cash. "Do you know how to pour a beer?" "Of course!" Being seventeen and a half, my barmaiding experience was nil, but the beauty of youth saw me through. My first beer to pour, as the new star barmaid of this tiny town pub, was a Guinness. Nobody but the newly-supplanted local barmaid minded.

This morning's phone call woke me up. So naturally, I headed for the jetty.
Posted by sarah toa at 8:44 PM 5 comments: 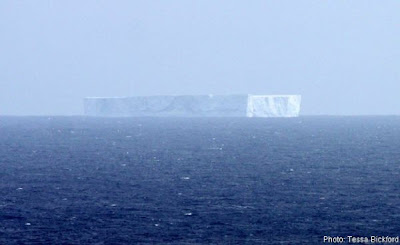 Icebergs are heading north to New Zealand again. Within the next few days, locals in Sunny Dunny may be able to spot tabular chunks of Antarctica from Taiaroa Heads. This piece lurked by Macquarie Island on Monday.
Posted by sarah toa at 1:57 PM 2 comments:

Labels: on the road again, weather

The Art of Sea Doggery #2 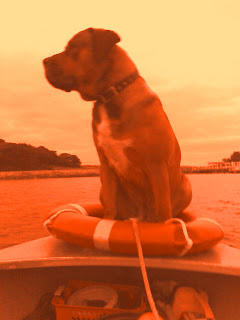 The disaster puppy has so far escaped my clearing of the decks, when it comes to pets and extraneous baggage. Originally he came to me when his owner went up north "for a few week's work," one year ago now.

I would ring, usually on days when I'd been to the dentist for a filling and come home to find Digger had pulled down a verandah post, utterly destroyed my favourite chair or dug up and rolled in all those disgusting things that fisherwomen tend to bury in their gardens. "Come and get your fucking dog! Put him on a plane! He's not my dog."
This became my refrain. "He's not my dog."
People say to me, "Oh, he's so lovable and cuddly. He's a good boy"
"He's not my dog."
And they'd look at me with a sly smile and say, "Yeah but you love him, don't you."

I started taking him fishing. He took to sea doggery like a true professional. The myriad of disgusting things he could eat on a small fishing boat probably helped. He'd sprawl over the nets, his puppy guts bulging with rotten starfish and crabs. As he grew, and grew, (Digger at one stage was putting on ten kilos a month = one cup of sugar a day) I watched him develope his attitude towards the sea and its creatures, and I trained him to to behave well while we are working. 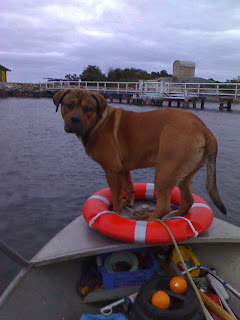 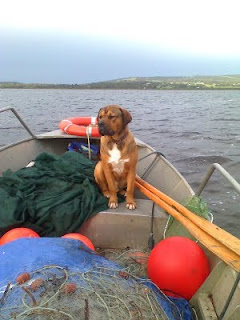 Now, he sits on the thwart as we play out net. He jumps down the moment the last buoy is thrown out and noses around for week-old trumpeters lying beneath the nets. (Did I tell you he has disgusting habits and a cast iron stomache?) He totally gets the whole fishing thing. "He thinks we're catching them all for him," said Old Salt. We were out on the channel at night pulling in nets under the fluorescent light. Digger leaned over the gunwale and watched everything that came up, waiting for fresh trumpeter. 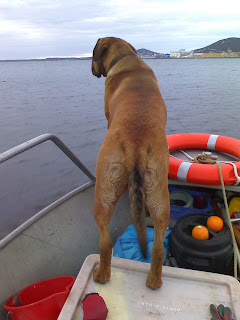 He seems so certain that we fish for him alone, and is so robust in his motivation for food, that he has become a grand pelican deterrent. When I take him walking on the beach, pelicans are completely safe from his attentions. On board, picking up nets or crab pots, things are different. Pelicans get cheeky and begin to behave like sea gulls at a beachside barbeque, sometimes resulting in tugs of war over a mullet or black bream. This dog has them sorted. They are his fish thankyou very much, so fuck off! He's gone over the side four times now after pelicans, dived in head first and surfaced like an ungainly seal, spouting brine, watched by a smirking circle of those feathered kings and queens.

Since the last failed attempt at sending him north on a plane, Digger has stopped chewing up my furniture and dismantling my house. He seems to have finished teething, fingers crossed, and is evolving from a disaster puppy who grows exponentially every week, to a giant, solid, rock of a mate. But he's not my dog.

The other day, his owner flew into town and picked him up for a few days. I arrived home to a strange stillness. For a little while, I felt desperately sad with the absense of that joyful, wriggling lump of "Welcome home Sarah Toa! I'm so happy you are back! When we going fishing?" 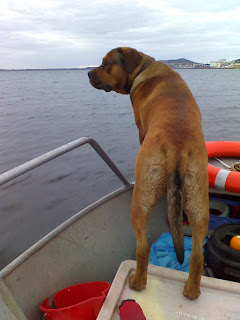 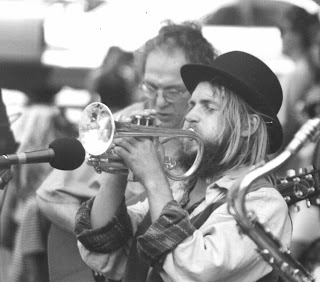 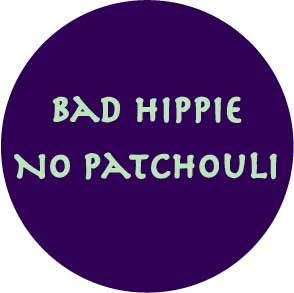 Mr Yin's patchouli always precedes his elegant arrival. His wife buys it, he tells me. He doesn't know where from, but I can tell it is the real thing. There is such a thing as 'wrong patchouli'. Sometimes, whether the manufacturers have dodgeyed the mix or the plant herself is having a bad week, a bottle of patchouli can be a bit wrong. But when patchouli sings, it sings the essence of warm and sensual beings, of lightness in spirit and journeys into the deep, musty secrets of the earth.

I've followed women around in supermarkets with my nose, sniffing out wandering trails of heavenly scent, usually to find an old friend, dressed in Gypsy Rose market gear in the shampoo section, puzzling over the 'natural' ingredients that swim in sodium laureath sulphate and plastic. I met a Sanyassin man once in my dizzy youth, who was short and giggling and wore purple pants. It was not his pants, or the relentless laughing or the exotic beckoning of other worlds and spiritualities that suckered me. He was drenched in patchouli and I just wanted to have babies with him because he smelled so damn good.

"We had to watch a rat dissection, in year ten science," a staunch vegetarian told me, "And the girl sitting next to me was wearing patchouli. The smell makes me want to vomit to this day."
In my year ten, no one had heard of patchouli. Three dollar aerosol cans of Impulse were the scent scene. This nasty epitome of the utter lack of earthy inspiration that was the 1980's combined nicely with Madonna, George Michael, Spandau Ballet, Duran Duran ... I had problems during high school. For some reason, I just didn't fit in.

A conversation in a cafe:
"What perfume are you wearing?"
"Patchouli."
And his eyes went on a quiet little journey into past love affairs. When he finally returned, he told me, "I used to know a girl who wore patchouli."
A few weeks later, I noticed his wife smelt ... rather good. "Yes, ---- bought it for me! He wanted me to wear patchouli."
No, I did not say a word, just put it in my little story bank and left it there.

On friday I sent away a 23,000 word thesis - I willingly bared my throat to the examiners. Now I wait ... and wait ... it is two weeks until I find out whether they deem me worthy/unworthy of further work.

It's all about history and fiction, how historico-fiction can tell the unspoken tales of those silent voices of the past. So of course, two days after I hand in the thesis, I read in today's paper; "The historian remains irrevocably tied to concrete evidence, which is patchy at best and never allows access to the human psyche." Cassandra Pybus.

This Cassandra (whom I kinda admire) goes on to outline how of the most intriguing of stories in history are best served by historico-fiction, and why.
Well. No silly bugger at Troy paid any attention to Cassandra. Maybe this Cassandra could have prophetised she was writing an article that I could have quoted. Hey, I would have listened to the girl. Anyway. Methinks that is just the way of theses and the way Muphry works when we are feeling so bloody self important. I can safely wager that I will find a dozen 'perfect quotes' within the next fourteen nights.

I'm positive Leonard Cohen and the Pogues can see me through this.
Posted by sarah toa at 6:55 PM 7 comments: