Stuff, things and the universe


This is Paul. He’s the Tip Shop Guy. 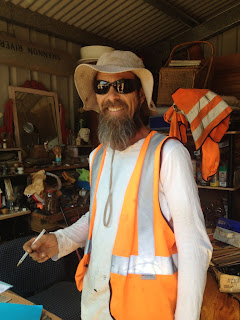 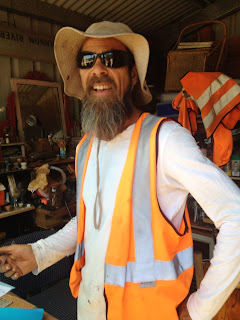 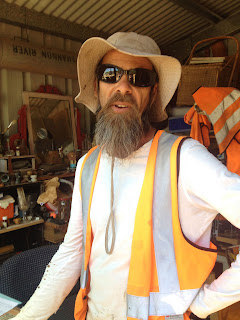 Paul is not just a council worker though. He is a keen gardener and consummate artist.
“I try to set things up so that wherever you are, the more you can see,” he says of his garden.
“Yeah, it’s that kind of a garden. Can you tell me about your pine forest here?”
He looks at me. “The Christmas trees?”
“Yeah.” 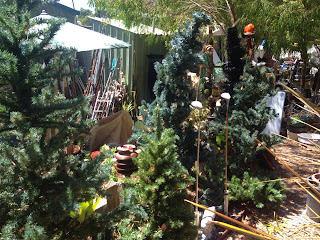 “Well, they’re everlastings. Don’t need any water.”
“They’re evergreens, I guess.”
“Well I prefer 'everlasting' myself. Instant green, instant screen.”
“Do you ever get people come and chop them down at Christmas time?”
“No. What usually happens is that in the month before Christmas everyone brings in their old crappy ones to throw out. No one ever buys a Christmas tree from the tip. They never get a pram and they never get a Christmas tree. I dunno why. So I’ve always had Christmas trees and as we speak, I have another two, waiting to go into the garden.”
“Awesome.”
“I don’t really want to hedge them all in this zone, so I’m thinking about a hedgerow over the back there.”
“Can we go over there?”
“Sure. I make this bit all weird, to slow the punters down from coming into the back zone.”
“Yes … “ I’m climbing over flimsy plastic pallets at this point. “It works, it’s a bit tricky … oh, a golf club garden!”

“Well it’s more like some strange creature with spiky hair.”
“Oh. Yes. This is hard terrain.”
“He got blown over in a storm. I haven’t rearranged the spikes correctly yet.”
We stagger past a woolly thing that I realise is a sheep.
"That was a sheep, yes?"
"Yes."

“See all the community now, from wide and far, they bring me unusual things that have something wrong with them, and they say ‘Here’s something for your garden Paul’, so it’s kinda developing into an obscure … not gnomesville really, but an eclectic collection of … things.”

Paul is Wombling overland and Wombling free in his garden now.
I say, “But they’re not just things are they? What about your collection of propellers here?” 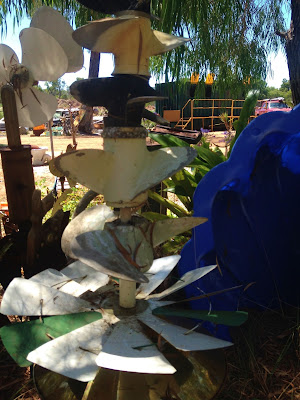 “Ahh, I like the the three pronged shape, and the way they’re set up as a spiral reminds me of some of the fractals, so when I look at three, I see the propeller blades and fans but I can also see glimpses of, of like everything.”
“The universe?”
“Well, it’s like, it shows how connected we are, because on a subconscious level we use all the tools the universe uses to make all our stuff. But from a waste point of view, you see the destructive side of how we take all our resources and make it into stuff that has to be chucked away. What I’m trying to do is say ‘Look, forget about that you think is rubbish and think outside the box. Look at it as a building block. You can make amazing things out of stuff if you use your imagination’. And that’s pretty well what nature does, I reckon.”
“Nature uses its imagination to make stuff?”
“Well yeah. It’s just like there are all the building blocks of life and how they come together really dictate how things evolve. And that’s also how this garden happened.”
“A harmonious balance.”
“Yeah, well see like this little bit here. This was supposed to be a curve to finish off this garden, so I’ve got these things here and all these posts to do the same thing as this, sort of tapering down in a curve … but for some reason, I just chucked them down and now they’ve been here for nearly two years. It’s almost like the random chaos theory brought back into life.”

I look doubtfully at the mess of copper log ends strewn at my feet.

“D’you know what I mean?” Paul asked, “It’s a delicate balance of chaos and order …”
“Mm. So what’s going on over here?” 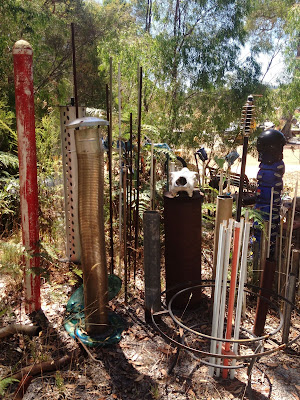 “Oh, I really don’t know. But I do like to watch this space, so I put a couple of watches in here.”
He pointed out the fucked Casios perched atop their silver plinths. “You need to watch this space. It’s just a representation of time and texture.”
“How about your mop garden?”
“You know, they’re crappy old mops.”
“They’re the ones that everyone chucks out, hey?”
“Yeah. If you stand them up like that, when I first stood them up, it was a forty degree day and while we were here, two of them opened out. Well, that'll be the mops opening.”
“They look like they’re chatting.” 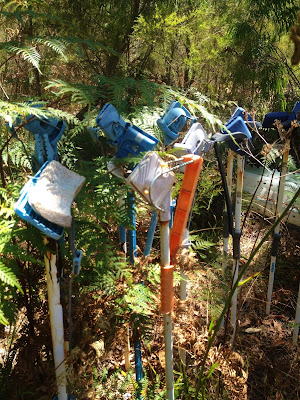 “Well they are, and they’re also a barrier to the wheel garden.”
Beneath the mops were circular beds of … wheels. “Everyone’s gotta have a wheel garden. To keep it wheel.”
“Keepin’ it wheel. Cool.”
“Yep.”

“I was really intrigued by your tulips. How do you get such wonderful tulips growing in the middle of summer?”
“They’re fake.”
“Oh, you shouldn’t say that.”
“Well they are.”
“You’ve gotta come up with some amazing theory here, Paul.”
“Nah.”

I worried at this point, because I’d had a lot invested in the interview when it came to Paul’s tulip garden, but then he rallied. “Oh, yeah. Well they’re like the fans and the propellers. It’s probably because they’re growing in the canoeing helmets from the Outward Bound mob. Think about all that collective conscious energy going in to make some plastic fantastic thing grow … I’m making this up as I go … but at least it rhymes.” 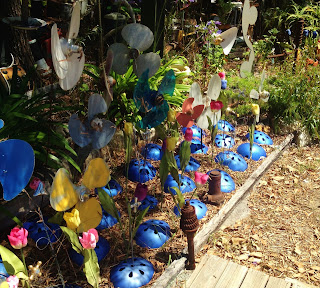 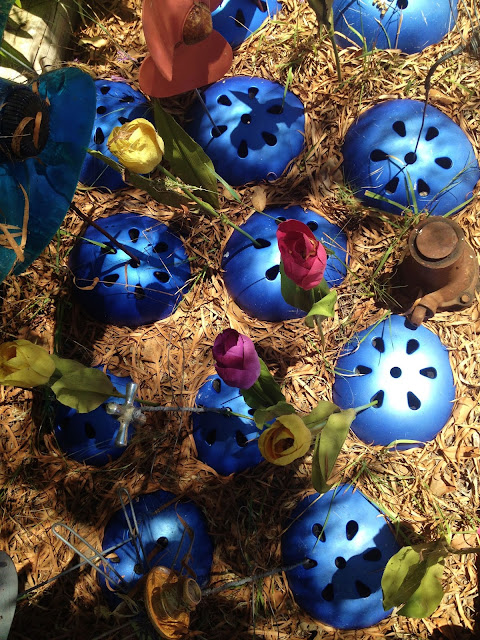 We stopped in front of the saw garden.
“This is my saw garden,” said Paul. “Well, it’s saw grass really.”
“With a toucan.” 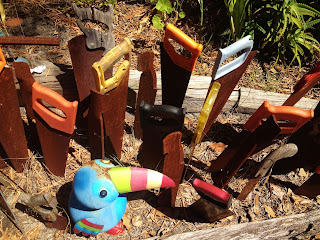 “Yeah, well you know, with all good grasses, something always wants to make a burrow in there. It’s evolving. Just like I’ve got power points in the garden, ready to be plugged in, just in case anyone feels like they need to do some work.”
“Not today.”
“Nah.”
“No.”
“So you know, I just like to have fun.”

“I like the chainsaw.”
The chainsaw hangs from a peppermint tree and is balanced with a bird feeder, complete with a rather unhappy-looking plastic budgie.
“Yeah, the chainsaw was turned into a bird feeder.”
“Which is apt.”
I stared at Paul.
“Of course.” 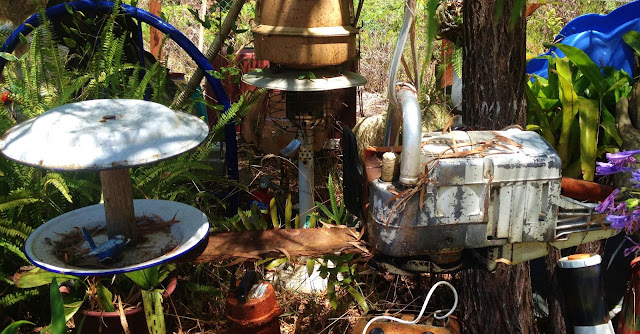 “Yes. The reason I put this all together was one, out of boredom and because I like to make things, but essentially two, when I first took over here, everyone would come in with a big trailer full of rubbish, unsorted, you know.”
"You've got a good eye." 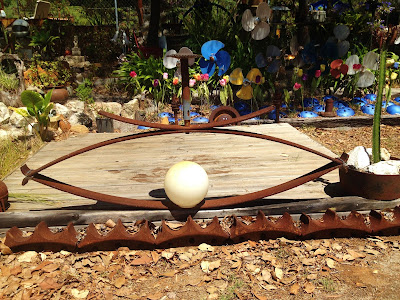 He sighs a tip-sorter’s sigh.
“It’s about educating people into re-using things. But also at the same time I was setting up a salvage shop. The main thing is to stop things going into the ground unless it absolutely has to.” 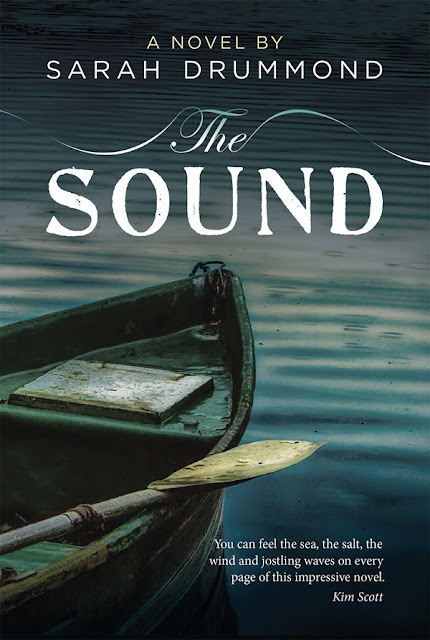 Wow, things are moving fast now. That book with my name on it, now titled The Sound, has winged its way across the world to be printed. It no longer belongs to me; it belongs to whoever chooses to pick it up, I guess. A strange feeling, it is ...
So now, my attention turns to making the minor changes to the PhD thesis so it can be passed by the uni next month, and then that's it too. What a trip.

Hey, here is my graduation statement:

Sarah Drummond’s thesis ‘Exiles and Island Wives: history, fiction and the Breaksea Islanders’, explores the lives of a community of sealers who lived on Breaksea Island, King George Sound, in 1826. The thesis uses fiction, and historical biographies and discussions to examine the community’s interior lives and the external conditions that contributed to a series of violent events, just prior to the colonisation of Western Australia.

The novel, published by Fremantle Press in 2016 as The Sound was described by examiners as possessing an “elegant architecture, the harmonious arrangement of fact and fiction,” “epic in scope”, and that the main force of the novel lay with “the clever and forceful way the candidate presents the ever present violence”. The general thesis writing was said “to be of an exceptional quality” and that “fiction and nonfiction are married here with consummate skill and Sarah has created in the end something much bigger than either component could hope to achieve on its own.”
Posted by sarah toa at 2:48 PM 16 comments: