The Hunter returns from the forest to his home. It's been an unsuccessful day and he is tired, hungry and foot worn. But as he rounds the last bend and sees his house, all of his senses become alert again, like the act of hunting itself. A thin line of blue smoke curls from the chimney.

He should return to a cold, empty house. He should have to collect twigs, chop firewood before resting his weary carcass ... but there it is, smoke curling from the chimney, beckoning like a finger. In side the house he feels warm and something else. He smells meat cooking and the house feels inhabited. Someone has been here or someone is still here and that is a good feeling, this new feeling of being cared for.

Every day for a week it is the same. He returns on the dusk to a warm house with food awaiting him. He never sees her. He knows in his water it is a her. Like any hunter he uses all of his senses to divine the presence of another. On the seventh day he returns to the house earlier than usual.

She is at the fire place, tending a bubbling pot of what smells like hearty stew. She has her back to him and a wild, dream tangle of red hair spills down her spine. She, like all women, knows when she is being watched. She turns, the wooden spoon still in her hand and dripping at the feet. 'I will be the woman of the house now,' she says.

All the smitten Hunter can do is agree. They stand facing each other, appraising, reckoning, loving and longing. How long has she been watching me? thinks the Hunter as they fall into a bed of deer pelts. He thinks he may be dreaming into her hair, her soft skin, when she says, 'There is one condition.'

Of course he knows she is a Fox Woman and of course when she points to the fox pelt hanging inside the door and says 'This pelt shall always hang there, for as long as I am here,' he knows she is serious.

The honeymoon lasts six months, as all good honeymoons do. He brings home rabbits and deer and boar. She lights the fire and cooks for his return. At night they feast on each other's bodies, bringing each other home, again and again.

The pelt begins to smell, as all fox pelts do. It is a furtive, underground scent at first. The Fox Woman doesn't notice it. As the fox pelt's stench becomes more akin to a feral violence, the Hunter has to bring up the issue.

'I get it, I know you need your pelt dear ... and look, it's no reflection on you at all, but do you think we could put it outside, maybe even out in the forest. It will still be safe there.'

The Fox Wife stares at him and shakes her head. She puts his mistake down to inexperience and lets it go. But three months later and the fox pelt is smelling worse than ever. The smell gets into the Hunter's food, his hair, his mind. He is going mad with it and he toys with its destruction in his mind. 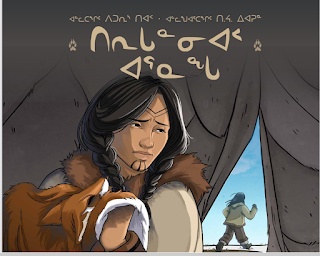 One night he is drinking by the fire. She sits in the easy chair beside him. Her obstinacy over the fox pelt strikes strikes him as a challenge to his authority. 'I told you!' he shouts. He slams his hand hard on the arm rest, right next to her hand. 'I told you, you stubborn woman. That pelt has to go. Get rid of it.'

Without a word, the Fox Woman takes her pelt down from where it hung, and leaves. She's not there the next day when the Hunter turns the corner to see his house where no blue smoke curls from the chimney. The man, tired from tumult, ached in his body, felt in his whole body the yearning for the Fox Woman's scent. 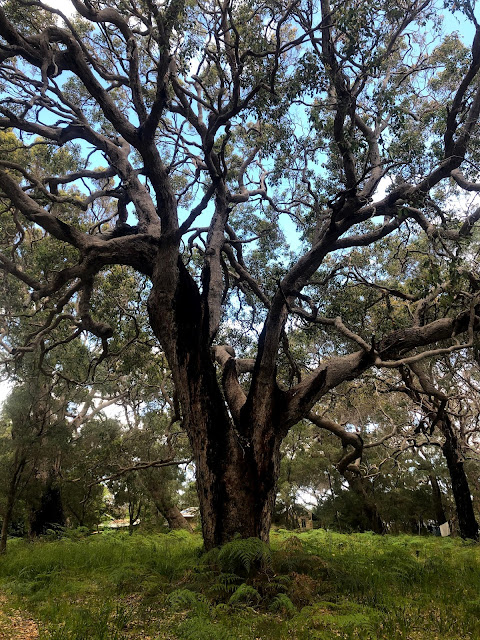 This is my favourite tree today. She lives on my driveway. Eucalyptus camaldulensis, I think. Marri in Noongar. You can see the stains where she bled resin last summer, much more than normal in my five or so years here and my theory why is that the summer was so hot.

Red gum resin is a stomach calmative and this tree served me well when I ate the wrong mushrooms that time. You can see the roof of my cottage in the background. This crazy dancing lady has been around and helping people with their upset stomachs for several hundred years. 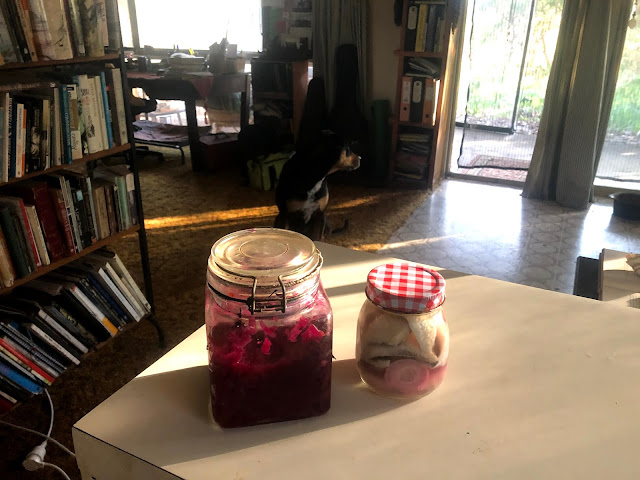 They may look ordinary but these two jars contain things that are really fucking yummy. For the first time ever I made sauerkraut (on the left). Look I'm no lifestyle blogger but making this stuff out a mere red cabbage and some salt, watching it spill out of its jars and then eating it a week later, is well, transcending. Pounding to pieces a whole cabbage in a cast iron pot to make a gut health panacea, whilst thinking of all the politicians I can't stand was an illuminating experience.

On the right is a jar of pickled yellow eye mullet. Again, a preserve virgin when it comes to mullet. I've smoked them, fired them, fried them but never ever pickled a mullet. We'll wait and see. Every year I pickle heaps of herring into rollmops, so it will be an adventure taste test with the mullet. I pickled them because a commercial fisherman turned up from the boat ramp a few days ago as I was heading into work. He had a huge bag of mullet 'and one herring with its head bitten off that I thought you'd like Sarah', to pay me back from when I helped him out with a flat tyre. 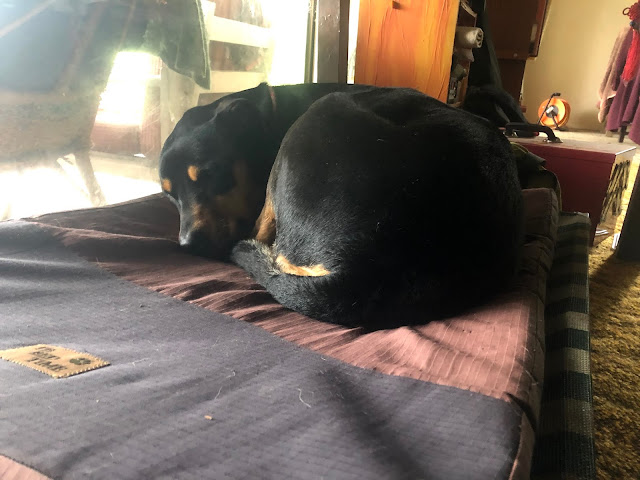 This is a photo of my dog Selkie 24 hours after she took a 1080 bait from down on the beach. She's still sick here. She'd just had her stomach pumped twice - once with water and then with charcoal. Then she was on a drip over night. Having survived, she gave me a rather smelly hug, being covered in her own shit. I think even she was embarrassed.

They bait everywhere here for foxes, cats and feral pigs. It's a pretty full on thing to live with if you have a dog, that sense of vulnerability. Being surrounded in national parks is beautiful most of the time until this kinda thing happens.

After two days and a shower with me (it was too cold to wash her in the inlet) her coat and eyes glossed up again. The night at the inlet without her, while she was on the drip 100 kms away, was really strange. I just got drunk, thinking about what it would be like to live without her. 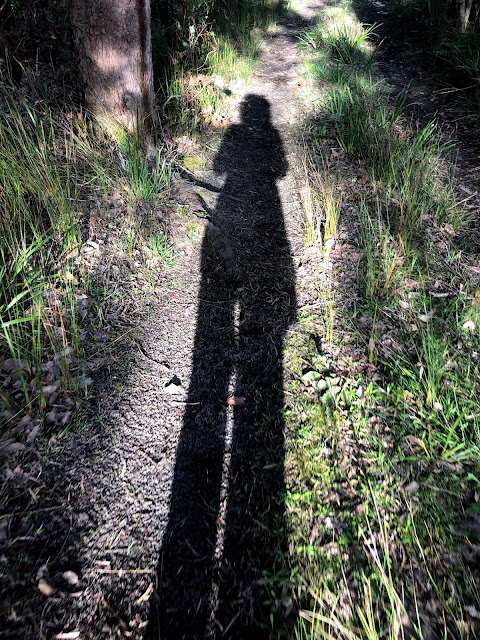 The bottom track and me. 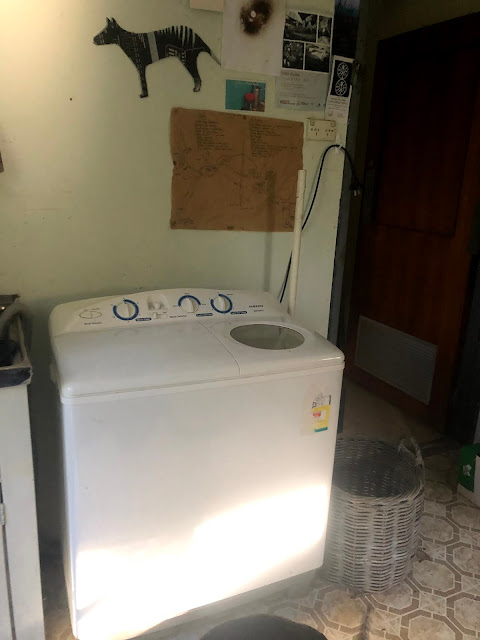 My new washing machine. Actually this is the first time I've had a washing machine! I'm finally in the electricity economy after five years off grid. Terribly exciting to do a load of washing in a fifty dollar twin tub. Whoo! 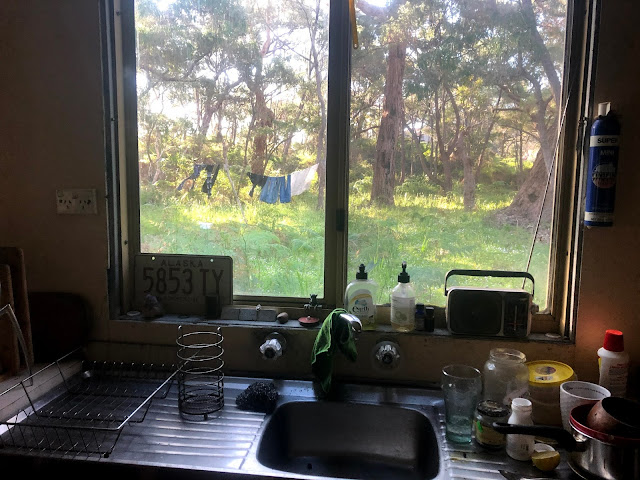 View of my clothesline. I told y'all this was domestic affairs.

Encounter with a pig

Bushwoman came out of the supermarket, carrying a beer box full of vegetables, honey and bones. She looked across the street and saw the Schoolteacher, filling the back of her car with much of the same, maybe some extra boxes of wine.

'Oh, very well,' answered the Schoolteacher, ' and now I must inspect this pig.' She pointed to a car towing a trailer that housed an enormous pig.

'I think I should join you,' said the Bushwoman and and after the Schoolteacher had rested her shopping trolley safely against the back of her car, they walked arm in arm along the middle of the deserted main street, to see the pig.

As they approached the trailered pig, the Driver tried starting the car. Arump arump arump. The man in the passenger side got out carrying a hammer. ''Ha!' said the Schoolteacher. 'You thought you'd escape us!'

'Give that starter motor a good thump,' said the Driver, and tried turning it over again. The Passenger gave up but by then the Bushwoman and the Schoolteacher were all staring at the biggest Sow they'd ever seen.

'Isn't she the biggest pig you've ever seen?' said the Schoolteacher. And indeed she was. Pink, fat, with udders that swayed. The Sow nosed at a Chinese takeaway box that the Driver slid into the cage. She sniffed at the vanilla slice and then turned back to the Bushwoman and the Schoolteacher, pressing her snout against the wire, inspecting them.

Bushwoman had seen whales do the same thing, search for an ally.

'Her name is Deloria,' said the Driver defensively, as a crowd began to gather.

'She'd make for great chops,' said the Kid. The Bushwoman hadn't seen him for three years. The Kid was taken away from his parents and now he's returned. He's stretched a foot or two since then. He's standing there all tall, blonde and upright. He wants to be a butcher, he told the Bushwoman.

The local Yogi sat watching on the brick steps on the other side of the street, near the pharmacy, natural endorphins shaking his head.

The Driver slid the Chinese takeaway container under the cage and ate the vanilla slice. 'She's our prize pig!' he said. 'Give that starter another thump!'

And the motor went arumph arumph. 'Okay, let's hit the road,' the driver said as the car chocked into life.

Bushwoman, Schoolteacher and The Kid waved goodbye to the pig and her chauffeurs as they ambled to the highway.