Hyphae and the Tree

Above, trees embroidered the sky, crown shy, jacquard patterns of light between their canopies as they politely gave each other space. Rambunctious cockatoos flung honky nuts onto the tin roof and a tiny black snake basked on warm granite. Like the sea’s opaque skin, what lies beneath is concealed from our eyes. Below, beneath the messy, decay-scented litter, beneath the house, the track, the car, the snake, beneath our boots, lies the world of mycelium.

It seems trees are not that into Darwin’s theory survival of the fittest. Instead they nurture each other in order to create strong, diverse communities. We could call trees socialists, at the risk of anthropomorphising plants, to force them akin to ourselves in order to divine their inner, secret lives.  ‘Mother’ trees suckle their young by feeding plant sugars to the roots for up to a decade. Trees can feel and express pain. They live in families, communities, where they support sick neighbours, make decisions and fight off predators. They do these things in Tree Time, a different scale of time to us; ponderously, they speak slowly and inevitably to truth.

Sentient beings are capable of perceiving events, of signalling to others and responding to them, and this is an argument for the sentience of the tree … sensation, awareness, information processing, memory, adaptive learning and finally, intercommunication. But to achieve these things, to express pain, to succour an unwell friend or alert the community to predators, there must be a way of speaking.

Silvery strands of mycelium thread through the forest humus, underground, clot together and fall away into singular lines of hyphae. Mycelium furls around the root tips of trees, passes sugar and gossip to a neighbour tree and the next and the next. From tree to tree, hyphae pass resources and information. A tree under insect siege sends electrical ‘data’ through mycelium to its neighbours, so they can produce insecticide in time to defend themselves. In payment, the tree will feed the fungi (which, in being nourished by animate matter, is more animal than plant-like in its nature) nutrients gleaned from photosynthesis.

Visible renderings, the stories, are the fruiting bodies of one of the largest living organisms on earth. Fungi shoulder their way through leaves, wood, bitumen roads, yielding beds of sheoak needles or stoic brick paving. They push their soft white fists through the crust, silently, overnight. From subterranean webs of gossip, nurture and early warning systems, they force their way into the dappled light of a forest morn, newly born, perfect in form. They are the manifestations of hunger and battle and succour beneath us, the tangible stories we can see.
The armillarias killed the old marri down by the inlet shore in the winter. Armillaria mycelium is no friendly communicant for trees but its aggressor and will feed on the decaying carcass for decades. The thugs of the fungi kingdom. The mushrooms, beautiful sheaves of gold, perfect and succulent, climbed the craggy bark like marauders up the castle keep, relentless, until they cancered the ancient king.

We shall by morning
Inherit the earth,
Our foot’s in the door.

Pink, frilly chantarelles grow in seams between stands of karri hazel and are yummy cooked up with garlic and butter. Hebalomas feed on bones. Coriolus flare on logs like a Spanish dancer’s skirts. Earth stars squat in leaf litter, little colonies of star critters.
Sometimes I feel closed into this forest country and yearn for an open sky, megalithic granite fronting an ocean, a horizon. There is my discomfort in not being able to see the Southern Cross at night for dark, feathery screens.

And yet, and yet. As I slept in the forest I dreamed of swimming inside my house, the same night a lost and found friend’s brain bled. I drove through the forest and heard the music, and was transported through the canopy to the hospital bedside of another friend. I don’t remember the intensity of these experiences on coastal heathland or sand dunes.

Fungi hunting through the emerald karri understory, wilding it down to the level of a honky nut, or a ball of kangaroo poo with a whole city of bugs and mushrooms aboard. The forest moves quickly through decay and rebirth. Underneath it all is the invisible chatter, the inter web of mycelium.


I follow footprints. Kangaroo prints, tyre prints, raven prints, people prints. This day I tracked a small child, toe marks pocked into the silt of a recently drained road gutter. The child had wandered into a scrubby driveway past the guardian tree and continued south towards the inlet. When I got to the tower she came out to meet me.

She was possibly seven years old. She had bright orange hair and carried a ringtail possum on her shoulder. Both of them stared at me with eyes glossy and dark. ‘Is your mother or father here?’ I asked. She looked at me with horror and turned away to the stairs, the possum’s white tail like an upturned query against her back. The door slammed shut in front of me before I realised I had failed the basic courtesy of introducing myself.

Making my own prints on the inlet shore, I waded into the dark water. When it reached my waist, I waited for the wake to settle, until the water mirrored my image. Was I really such a frightening sight? Of course, my red dress and lipstick, my wrinkles, my long black hair were reflected in the inky surface. The wind came up and shredded this image into streaks of red and darkness. I opened my mouth and saw my true teeth filed to sharp points. The glamour cloak of a friendly maid had failed when I did not utter my untrue name to the child. I turned, disappointed and saw the child watching me from the window of the tower.


I was in the tower when I saw him, standing seventeen feet below on the black sand beside a white Toyota. “Hello!” I called to him.
“Hello!” he said in a strange accent, maybe eastern European. “I am wondering if I can camp here? Not too close to your place of course?”
“It can be uncomfortable down there on the ground,” I said. “Would you like to stay with me in the tower?”
He shrugged and looked uneasy. “Perhaps not,” he said. “I will be away before dawn. I would like to sleep under the stars …” he looked around towards the copse of paperbark trees and seemed to make a decision. “Over there.”
“Suit yourself.” I was not miffed. Mine was not an inappropriate proposition but I was a little worried now. People often arrive here on personal odysseys or orchid hunts but they tend to be better prepared than this stranger. “Perhaps you could light a fire. I can get you some wood.”
“No, no, I don’t need a fire. I have a camp cooker.”

At dusk I went for a walk along the inlet shore, past his camp. The stranger had laid out his swag on the ground and he was nowhere to be seen. His shining coffee percolator sat atop a brand new camp stove. A price tag flicked from the swag. He’d obviously flown into the country and driven straight to the inlet. Nobody has told him. The ravens rustled their feathers, waiting for scraps. I went up the path lined with smooth white stones and grey succulents to the tower and, once inside, bolted the doors and windows.

He could have seen the stars from my tower window. There are no eaves and the largest window faces out to Orion’s Belt at this time of year. Anyway, the clouds gathered and I wondered if I had been clear enough with this first-time camper and his foolish independence.

I could have told him that in the hour before dawn the monster dogs would come to circle. I heard them snorting and growling. Quartz, the youngest dog, looks terrifying with his leonine form and slobbering jowls. But he is the gentlest, a bit stupid, and his growling indicate respiratory problems rather than aggression. It is the other two, the black Great Danes Onyx and Tektite, who employ Quartz for their deeds and work as a team for prey.

I watched from my tower window as the monster dogs loped through the gloom towards the copse of pale, fleshy paperbark trees, and the dark huddle of the man who slept there. A clatter in the night, as the percolator fell to the ground. The sound of canvas tearing. 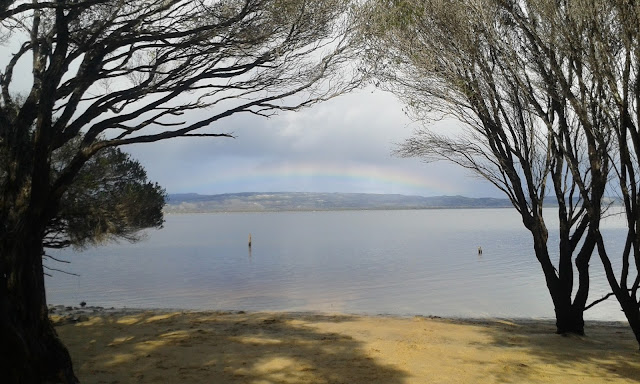