I would have had my car serviced last Friday but the mechanic's apprentice went down with food poisoning from a local ham and cheese croissant. His boss, my star mechanic, had gone north for the winter. I was driving with a starter motor I had to bash with a hammer, a rather ugly left headlight and a fuel filter full of filthy fuel, and my car was literally staggering the long drives into the city. Before you pedants go postal on the word 'literally', imagine driving at 100km an hour when the car suddenly loses acceleration. It feels like riding a galloper who breaks a tendon, mid stride.

Anyway, when I picked up the car, both the apprentice and the mechanic showed me the fuel and air filters and explained why these filters were entirely unsalvagable.
The air filter? "The summer Broke track."
The fuel filter? "Well, you've been buying some dirty diesel somewhere, kid." That's Stan, star mechanic and back from Quobba. He always calls me Kid.

I thanked them both and drove off and when I put my foot down the car accelerated onto Highway #1 like a motherfucker (even if it is a Ford, it still went like a mother).

By the Broke track the car was so amped with the good stuff  it nearly hit a wild pig that skittered onto my path. It's the first live one I've seen and it looked like such a happy piglet (it was probably quite freaked out) as it scampered in front of my car.
"Get off the track, little black pig,'" I sang as I drove through the karris. The pig careened off into the bush and I planted my foot, before sliding gracefully into the next clay gutter. 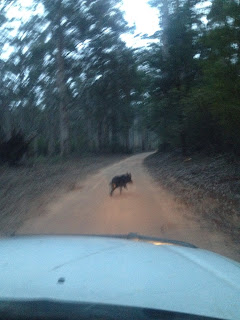