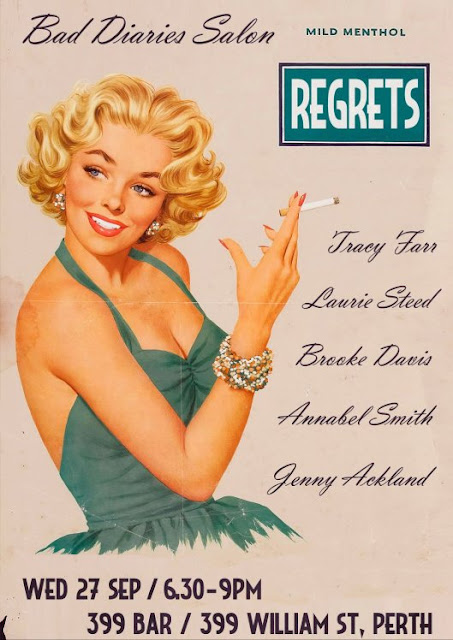 I preemptively regret not being able to make it to this great show!
Posted by sarah toa at 11:42 AM 3 comments:

I just love these tree critters. Now the sandbar has broken and all the water rushed out to sea, you can see how they get hammered during the rainy season. 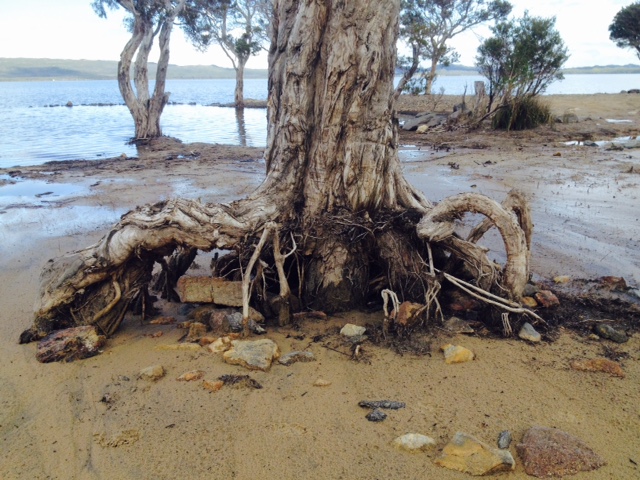 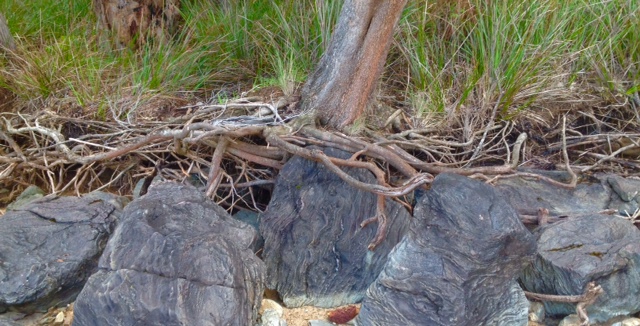 Letting the light come in


John Austin and I met at a forest festival in Northcliffe last year. He was sitting in the pop-up café. My first impression was of a man who observed his space in a quiet, intense but unobtrusive manner. I’ve known other professional photographers who have the same way about them. Witnesses, I guess, those people astute of eye and with a mind that constantly frames the scene. They are lens rather than subject. We talked about going into the forest that day. ‘I can’t go into the forest any more,’ he said quietly. ‘It just makes me too sad.’ *
On Friday John is showcasing the very best of his work over the last twenty three years and a major part of the exhibition is about the forest protests of the 1990s and early 2000s. 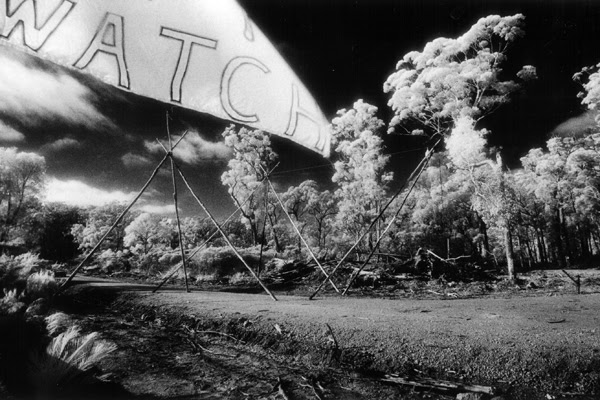 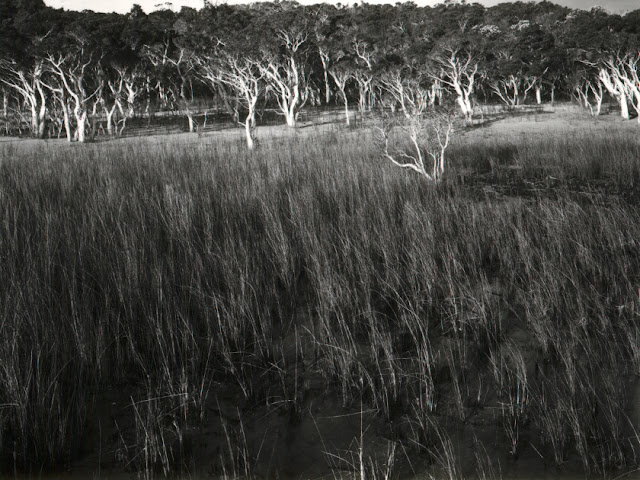 
John also photographs landscapes and portraits, and is particularly enamored with the littoral . He and his wife Rae came to stay at Broke Inlet while I was there a few months ago. In the early morning, I saw their figures stepping through reeds and around trees on the shore of the inlet. They'd been here many times before to photograph the place where water and land constantly renegotiate boundaries. 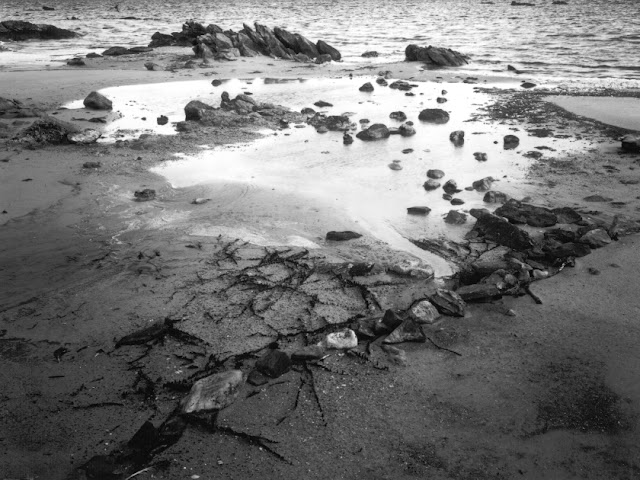 Broke Inlet Fishtrap
Later we had breakfast in Claire House and chatted. In 1994 John had decided to move down to the southern forests, to work in a more quiet and contemplative way. ‘But when I moved into the forest I found the truth.’ The battle to save the south west’s old growth forests from large scale logging wasn’t even on John’s radar until he moved to the tiny timber town of Quinninup. ‘There was nothing quiet and contemplative about it all,’ he said. ‘It was mayhem. It was like a battle scene.’* 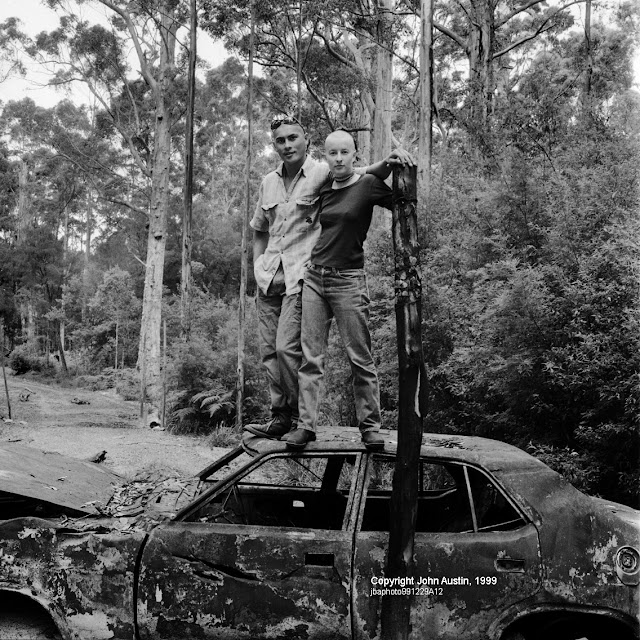 Tank Girl and her Mate 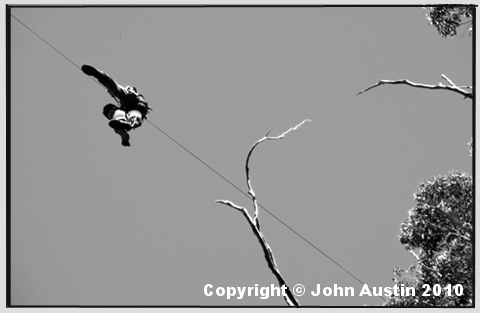 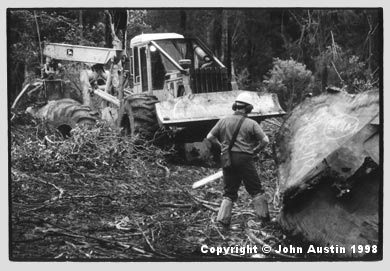 In the thick of it

John Austin's survey documents an integral part of our recent cultural clashes when it
comes to primary industry versus conservation in small towns of the south west. I would liken it in context to the work of photographer Ed Smidt in Albany, who documented another eco-cultural turning point in the 1970s: people protested the killing of another monolithic species -  the whales - while the industry's working class clung to 'the way things were' and the businessmen bailed when world's markets dropped out.

I'm really pleased and proud to be opening John Austin's exhibition this Friday at the Bunbury Regional Art Gallery.  After I met John and Rae at the cafe in Northcliffe, he read Salt Story and asked me to write the essay for his survey catalogue. He said he wanted something different to the usual art theory essay. I was happy to oblige and after many hours interviewing John with my phone and pen and paper at Broke Inlet, and later in his darkroom, we had an essay ready for the exhibition.

*Excerpts from 'Letting the Light Come In: John Austin's relationship to forest, woman and land's edge.' By me.
Posted by sarah toa at 5:16 PM 4 comments:

What will Country say about me when I'm gone?

What gossip would Country impart at a party, after us humans have walked out of the room? I've often wondered about this. Recently I visited the place where a friend took his own life and I can safely say that nature doesn't give a fuck. Nature doesn't remember or care much for us interlopers. Today, another writer told of how, after the US mortgage crisis, people walked away from their houses. The animals moved in and the backyard pools filled with reeds and frogs.

In this context, I love the quote from filmmaker Wim Wenders about landscape photography. It is paradoxical and yet weirdly correct.

I am not a landscape photographer. I am interested in people. I am interested in our civilisation. I am interested in what traces we leave in landscapes, in cities and places. But I wait until people have gone, until they are out of the shot. So the place can start talking about us. Places are so much more able to evoke people when people are out. As soon as there is one person in the shot everybody looks at that person. If there is nobody in the shot, the beholder is able to listen to the story of that place. And that’s my job. I try to make places tell their stories about us. So I am not a landscape photographer. I am really interested in people, but my way of finding out things about people is that I do photos about their absence, about their traces.

This is so lovely. Thanks to a friend's recommend.
Posted by sarah toa at 4:56 PM 1 comment:

Mum and the motherless nest

Mum found a bird's nest while walking in the forest recently. 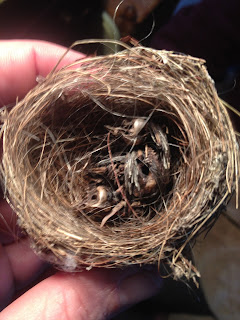 She got her magnifying glass, held it under my eyes, and said, 'Look a bit closer.' 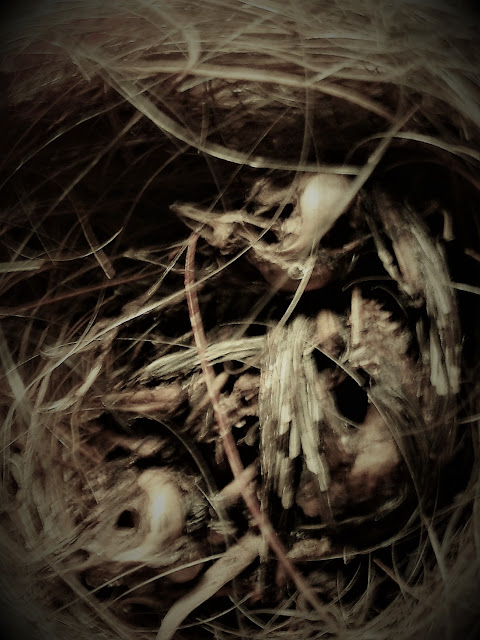 Mum spent her working life in midwifery and palliative care, so she is across the minutiae of birth, death and rebirth. This one stumped her.
'What happened?' she asked me, as we stared at the tiny skeletal chicks no bigger than my thumbnail.
Posted by sarah toa at 6:29 PM 4 comments: