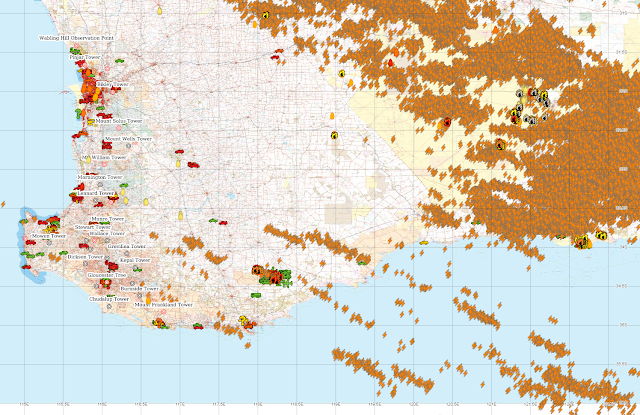 These maps are cool. You can go to https://myfirewatch.landgate.wa.gov.au/ and click on lightning strikes in the last 24 hours. Satellite data gives you the exact location of strikes. So, the map above shows two day old lightning strikes in orange. That was Friday night and it was a massive system stretching from the Nullabor Plain and up to the Pilbara. The map below shows the 'hotspots' or fires the lightning left in its wake. 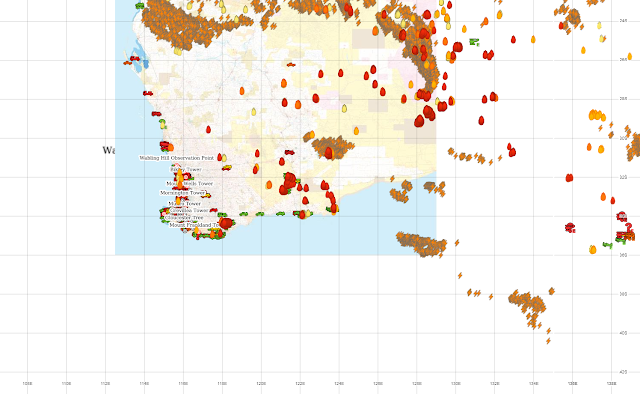 Before work yesterday morning, sitting on a leaf-strewn veranda, I could hear rustles in the undergrowth. Selkie was inside as I sipped at my coffee. It was a quail, scratching around for bugs. They are very shy and the only time I see them is when the hound flushes them out. So this sighting was a treat. I sat very still and the ... oh my heart ... three tawny chicks followed her, all in a line like ducklings. She was teaching them how to forage.
Posted by sarah toa at 2:18 PM 6 comments:


Now I would like to write about my favourite things, books.
With a kind of bizarre secrecy from the Prime Minister's Office regarding the whereabouts of our national leader (apparently mainstream media also agreed not to broadcast his holiday intentions), I'm going back to books. Good books are dependable, like bushfires in this country. Books are revelatory, like the acts of politicians under criticism. Books hold a mirror to our society, *crickets* from our leaders. You may think that to conflate a post about a best reads list of 2019 with our ongoing bushfire emergency is a lazy grab for attention. It's not. It's related, because good books conjoin humanity with literature. It's like coitus, right? Literature gets together with humanity and before they know it, oh my god, humanity is pregnant.

Ok, so the humanity/literature babbies for 2019 are: 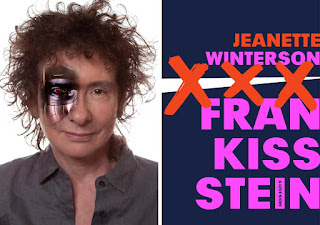 Frankissstein by Jeanette Winterson.
This lady has never minded ruffling feathers. She builds a world in Frankisstein where others are building worlds, whether it be sex-bots which (which or who? crucial question here) malfunction during a sex-con gone wrong. A scientist is trying to create AI body parts, wants to upload his brain while still alive and a transsexual doctor is mistakenly inducted into said scientist's trans human project "because people often get this trans thing wrong". It's brilliant and scopes all the things we are terrified of when it comes to AI and the building of humans. Mary Shelley would be proud.

The Overstory by Richard Powers.
This great big, baggy American novel is the read of the year for me. Three years ago, I discovered the wild wonder of mycelium in the world's forests. Now we have The Overstory. I keep pressing it on people, even though I know the worst thing you can do for a book is to say 'you HAVE to read this!' Yes, it's book death. But everyone has to read this book. It's about the fight to save America's great redwoods, the protests involved, the people who lived in the tallest tree in the world for ten months, trying to save it. It's about communication between trees, about arboreal interdependence and inter generational immigrants. Shortlisted for the Booker. Just fucking read it.

Vida by Marge Piercy.
Years ago, I used to read a lot of Marge Piercy. Woman on the Edge of Time, and other titles. I read Vida while I was on standby for fire duty recently. Piercy published Vida in 1980 and the eponymous protagonist was an (often violent) activist against the Vietnam War and later the anti-nuclear dissent. Vida is on the move as a fugitive the whole way through the novel, marked after trying to bomb the Mobil base. The novel is infused with the sexual politics of the late sixties, early seventies as people grapple with open relationships, covert affairs, bisexual tendencies and the latent desire to bomb places whose politics they detest. The book ties in with a lot of things in Richard Power's book; the exhaustion of fighting for years against an apparatus as large as the state, and common people feeling betrayed by their nation's leaders. See my first paragraph here ... 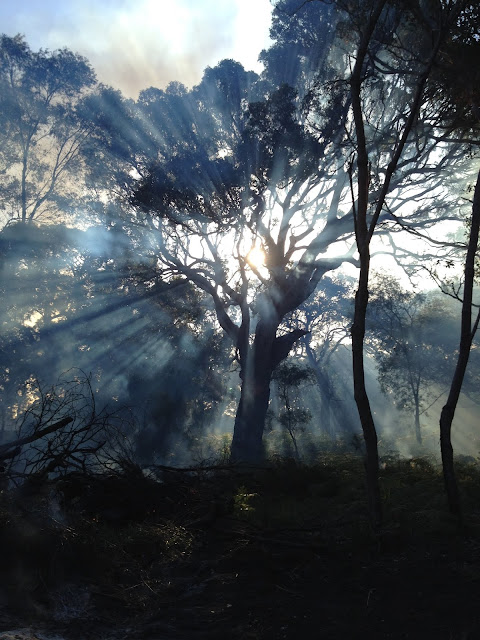 Already too hot in the morning after the strange fog lifted. It’s smoky too, from yesterday’s burn to the north. Paper wasps hover on the veranda, searching for nest potentials. A ground frog whooped like an owl and the sun hit the sand bar out in the inlet, gleaming white.
‘We’re holding fast,’ someone wrote on twitter, ‘It’s stay and defend now. Fire trucks everywhere.' Someone else tweeted that the pharmacy was bringing them asthma inhalers by boat, up the river. At least there is still a river left and not a fire break of hot, dead sand.

The dog with the orange eyebrows crawls under my bed to get away from the flies. It’s like every bug in the world has hatched out today. Tiny black beetles crawl over my bare skin. Insecticide and smoking mosquito coils seem to attract them. Birds call alarm.

I wonder how, when the first thing to go down here during an emergency are the phone lines and internet, people still seem to post and read twitter updates. Perhaps over east, their towers are powered by something more sophisticated than the grid.

My car is covered in fine ash from the northern burn. By lunch, it’s thirty-four degrees and we’re all twitchy with it. I’m on standby in case they need help with radio comms. Snakes cross the track, thin rivers of hot, black oil. An ecologist posts about the country where he’s tracked dingos, foxes, quolls. ‘The creek used to have little endemic crayfish in it …#bushfire’

‘Have you tried turning Australia off and then on again?’

A kookaburra catches a tiny snake, maybe a baby tiger and returns to its roost in the peppermint tree out of sight. I can hear it bashing the snake on the tree branch. Still, drowsy air.

The Moby Dick account: ‘A sage ejaculation.’ Someone posts about the smoke lying over Sydney for weeks now. ‘Fog horns for the ferries on Sydney Harbour.’ Others debate the correct kinds of face mask to wear. Now is not the time to talk about climate change, we are told by our leaders. Our man in Madrid is standing tight with Brazil to maintain our current emissions, stalling the world climate talks. The prime minister goes on holiday to Hawaii and there’s a flurry of tweets to Hawaiian journalists to find him. Seven hundred and forty houses destroyed … so far. Three people dead, but ‘They were probably Greens voters.’ Fire fighters crowd fund for supplies.

Last week the fires began in earnest in the west and some of our ground crew were sent to help out. They worked for days out east, came home and then headed straight for the blaze north of Perth. I ran over a snake at the beginning of August when it should have been underground. ‘We’re okay,’ the twitter hold-faster posted. ‘I just want to curl up and have a good cry now.’ Prayer emojis.

The Moby Dick account: ‘Thou canst consume, but I can then be ashes.’
Posted by sarah toa at 3:23 PM 10 comments: