The day my mother was born

Stormboy turned sixteen the other day.
"God, he's so handsome," Aussie said when I showed her the photograph of him leaning over a flaming birthday cake. (I'd bent sparklers into the shape of sixteen and the icing was covered in sooty, sulfuric ash after the mini bonfire.)
"Sixteen years! Sarah, what happened?" 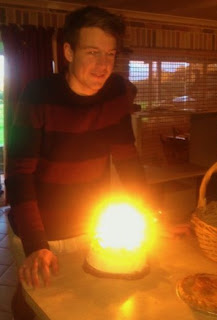 After the birthday cake debacle, Mum said, "Your Nan Sarah, she always used to tell the story of my birth on my birthday. So, Stormboy ..."
Stormboy started to look really uncomfortable because his girlfriend was in the room. Then my Mum put the wicker basket on her head; the one she'd used to carry Stormboy's birthday cake, the card with two ten dollar notes stashed inside and the fruit pie she'd baked for him.

She can be a bit fruity, my Mum, in a good way. Stormboy's girlfriend, his Dad and me all stared at her wondering what was coming next.
"A lady on a bus put this on my head when I was eighteen months old," she said. "We were on our way home from the market and there was an air raid. The bus driver, he started heading for the footpath because that is what they did - try and get the bus against a wall rather than be exposed on the road - but he couldn't get onto the footpath for some reason so we were out there in the open and there were bombs dropping and the lady sitting behind me tipped the shopping out of her basket and reached over and put her basket on my head."
Mum sat there with the basket on her head.
"That basket?" I asked, thinking of the baskets I'd left in the garden which had rotted within six months.
"Oh no, no!" She laughed. "But it was just like this one." She took it off and looked at it. "I don't know what good it would have done, if we'd been hit."

When I got home from Stormboy's Dad's house, I related this story to my sister. She said, "Has Mum ever told you what happened the day she was born?"
"No. She said she was born during the Blitz ... but didn't that happen a year or so later?"
"Yeah. But Bournemouth was bombed in retaliation for some German resort town bombing the day she was born. You have to hear Mum tell the story."
"Okay. I'll ask Mum."
We were quiet for a moment in the evening garden. Then I said, "No, fuck it. Tell me now. Tell me the story."

She was a breech birth. The labour went on for way too long and the midwife was starting to freak out. Then the air raid sirens started. As the neighbouring folk around her rushed to the shelters, my Nan decided she was staying put. Perhaps she was at the stage where she couldn't walk. Maybe the idea of giving birth in front of hundreds of people crammed into an air raid shelter didn't appeal to her. Anyway she stayed with the midwife in the second storey of her home, in a row of townhouses.

My Mum was hooked out of my Nan bum first, as the Luftwaffe bombs began to fall. The buildings attached to each side of Nan's home were completely destroyed, leaving a single dwelling standing like a new tooth, with two women and a brand new baby inside.

My sister paused then and said, "It's a wonder that we are even here."

I've never experienced a war. I've never had my house bombed or my children taken away from me. As a single woman I've been allowed to vote, keep my children and own my own land. I've had two parents who have loved and nurtured me into adulthood, who gave me ponies and freedom to roam the coast hills at my whim. At times I've whined about their reticence to send me to uni in an era when there were free degrees, or how they got divorced once, or made me work like a bastard when I was a kid. I railed against their staid 1950's morality and vowed to follow a new path in my own life.

Mum perched on the bar stool with a basket on her head, grinning.
"So, Stormie. The story of your birth ..."
I looked around the room. There was Stormboy, his Grandma, his Dad and me. They were all in the car that night.

I've revelled in the arrogance of birthing: a kind of existential joy in pulling rank,
but as we hurtled towards the hospital in a clapped out Combi and passed some random on a bicycle, I was whingeing like a bitch and weeping in the back seat.

As we got closer to the roundaboat, I cried "She's crowning! Stop. Stop!"
She inside my belly was of course a 'she' because we'd not birthed a boy since 1944.

Stormboy's Dad was driving. He'd just ripped over all the speed humps on the main street.
(Ba Doosh! Try a speed hump in a Combi when you are bearing down. Oh! And another one. Ba doosh!)
When I said I was crowning, he protested from the driver's seat,
"But Sarah, I'm on a roundabout. Can't stop now."
The streetlights blinked out.
"Darling. Just. Fucking. Stop."

Mum caught Stormboy as the cyclist passed the van.
I pulled a slimy, shocked and silent Stormboy to my breast and watched the cyclist heading up Campbell road. You know, I felt stronger at that moment than I've ever felt in my life. It was a dark moon that night and the inside of the Combi was so, so black. I felt the cool baby floundering and pressed him to my tit. Mum and Stormboy's Dad scrambled for blankets and the torch. Mum found it on the floor of the car and shone it into my newborn son's face. That Stormboy, he took a deep breath and started yelling.
Boy, they said to me. It's a boy. And we drove with me shuddering with body shock to the hospital, passing that cyclist as he/she struggled up the hill.

Lucky, lucky, we are so lucky.