The testimony of William Hook 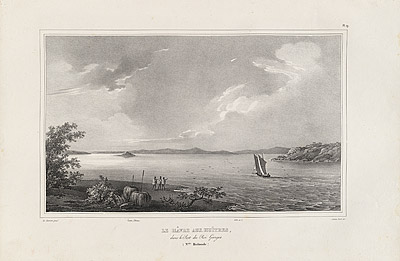 I've been uploading posts of the people and events behind my book The Sound over at my other website. You can click on the book cover for a look. Today though, I thought I'd put up the original statement, the seminal text if you like, of William Hook's testimony to Major Edmund Lockyer, on A WineDark Sea. This one page document is what the whole novel is based upon. Anyone who has read The Sound will see happenings and resonances: the Green Island killing, the Frenchman's compass, the fear and the hierarchies, the stolen child, and William Hook giving this information to the Major, the Major's son looking on with great interest, in a 'stinking golden tent'.

INFORMATION of William Hook, Native of New Zealand, Mariner and late belonging to the Schooner Brisbane of Hobart Town, touching the murder of a Male Native on Green Island, Oyster Harbour and King George’s Sound, and also forcibly taking away from the Main Land at Oyster Harbour four Male Natives, and landing them on Michaelmas Island in King George’s Sound, and there leaving them to perish, of the truth of which he, William Hook, voluntarily maketh Oath before Edmund Lockyer, Esquire, Major of His Majesty’s 57 Regt. Of Infantry, and Justice of the Peace of His Majesty’s Territory in New South Wales and Commandant of the Settlement at King George’s Sound, this Twelfth day of January, One Thousand Eight Hundred and Twenty Seven.

“That he, William Hook, being with the following persons at Oyster Harbour that composed the crew of a Boat employed sealing, John Randall Steersman, James Kirby, George Magennis and Samuel Bailey, with another Boat belonging to a Mr. Robinson of Hobart Town, and of which one Everitt was Steersman, the names of the crew he does not recollect, whilst there, had frequently been visited by the Natives, who were friendly, accompanying the Sealers fishing in their Boats, though the Native Women were never seen or came to the place where the Sealers were hutted.

That, about Eight Weeks ago, a French Man of War anchored in the sound and remained some time. That, one day after this Ship had left, Five of the Natives came to where their Boats stopped and requested to be taken to Green Island in Oyster Harbour to catch birds, when this Informant and another Man of the Hunter’s Boat, by name Ned, was ordered by John Randall and Everitt, the Boat Steerers, to take the Natives there and land them and come off, leaving them there, which they did; the Natives, perceiving the Boat going away, called out to the Informant to return, making all the signs possible for that purpose; but, having been ordered to leave them, Informant was afraid to act otherwise.

Next day Randall set out, accompanied by Kirby, Magennis and Bailey, armed with Guns and Cutlasses, soon after five OClock in the morning, and returned about Four or Five in the Evening bringing with them Four Native Women; that during their absence Informant was ordered to stay and take care of the Boat; during the night, two of the women made their escape though the Sealers had tied them two together by the Arms; next Morning both Boat’s Crews again went off armed, leaving Informant and another to watch the Boats; in the Evening they returned saying they had not seen any of the Natives or the Two Women that had made their escape, but had found hanging to the Trees at their encampment a Pocket Compass and a knife that had been given to the Natives by the Captain of the French Ship.

That, on the next day, Informant was sent with Ned and four others in the Boat to Green Island with a keg of water for the Natives; and, on the boats approaching the shore, they made a rush to get into it; the people in the boat shoved off to prevent them, and returned to the Party on shore, when four fresh hands got into the Boat, taking with them two Guns and two Swords and again went to the Island, and one Man got out to take a keg of water on shore; the Natives making a rush to get into the Boat, the Europeans resisted by striking them with their Oars and Swords; and, finding that they persisted, a Gun was fired with slugs over their Heads to frighten them, which did not answer; when a second shot was fired the Informant saw one of them fall forwards on his Face in the Water and the Blood spouting out from both his sides.

Kirby, who steered the boat, fired the first shot, but Informant cannot tell who fired the second.; the Boat was then shoved off and went to the Shore, and the next Morning Randall went again to the Island, and at first the Natives hid themselves; but on seeing Randall who was a great favourite with them, they came out and kissed him; he then took the four into his Boat, leaving the dead Body on the Island, and left Oyster Harbour and landed the four Natives on Michaelmas Island, and left them making great lamentations; Randall then went to Breaksea Island where the other Boat joined, bringing with them the Two Female Natives that they had taken away from the Main Land at Oyster Harbour.

One of these Females is now at Eclipse Island with Samuel Bailey, also a native Girl, a child Seven year old; the other Female taken from this is with George Magennis with the Boat to the Eastward; and this Informant further states that these men have other Native Women that they take about with them, Two from Van Diemen’s Land taken in Bass Strait and one from the Main Land opposite Kangaroo Island.

Image: Louis de Sainson from the French ship Astrolabe painted this picture of the channel at Emu Point, Green Island in the background, possibly within days of the events described above.
Posted by sarah toa at 11:39 AM