Freshening up the tower

Today while up the fire tower, I began drawings of landmark profiles, using former tower man Tim's work as a guide. His illustrations are now a bit dusty, mouldy and spider-spotted - it's been a five years since he drew them. But I've always loved looking up to the profiles when trying to get coordinates on a smoke. Part of what we do when spotting for fires is a compass bearing, with the tower as centre, and then an estimation of distance. Once we have these two elements, we can work out the exact location of the fire. Our map table has elevations, which helps us line up the distance of a smoke according to a nearby landmark. After that, it's all guesswork until the spotter plane goes overhead. The profiles help enormously, which is why I'm in the process of freshening them up. Here's the one from the western window of the tower that I did today. 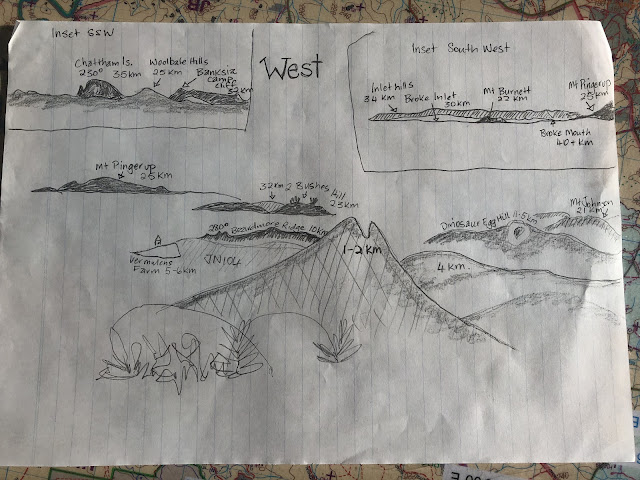 There's a new mobile phone tower right before Beardmore Ridge that I probably should have included. Phone towers are really useful because even though they're ugly, they stand out like dog's balls (both and the same maybe) and are great for judging distance. Spotter pilots and water bombers are wary of them and lighthouses during bushfires, for obvious reasons.

The Dinosaur Egg Hill is a granite peak and really charismatic to stare at. That hill at 1-2 kilometres west of the tower looks like you could reach out and touch it in real life. It's laddered with old growth karris and sometimes I can peer into that forest with binoculars and see bird's nests in the canopy and odd, secret caves. The farm is a good one because it is one of the few paddocks I can see in the national parks. And then there's the inlet where I live, in the south west inset - a sliver of silver before the primary dunes that protect it from the sea. Thirty kilometres away ... 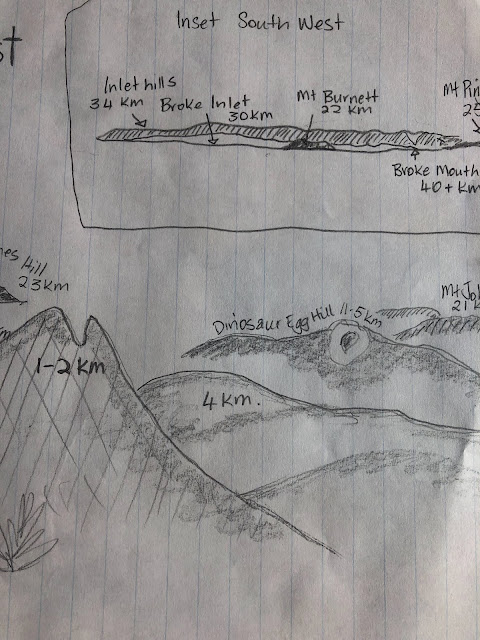 In between drawing, watching and listening for smoke reports from the spotter pilots, I quite often devolve into that daft mental friction of doomscrolling. I begin with checking the Emergency WA website for prescribed burns and bushfires on my phone, in case I've missed anything going on, and then somehow I end up on twitter.

The last few weeks have felt like I'm back to March 2020 anxiety levels, with more knowledge and less surety. If that sounds like an oxymoron, our little hermit state is set to open up to the rest of the world in a few weeks time. We've watched the world suffer and we've been so bloody lucky here, shut away, with lockdowns that rarely last more than a few days and that are usually triggered by a single community case. Out into the world we go, ho hum.

I will continue drawing these profiles. Over the next week or so, you'll get north, east and south.