It was a dark, dark moon when the Germinators, a most handsome, attractive, intelligent, sexy and charismatic selection of our local community, performed their first clandestine operation two weeks ago.
This anonymous group of Bombardiers bombed the Esplanade Hotel site, a derelict, cyclone fenced monstrosity, with balls of nefarious substances - namely clay, fertiliser and SEEDS. Lots of SEEDS - sunflowers, poppies, pumpkins, alyssum, chicory, parsley, rocket - so many different kinds of seeds that the lists goes on way too long for this post. (And I don't want yawns.)
It was highly secretive operation and so the combatants, many of them local celebrities, had to mask up. 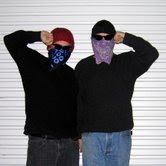 The after-party was even better (I am told). Lots of ideas about what name such a group subversive, attractive activists were tossed around.
"Guerrillas in the Mids!"
"The Inseminaters!"
"Tossers!"

It was also decided, over some light substance abuse and post-mortem excitement, that these activists would buy some cheap Russian or Burmese discarded tanks, with the aim of better distributing beautiful flowers to the fertile earth of ugly places.
Model aeroplanes and remote control four wheel drives, for reconnaissance and distribution purposes would also be employed.
Mrs Yin is currently in talks with the Burmese military. Every other (beautiful and highly intelligent) Germinator is now gainfully employed making mud pies in preparation for their next attack.
Posted by sarah toa at 4:13 PM