The Forester's Manual of the 1950s details the criteria in selecting men and women to serve as towermen ...

1. Must have good eyesight.

2.Must have reasonably good enunciation and good hearing for use of the telephone.

3. Must be capable of reading a map and learning the countryside visible from the tower.

4. Must become profficient in using the instruments and in furnishing reliable information.

5. Must be able to endure the necessary isolation and take care of himself and must be sober.

I love the 1950s language in the book 'Lookouts of the Karri Country. The instructions are a cultural artifact of their time. Although acknowledging that both men and women 'man' the towers or work the fire line, we still use phrases like 'men in attendance' (the somewhat misleading log book abbreviation is 'MIA') and 'towermen'. I do like that on radio support we are simply called 'Tower'. One of the first women I know who worked the tower I'm at now used to go up there when her husband had had enough after too many straight days. She'd carry her baby son up the mountain in a bassinet, watch for fires all day, while breastfeeding.

The firetowers around here are a mix of huts atop mountains, huts set into the crowns of the biggest tree in the forest and actual towers constructed of wood and steel. Here's one of the latter: (Bit a Kombi love down there too) 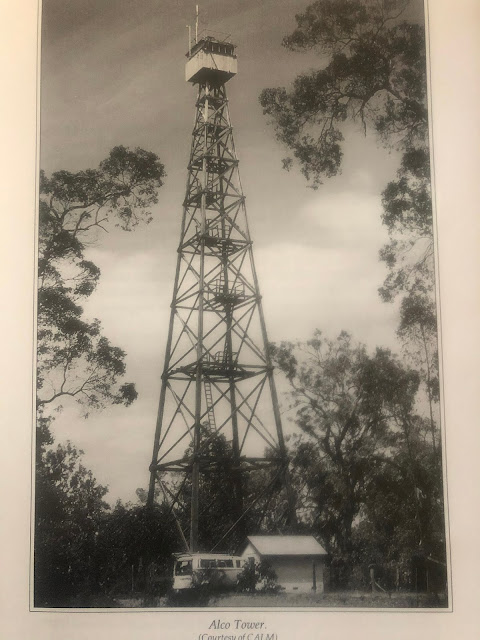 The point of firetowers is early smoke detection and the mapping of bushfires. We're up high and looking for smoke all day. When we call a smoke in, crew can mobilise on the ground and find it quickly. Yes, we have to be of sober habits, have good eyesight and be able to stay on the ball for hours, days, without losing our shit. * (See footnote)

In fire prone areas the forestry and land management mobs, who meandered between different government departments over the last century, got bushmen to create the towers. These men pegged their way up the hugest karri trees to find good lookout spots, climbed mountains or built towers. They would peg their way up a 100 metre karri, take out the crown and then carry up materials hand over foot to build a hut right at the top. Decades later, people began to realise (derr - in hindsight) that taking out the crown sickens the tree and makes it no longer structurally safe for a fire lookout and cuts short the life of the tree. Yes well of course ... but before we all pile on these people I'd like you to look at these photos. 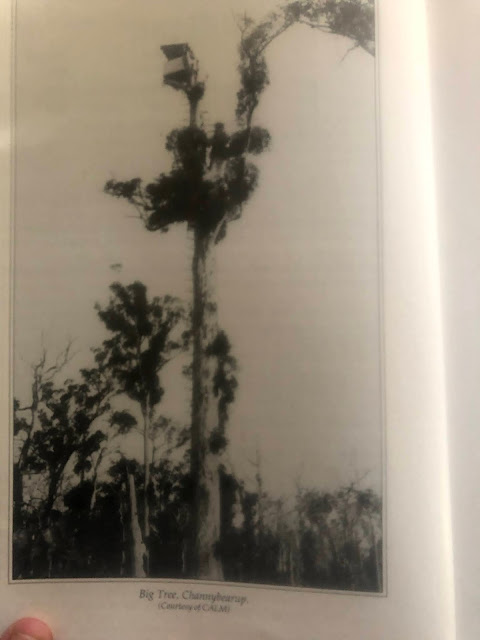 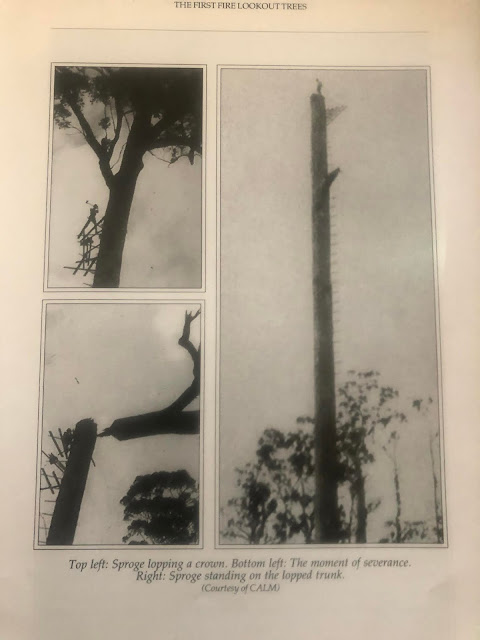 Each year that I'm on the tower, I begin the season with a medical, including vision testing. As I age, my vision range is changing. I find it hard seeing street signs while driving at night and yet I can see a plume of smoke at 35km and work out on the map exactly where it is.

!. At 8am he will obtain the early morning fire weather forecast and pass it on to neighbouring towers or divisions ...

2. Report the wind direction and strength and visibility in each of the four quarters of the compass to the District Headquarters.

3. Maintain a careful watch at all times for smoke.

There are more instructions for towermen and many of them haven't changed. Forest grid mapping and Alpha, Bravo, Charlie universal alphabets still remain. We still record wind direction and speed every hour, the relative humidity and temperature too.

Tourists walk up the mountain to the tower now. It's a major southern forests tourist trail. They're often amazed to see me here. They express that this system must be so antiquated, what with drones and spotter aircraft. They think I must be a volunteer. When I'm windexing the windows of the tower to see more clearly, they think I'm a government-hired cleaner.

I sit up here and watch the eagles circle, looking for prey. I look for smoke. I compete every day with the spotter pilot - ours is a blood sport borne out in the smoko room. Their gig is a twice daily circuit of the area and pilot prestige. My gig - all day, sitting up in the clouds on top of a mountain, watching, looking, seeing.

* 'Camping out in a hut at the base of the tower could also become trying. But boredom, especially on days of little activity, was the major problem. This could result in depression known as 'Towerman's Syndrome', which cropped up in most forestry districts towards the end of every fire season, and was difficult to counter.' p.30