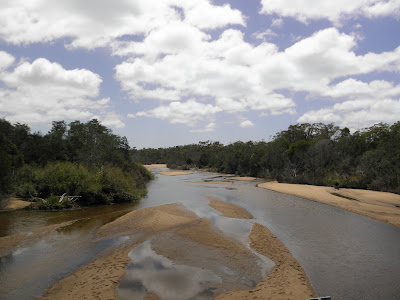 On my recent trip to Tasmania I stayed the night with a woman who is descended from the Bass Strait Islanders (in fact she is an islander herself and her husband is a fisherman from those parts). Patsy and Graeme live on the north coast in a village called Tomahawk and she took me for a 'history' drive around the north east coast.

Above is the Ringarooma River, the border of the great chief and warrior Manalargena's country. Rohan Wilson wrote a ripping yarn recently with Manalargena as the main character. You can read my review of his book here. Patsy told me that the Ringarooma used to be a big, deep river; in the tradition of Tasmania and New Zealand's great rivers; but that it has been silted up because of industrial work upstream.

We passed Mt William, where the Pallawah men would light fires to communicate with the Tyreelore, the clanswomen who had been stolen by the sealers to live on the islands of Bass Strait. 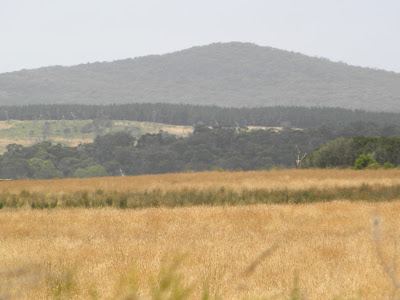 .... and several trees that folk used to bury their dead within ... 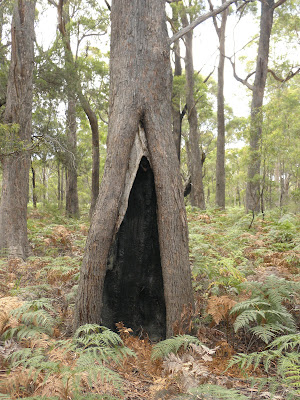 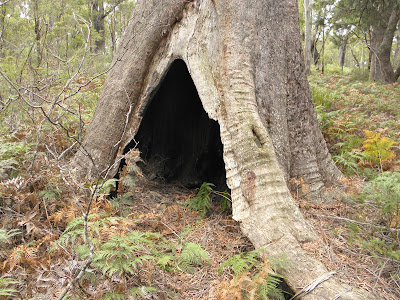 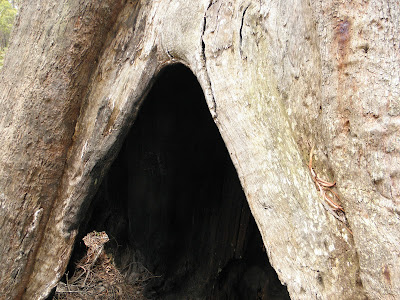 At Gladstone we stopped to eat a muttonbird pie. This was the height of my Tasmanian experience. Muttonbird pies are full of oily, red meat from the islands, with peas and carrots and a gorgeous crusty pastry to die for. All from a servo in a town out the back of nowhere. When I lived in Tasmania we used to buy the fresh muttonbird carcasses from road side stalls and roast them. One each. We'd carve up a shearwater each on our plates. It was fishy, gamey meat.
Patsy said to me, "They weren't called muttonbirds because they tasted like mutton. Mutton was the name for meat, any meat. Mutton fish was the name for abalone, remember?"

We headed up to Policeman's Point, near Anson's Bay, where there was a historic meeting between George Augustus Robinson and the local tribes. (c1831)

Robinson's job as the 'conciliator' was to bring in the Tasmanian tribes during the Black War, get them out the way of the settlers' and the Van Diemen's Land Company guns, 'pacify' the warrior tribes who were attacking land grabbers and other random whites - and take them to the Promised Land, Flinder's Island, or another island. Any island.

Here is a sobering fact when considering the circumstances of this particular meeting. During the Black War in Tasmania, the ratio of Aboriginal deaths to European deaths was roughly 2:1. On the Australian continent, the ratio of deaths during frontier violence was (a heavily disputed and argued) 20:1. Number crunching is tricky stuff. The argument about numbers when it comes to colonial killings in Australia can be an odious practice. But whatever the way that us contemporary historians explain it, it is obvious that the Pallawah fought hard for about eight years. 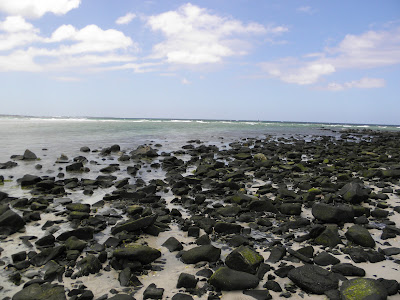 Policeman's Point was the place where one of the chiefs (and I think it was Manalargena but I could be wrong) met with Robinson and agreed to help bring in the last of the Pallawah tribes. By then the Pallawah warriors were exhausted with war and they'd seen a huge number of their people struck down by disease, namely the common cold. The Europeans had carried off most of their childbearing women.

Truganina would have been at Policeman's Point that day. Walyer the warrior woman was probably up at Cape Grim causing havoc with her muskets and spears and siblings. I think Peevay and Wooreddy were there, at the meeting.

It was poignant, standing on the point where the inlet rushed out to the sea and hearing Patsy tell the story of that meeting at Policeman's Point. Sea lettuce crawled all over the black basalt. Patsy went looking for penguin shells to string up into necklaces and I fell in love with bull kelp all over again. It was a singular experience to walk where such a history unfolded. 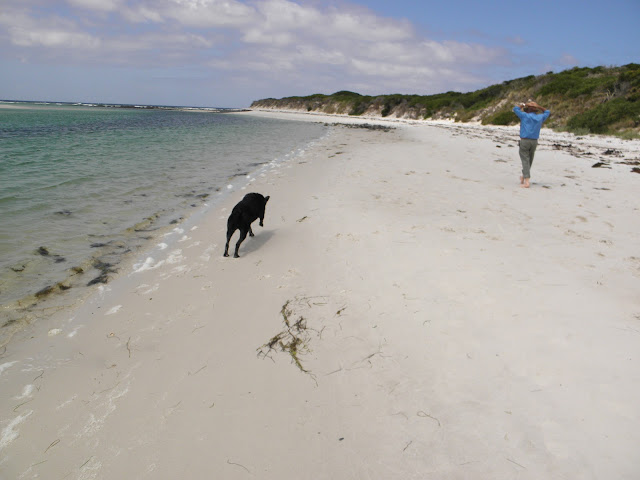 Labels: on the road again, Pallawah