He looked at her when he was straight. He’d look right at her, something else running through his mind. Just stared with water eyes straight at her.
You’re the quick one. You are clever. A herring queen, you are. Not like that dozy wench.
Dozy wench, said Weed.

Go on. Hold the wood for me, Weed. Don’t be afraid. Hold it like this.
He placed her hands with his red, freckled fingers so her thumbs reached the centre of the log.
She held the piece of wood and he swung the axe. She moved both thumbs and watched the axe bite into where they had lain a moment before. The log cleaved in two, spilling with startled ants.
You a brave girl, Weed. Brave. He nodded approval at her and stumped up the hill, swinging his axe and whistling.

Old Salt and I spent delightful morning yesterday cruising around Limestone Head, trolling for salmon and bonito. At Bald Head, the autumn glass-off ceased. It's always a game changer, Bald Head. The ocean turned a deep, gunbarrel grey. The boat started reacting against a new swell that slammed into the headland, creating a chaotic backwash. Suddenly I couldn't find my feet. I looked to where the Southern Ocean is only briefly quelled by Eclipse Island. Birds worked schools of sardines, which meant bigger fish beneath but I really didn't want to head around there. 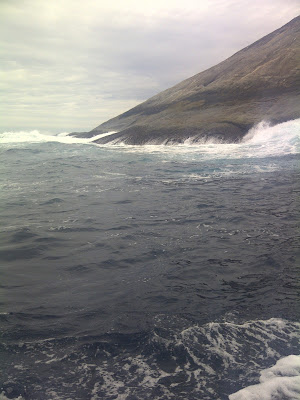 In the afternoon I went back to the thesis and in particular, the scenes on Eclipse Island where the sealer Samuel Bayley took a young Menang woman and another of his Aboriginal abductees, little Weed, in 1826. They were alone on the island for weeks with Bayley, before Lockyer acted on William Hook's testimony and sent his man out there to rescue them. No one, no one, knows anymore what happened out at Eclipse, except that the Menang woman returned to King George Sound in a shocking physical and emotional state. Weed was put on the Amity with her abductor and sent to Sydney.

I've been avoiding writing this chapter. There are only so many reasons why a grown man would abduct two girls, one an adolescent and the other seven years old, and imprison them an island. I wrote some nasty stuff today and I'm feeling a bit fucked up tonight. In the last few months I've researched Stockholm Syndrome and literary renditions of pedophilia and infanticide for the non fiction section of my thesis. It sounds weird but writing fiction about these things is much harder and more personal. Sometimes I wonder how writers, male or female, cope with what they are channelling (because writing fiction, when it's really cranking, is definitely channelling, and I think that is the rub). Margaret Attwood depicts beautifully the bruised but pragmatic sensibilities of abused sex workers in both Oryx and Crake and The Year of the Flood. She also took the unusual step of auctioning off character's names for Flood, to fund international victims of torture.

On 1820s Bass Strait, G.A. Robinson met sealers who took girls to live with them. Monroe, the self-proclaimed policeman of the Straits, 'cohabited' with a Pallawah girl since she was an infant. It's difficult to tell past Robinson's anti-sealer rhetoric as to whether some of the Straitsmen were honouring a traditional Aboriginal sensibility where they assumed maintenance of a potential bride for a decade or so before they were actually married, or whether the men were just outright pedophiles who wanted workers and concubines but didn't want to deal with offspring. One academic colleague in Launceston stays vehemently with the latter.

On a lighter note (phrew!), today I took an internet psychopath test and realised that I'm definitely not one, though in a moment of spectacularly poor judgement, I probably nearly married one once. I have decided to portray Bayley as possessing the qualities of what these days would described as psychopathic. Manipulative, insensible to ethics, punishment or the feelings of others. In other words, he never signed the unspoken social contract that the rest of us unwittingly adhere to for our own safety. My layman's diagnosis of this character has helped me into and beyond whatever happened on Eclipse Island during those weeks.
For the moment.